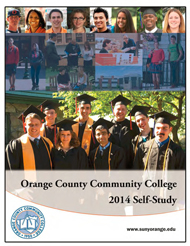 Orange County Community College completed its most recent accreditation process when it prepared its 2013-2014 Self-Study for reaccreditation by the Middle States Association of Colleges and Secondary Schools.

This webpage was created at that time to provide the faculty, staff and students of Orange County Community College with a central location to obtain information about the College's Self Study.

WHO was Involved in the Self-Study Process?

Orange County Community College assembled a strong team of faculty and staff who were committed to the self-evaluation of the College’s programs and services in order to identify ways to improve so that the College could better serve students and the community.

The Self-Study Steering Committee was comprised of 13 total members representing faculty, staff and students; the Committee was led by 2 co-chairs. Additionally, the Colleges's President Dr. William Richards, the Chairman of the Board of Trustees and the Vice Presidents provided leadership through their roles as ex-officio members.

There were 8 Working Groups with nearly 60 members representing faculty, administration, support staff and students that determined the extent to which the College complied with the 14 Standards of Excellence.

Orange County Community College's Self-Study Design was approved by Dr. Ellie Fogarty, MSCHE liaison, in April 2012. The Self-Study Design served as the College's "blueprint for the self-study process and for the final self-study report. It guided the Steering Committee and Working Groups in their discussion, research and writing."

The College submitted its Substantive Change Proposal to the Middle States Commission on Higher Education in September 2010 for review and recognition of Newburgh as a branch campus.