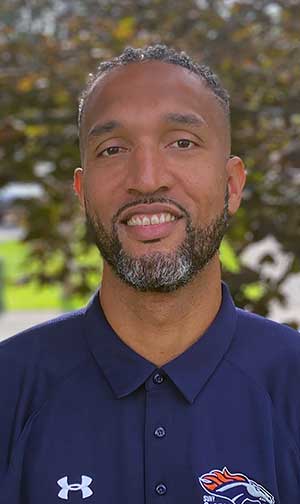 Brand, who has spent the past two seasons as associate head coach for the SUNY Orange men’s hardwood squad, takes over a successful program that had been under Lauro’s tutelage for the past 11 years.

“I have been impressed by Micah’s work with Tom and our men’s players, most of which occurred during the pandemic,” Smith said. “He was an outstanding player himself and he understands what it takes to be successful on and off the court. I’m confident he’ll build strong connections with our players, help them get the most out of their abilities and put them in position to compete for championships.”

From 2003 to 2013, Brand played professionally overseas. He spent time in 14 countries and helped his teams win a pair of league championships. He was the Korean Basketball League’s “Import Player of the Year” in 2009. He was named to the Arab Championship all-tournament team in 2010. He was an all-league selection seven times, named “Center of the Year” twice and earned “All-Import Team” distinction on a dozen occasions.

He played collegiately at the University of Massachusetts from 1999 through 2003, where he was selected third-team All-Atlantic 10 in 2001 and was named Most Improved Player that same year.

Brand earned his master’s degree in applied behavior analysis from Capella University and his bachelor’s degree in psychology from UMass-Amherst.