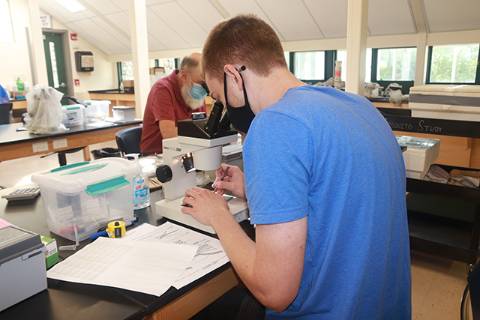 When birds began falling out of the sky in 2000, the scientists at the Center for Disease Control and Prevention were concerned, and stumped to find a cause. Through collaboration with state and county health departments, researchers were sought who could get to the root cause of the challenge by putting out a call for partners to conduct the necessary studies.

When faced with similar challenges, many government agencies partner with corporations. Some elect to conduct the research themselves, while others develop joint ventures with major four-year research universities.  But Orange County Department of Health officials chose a different route. The OCDOH chose to partner with SUNY Orange!

“This collaboration with the OCDOH is nearly unprecedented for a community college,” said Dr. Michele Iannuzzi-Sucich, professor of biology and mosquito surveillance project coordinator.  “Typically, research opportunities like this are only afforded to students at larger research universities.  We are fortunate that SUNY Orange is able to provide this chance for students to gain meaningful experience that will carry over to their continued studies and future professional pursuits.”

When Orange County came calling in the early 2000s, SUNY Orange quickly assembled a team of student researchers led by Tom Alford, then a professor of biology and now a professor emeritus. He was joined a year later by Marie DeFazio-Schultz, a technical assistant in the Biology Department at the College.

The faculty-supervised, student-run team began collecting and testing mosquitos, and learned that the cause of the pandemic was the result of West Nile Virus.

Fast forward more than two decades, and the SUNY Orange mosquito surveillance project is still going strong. Coordinated by Iannuzzi-Sucich with teaching oversight provided by Alford, DeFazio-Schultz, and John Kokas, a retired entomologist for the NYS Department of Health who joined the team in 2017, the faculty triumvirate has helped dozens of SUNY Orange students gain valuable experience in both research and public health, as the program gathers thousands of mosquitos between June and October each year.

Utilizing traps throughout Orange County, locations of which are kept confidential as part of the team’s contract with OCDOH, the students collect their specimens, place them in dry ice, and then examine each of the mosquitos under a microscope to determine the specific species. Those species with a history of transmitting disease are then sent for further testing to New York State DOH labs in Albany, which in turn shares the data with the CDC and Orange County. In addition to West Nile virus, the student research team has uncovered mosquitos that transmit the Zika virus, and now regularly look for mosquitos capable of transmitting any disease.

The program employs between three and six students each year who gain invaluable experience to help them build their resume with paid, professional research experience. 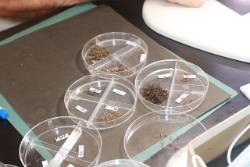