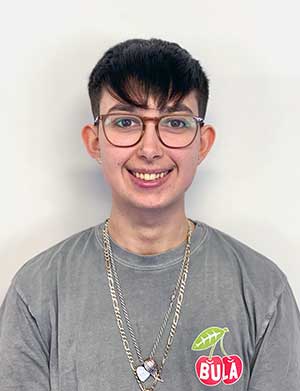 Students are nominated for the academic team by their college administrators. Selection is based on academic achievement, leadership, and engagement in college and community service. Selection is based on scores the student earned in the All-USA Academic Team competition, for which more than 2,000 applications were received this year. This program is sponsored by the Coca-Cola Scholars Foundation and is administered by Phi Theta Kappa Honor Society, the national honor society for students at two-year institutions.

When Mangiameli graduates this May with a business administration degree, he will have completed a somewhat non-traditional educational path by having first attained his High School Equivalency (HSE) at SUNY Orange in 2018 before enrolling full-time in 2019. He serves as president of SUNY Orange’s local PTK chapter, is president of the Sexuality and Gender Alliance (SAGA) student club and is a member of the Business Club. He has been a volunteer firefighter since he was 16. At the same time, he began working for an area accounting firm and now serves as the office manager.

He is an active advocate for those in need and volunteers for many humanitarian efforts that support a variety of communities. He has been a strong student voice at SUNY Orange on behalf of the LGBTIA+ community and this year led a discussion on understanding the impact of using and misusing preferred pronouns. He has led a partnership between PTK and Fearless! Hudson Valley to supply people and families of domestic abuse with essential items. He is also coordinating fundraising efforts to help the College install free menstrual product dispensers and displays on both campuses to expand access for the College community to products that are not free or covered by government assistance programs.

After graduating from SUNY Orange, Mangiameli intends to transfer to a four-year university to continue his education in business, with a focus on finance and women and gender studies. His long-term goal is to partner his small business with organizations that promote unity. He’d also like to open a community center for minority groups to give them a second chance at life.

He will be recognized during the All-New York Academic Team luncheon scheduled for Noon on Wednesday, April 13 at Onondaga Community College. All Coca-Cola Scholars will also be recognized internationally during Phi Theta Kappa’s annual convention in Denver, Colo., on April 7-9.

“Cayden is truly deserving of this honor,” said Dr. Kristine Young, SUNY Orange president. “Not only has Cayden excelled at the highest level in the classroom, he has been an active presence in student life at the College, even in the midst of the pandemic. Cayden is an amazing student, leader and person, and has a bright future ahead. I also commend our Business Department faculty for supporting Cayden and helping him along his way to this outstanding achievement.”

“The Coca-Cola Scholars Foundation has a long history of providing financial assistance to outstanding students at community colleges,” said Jane Hale Hopkins, President of the Coca-Cola Scholars Foundation. “We are proud to partner with Phi Theta Kappa to make it possible for more deserving students to achieve their educational goals and support tomorrow’s leaders of the global community.”

“We thank the Coca-Cola Scholars Foundation for recognizing these student leaders and for investing in their futures,” said Dr. Lynn Tincher-Ladner, President and CEO of Phi Theta Kappa. “Scholarships like these are integral to the success of these students in reaching their educational and career goals.”

About the Coca-Cola Scholars Foundation

Phi Theta Kappa is the premier honor society recognizing the academic achievement of students at associate degree-granting colleges and helping them to grow as scholars and leaders. The Society is made up of more than 3.8 million members and nearly 1,300 chapters in 11 countries, with approximately 240,000 active members in the nation’s colleges. Learn more at ptk.org.