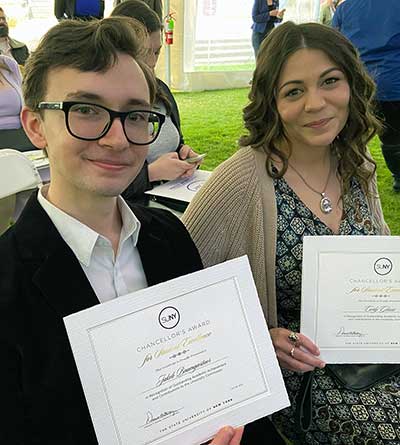 In all, 180 students from 61 two-year and four-year campuses across the SUNY system were recognized by the Interim Chancellor on Tuesday (April 26).

“Now more than ever, it is time to celebrate the accomplishments of our students who have helped one another get through this global pandemic and focus on getting the most out of their college education, and this year’s CASE winners are at the top of the class,” Stanley said. “It is my great honor to celebrate the fortitude, leadership, and achievements of this year’s winners, and I applaud their hard work and desire to do more for their campuses and fellow students. I, for one, can’t wait to see what they do next.”

Baumgartner (left, in photo), of West Point, will graduate in May with a degree in engineering science. He is a member of the SUNY Orange Honors Program and is actively involved in the College’s chapter of the Phi Theta Kappa honor society as well as the Engineering Club. He received the Presidential Honors Program scholarship as a freshman and just recently presented his Honors Program capstone project research into the ethics of photographing refugees and other vulnerable groups during the Northeast Regional Honors Council conference in Philadelphia, PA.

He serves as a student representative on the Honors Advisory Board and is a lead peer mentor for the Honors Program. This past February, he led an initiative among his fellow Honors students to create and distribute cards to local veterans in conjunction with outreach coordinated by U.S. Congressman Sean Patrick Maloney. He volunteers regularly at the West Point Stables and Kennels, and is a developing amateur photographer who has volunteered his services in support of several SUNY Orange Foundation events.

Earlier in April, he was informed that his SNY Orange team for the Community College Innovation Challenge was named as one of 10 finalists, and will be attending the Innovation Challenge Boot Camp in June in Arlington, Va. Baumgartner will be transferring to SUNY New Paltz in the fall, joining both the Honors Program and a five-year bachelor’s/master’s program, pursuing a bachelor’s degree in computer engineering and a master’s degree in electrical engineering.

For Glassé the Chancellor’s Awards continues a spring haul of prestigious awards. Two weeks ago, she was heral;ded  among the state’s top academicians when she was named first-team all-state as part of the USA Today Phi Theta Kappa All-New York Academic Awards ceremony held in Syracuse. In March, she was selected as one of just 20 community college students nationally to be named to the All-USA Academic Team, becoming the first SUNY Orange student ever to make that list. She will be recognized during PTK’s Presidents Breakfast, held at the American Association of Community Colleges (AACC) Convention on Monday, May 2 in New York, N.Y. She is also a semi-finalist for the prestigious Jack Kent Cooke Foundation Transfer Student Scholarship.

Glassé, who attended Warwick Valley High School and resides in Goshen, serves as the student representative to the SUNY Orange Foundation Board of Directors and is a member of the Foundation Board’s Alumni Committee. She is also vice president of both the College’s chapter of PTK as well as the Business Club.

In 2019, Glassé was presented with the Rising Star Award from the Orange County Junior League. The award recognizes men and women, between the ages of 21 and 41, who demonstrate outstanding leadership skills in their community, from the public, private, non-profit and/or volunteer sectors. A year later in 2020, she received the Orange County Mental Health Association Volunteer Service Award.

The Chancellor’s Award for Student Excellence was created in 1997 to recognize students who have best demonstrated, and have been recognized for, the integration of academic excellence with accomplishments in the areas of leadership, athletics, community service, creative and performing arts, campus involvement, or career achievement.

Each year, SUNY campus presidents establish a selection committee, which reviews the accomplishments of exemplary students. Nominees are then forwarded to the Chancellor’s Office for a second round of review. Finalists are then recommended to the Chancellor to become recipients of the award.

A complete listing of student recipients is available online at https://system.suny.edu/university-life/student-excellence/.