MIDDLETOWN, N.Y. – The Colt Athletic Hall of Fame celebrated 10 years of recognizing athletic excellence on Saturday, Nov. 12, when it inducted the Class of 2022 during a morning ceremony at Stony Ford Golf Course in Campbell Hall.

A capacity crowd of 110 attendees gathered to welcome the Hall of Fame’s eighth induction class: Mike Casabona ’10 (baseball), Shannon Donohue ’06 (softball), Terry Foster ’67 (men’s basketball), Natalie Griffin ’98 (volleyball) and James Hannigan (D) ’53 (wrestling), as well as the 1999 softball team. Ten of the 13 members of the 1999 team (shown below) were in attendance.

Casabona was a standout shortstop for the Colts baseball team in 2009 and 2010. He was one of the main cogs for back-to-back Colts squads who finished as 2009 Region XV runner-up before capturing the Region XV championship in 2010. A leadoff hitter and standout defensive player, Casabona was named to the Mid-Hudson Conference and Region XV all-star teams during both of his seasons at SUNY Orange. He was selected as the Mid-Hudson Conference Most Valuable Player in 2010 and was tabbed as the Region XV Defensive Player of the Year in 2010.

He batted .388 as a freshman and .410 during his sophomore campaign, and ranked among the team’s leaders in every offensive category. As good as he was offensively, he was even better as a defensive shortstop. Blessed with great range and a very strong throwing arm, he made outstanding plays look easy. He went on to play for two years at perennial national power SUNY Cortland where he received his bachelor’s degree in management.

Donohue authored an impressive two-year softball career. She dominated Region XV as both a pitcher and a hitter, leading the Colts to the Mid-Hudson Conference, Region XV and District III championships in 2006. She also helped the 2006 Colts advance to the NJCAA National Tournament in Normal, Ill. The Colts lost 4-0 to Kankakee Community College (Illinois) in the opening round game. Donohue was twice named to the conference and regional all-star teams. Following graduation, she went on to star at St. Thomas Aquinas. She returned to SUNY Orange in 2011 to serve as the team’s head coach for one season.

Foster played men’s basketball at SUNY Orange in 1966-67, starting all 31 games that season while helping the Colts compile an impressive 23-8 record. He scored 14.5 points per game for the Colts and grabbed 13.25 rebounds per game, setting a Colts’ rebounding record that would stand until 1986. Foster still ranks fourth all time in rebounds per game. He went on to serve in the United States Army before continuing his academic and basketball careers at Old Dominion University in Norfolk, Va.

Griffin is a 1998 graduate of SUNY Orange and starred for the women’s volleyball team during the 1996 and 1997 campaigns. After a standout season in 1997, Griffin was selected first-team All-Region XV and became the first Colt volleyball player ever to be named to a National Junior College Athletic Association All-American team when she received first-team recognition. She helped the Colts win the Region XV Championship and advance to the NJCAA National Tournament in 1997. She is currently a mathematics teacher and SUNY Orange instructor at S.S. Seward Institute Junior/Senior High School in Florida, N.Y. She also has been coaching volleyball for the past 23 years and is currently the head coach of the volleyball program at S.S. Seward, after having taken over the varsity head coaching position in 2011.

Hannigan graduated in 1953 and was a two-year performer at 147 pounds for the wrestling team. He was instrumental in helping to establish the College’s wrestling program, joining 2013 Colt Athletic Hall of Fame inductee Achilles “Kelly” Rossi and Nick Camporelli to get the program started in 1951. Hannigan forged a 6-2 record during his two seasons and set the College’s record for fastest pin (30 seconds). He served as secretary of the College’s first Varsity Club. Following graduation, he went on to earn a bachelor’s degree in marketing from Pace University and was a manager of computer software for Mobil Oil Corporation.

Following his retirement, he joined the coaching staff at Hendrick Hudson High School. He served as ski coach as well as coach for the indoor and outdoor track teams. Over four seasons as head coach of the girl’s track team, he guided the squad to two championships. He also coached boys modified soccer in Croton-on-Hudson.

The 1999 SUNY Orange softball team, guided by head coach Stacey Morris (a 2015 inductee into the Colt Athletic Hall of Fame), forged a stellar 34-7 record. The Colts posted an unblemished 10-0 record to win the Mid-Hudson Conference championship and were a perfect 24-0 against Region XV teams en route to the regional title. The team advanced to the National Junior College Athletic Association national championship tournament, where it finished third.

Caption for photo above: The SUNY Orange Colt Athletic Hall of Fame inducted the Class of 2022 on Nov. 12. Five individuals along with the 1999 softball team were inducted, including: (front row from left), Natalie Griffin ’98 (volleyball), Stacey Morris ’89 (head coach representing the 1999 softball team) and Shannon Donohue ’06 (softball), as well as (second row, from left), Mike Casabona ’10 (baseball) and Terry Foster ’67 (basketball). In addition, James Hannigan ‘’53 (wrestling) was inducted posthumously. 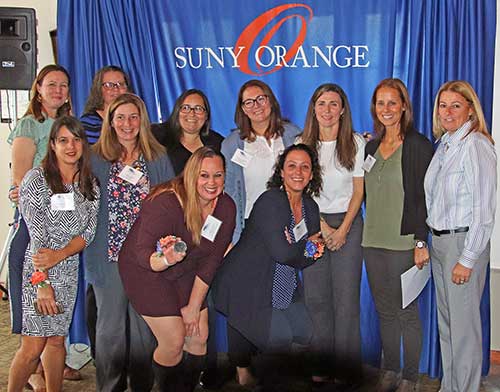