Life presents many challenges and opportunities which lead to new interests and conceptualizations. With each

new timeframe of life, visual artists may approach ideas and express themselves through painting, drawing, sculpting, and creating with mixed media and unconventional materials and methods.

Frank Shuback is a local artist who was born in the Black Dirt area of Orange County in Pine Island and went on to study art at Bard College, Annandale-on-Hudson and Parsons School of Design, Greenwich Village, NYC with Orange County Community College in between. Frank Shuback has shown his works in many solo and groups shows in New York State, New York City, and Pennsylvania. His artworks have also been included in public collections in New York City and upstate New York.

He has experimented with various materials and styles during his eighty years. His solo show in the Mindy Ross Gallery in Kaplan Hall intermingles two eras in his artistic life: his geometrical drawings of the early eighties of the twentieth century and three-dimensional works of recent years in this twenty-first century. His paper works have been preserved exquisitely on archival paper in archival boxes. His three-dimensional pieces are most often made of found objects of mixed media.

Paper Work with Recent Sculpture is a “captive” exhibit in the Mindy Ross Gallery March 13 through May 31, 2020. However, Kaplan Hall on the Newburgh campus of SUNY Orange is closed. Consequently, a virtual tour has been created to bring the exhibit to you. Check out the full video on YouTube.

Questions may be directed to Cultural Affairs at cultural@sunyorange.edu
Information is available through the website at www.sunyorange.edu/culturalaffairs 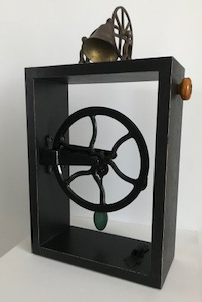