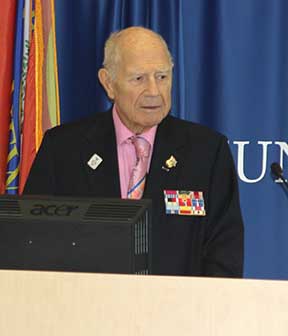 Innovation Grand Street received a significant infusion of $1.83 million in Empire State Development Corporation funds on Dec. 18 and the retiring Senator’s acquisition of the SAM grant, administered by the Dormitory Authority of the State of New York (DASNY), adds to the growing local and state support for the College’s visionary project.

Innovation Grand Street will focus upon four industry sectors and is intended to spark private investment and entrepreneurial activity in the City, create meaningful employment opportunities for local residents, rejuvenate the greater Newburgh community and connect the College’s curriculum to real-world experiences for students.

At the core of the project is the renovation of three historic and iconic buildings adjacent to the College’s Newburgh campus that, when refurbished, will allow for small business creation, spark economic development, and blend short-term workforce training with complementary academic opportunities.

“Now more than ever the greater Newburgh community must be a leader in innovation, creativity and public/private partnerships,” Larkin says. “This investment of your tax dollars into an institution such as SUNY Orange will help to accomplish this mission and much more. SUNY Orange, which has become the heartbeat of the City of Newburgh, is a shining example for the State of New York and our nation when it comes to innovative programs that lead to the revitalization of our communities.

“I feel blessed to have the opportunity to support what will become a life-changing program for so many students and their families here in the Hudson Valley.”

“From the outset, Senator Larkin has shared our vision for this project,” explains Dr. Kristine Young, SUNY Orange president. “This is yet another example of his commitment to higher education in general, and the College in particular. We could not have built the Newburgh campus without his support, and his backing of countless other projects and programs at SUNY Orange over the past four decades has been invaluable. It seems only fitting that one of his final announcements as Senator is to stand united with the College, the County and the City in this endeavor.”

“We are building momentum behind the vision of Orange County and SUNY Orange to create jobs, put these buildings back into productive use, and improve Newburgh,” says Orange County Executive Steve Neuhaus. “Senator Larkin has been an integral part of the development of the SUNY Orange campus in Newburgh. Senator Larkin knows, as he has always shown, that education and economic development go hand in hand. We appreciate this support, along with his decades of leadership in Orange County.”

“Senator Larkin’s endorsement of a project like Innovation Grand Street brings instant credulity and credence,” adds Fred Watson (at right in photo), chair of the SUNY Orange Board of Trustees. “His constituents trust his judgement and know that he will only lend his voice to projects that will positively shape the future of his district and the Hudson Valley. That has been the case throughout his career. Our Board has always known we have a friend and advocate in Bill Larkin, and for that we have long been grateful.”

With the SAM grant in hand, the College now has eclipsed $2.03 million in dedicated funds toward the project’s Phase I budget of $9.16 million. Set to be completed in two phases, Phase I of Innovation Grand Street calls for renovations to the Masonic Lodge (48 Grand St.) and the American Legion building (62 Grand St.). The YMCA building (54 Grand St.), located between the Masonic Lodge and American Legion facilities, would be upgraded as part of Phase II.

Once restored, the buildings will provide space for training and programming that supports specific needs for an educated workforce, while at the same time providing guidance on how to effectively create a small business, within the four targeted industry clusters: entrepreneurship, innovation and business; food, beverage and entertainment; healthcare and wellness; and creative design and historic preservation.

“Last week’s award from the Empire State Development Corp. represented an overwhelming statewide endorsement of the Innovation Grand Street project, and today’s announcement brings additional momentum to the College and Foundation as we continue this early work on the project,” says Derrik Wynkoop, chair of the SUNY Orange Foundation Board of Directors. “We greatly appreciate Senator Larkin’s support of Innovation Grand Street, and we celebrate his longtime loyalty to those communities and citizens he has represented.”

Larkin, who will be retiring when his current term ends on Monday (Dec. 31), has been serving others for more than 70 years. He is a combat veteran of World War II and the Korean War who served for 23 years in the United States Army before retiring as a lieutenant colonel.

“Bill Larkin is the epitome of a selfless civil servant and his impact upon our region is immeasurable. Generations of area residents will continue to prosper because of his commitment to making the Hudson Valley a better place to live and work,” adds Steve Brescia, chair of the Orange County Legislature. “He has been a valued partner to the Legislature, and we appreciate that one of his last acts in Albany is to secure funding that will improve workforce training and economic development in the City of Newburgh.”

Over four-plus decades, Larkin has passed many pieces of landmark legislation while providing unmatched leadership in government as well as the community he represents. Additionally, he garnered critical capital funding for municipalities, school districts and nonprofit organizations that has led to infrastructure improvements and grant projects all across the Hudson Valley. He has also supported improvements to healthcare, higher education and social services that have impacted the daily lives, health and well-being of his constituents.

He is a member of the Genesis Group, which founded the National Purple Heart Hall of Honor in New Windsor. Larkin also initiated the campaign to create the Purple Heart Forever stamp. He has received countless community awards, organizational honors and military commendations throughout his career.

SUNY Orange and the SUNY Orange Foundation will continue working to secure additional state and federal grants, in addition to pursuing private-sector support, for the Innovation Grand Street initiative.