IN THE NEWS: Innovation Grand Street

IN THE NEWS: Innovation Grand Street 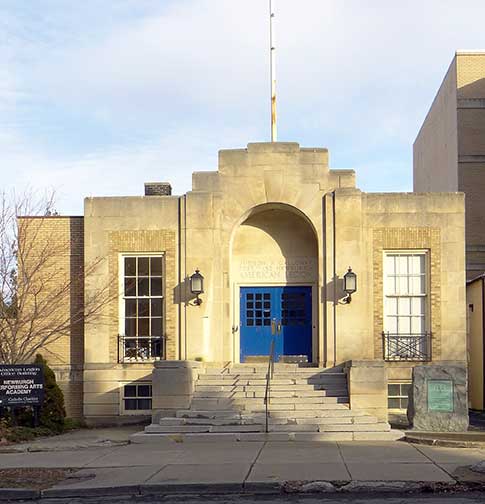 This story was written by Chris McKenna and appeared in the Feb. 11 edition of the Times Herald-Record

CITY OF NEWBURGH - The ornate auditorium on the third floor was once used by a local Masonic order for ceremonies or meetings, or whatever it was that the secretive fraternal organization did inside its century-old building on Grand Street.

Surveying the stately room, frigid without heat but still painted in striking colors and decorated with hanging light fixtures, SUNY Orange President Kristine Young spoke about a host of potential uses for that long-vacated space.

Maybe it could be a dining room to train workers for the hospitality industry, or a wedding hall that would help a new local business get off the ground.

SUNY Orange, the Middletown-based community college, is embarking on an ambitious project that would extend its Newburgh branch campus by turning three adjacent buildings on Grand Street into college-run job-training centers and business incubators.

The buildings - all built of brick and stone more than 80 years ago and now owned by Orange County - line the block next to the Kaplan Center, the 87,000-square-foot structure that opened in 2011 as part of an $85 million campus expansion and makeover.

First up are the Masonic Lodge and the American Legion hall.

The college and the foundation that supports it plan to completely overhaul the two buildings at an estimated cost of $9.2 million, including the designs and other non-construction expenses.

Piece by piece, Young and the other organizers have been lining up the funding, including a $1.8 million state grant awarded in December and a $1 million gift from a private donor who used to live in Newburgh.

As of last month, planners said they were 70 percent of the way toward their funding target.

The college plans to renovate the third building - a three-story YMCA built in 1915 - in a second project phase after the first two buildings have been put to use.

The college and its foundation envision leasing space in the buildings to local businesses for training new workers.

They say they have gotten the interest of both existing employers like St. Luke’s Cornwall Hospital and Orange Regional Medical Center; and future ones like Amy’s Kitchen, which is building an organic-food plant in Goshen; and operators of the Legoland theme park that’s also under construction in Goshen.

Young said she foresees short-term training for immediate jobs to be one of the Newburgh buildings’ main functions, rather than traditional, degree-granting programs.

Though students later may be drawn into more-advanced studies, she believes training programs that last about 12 weeks and are accessible on foot or by bus in Newburgh would serve a major need in the area - and “a different profile of a student.”

“It’s what we are supposed to be doing, and I am passionate about where we’re doing it,” she told county lawmakers during a presentation last month.

The next step is determining future ownership and control of the buildings, which the county bought for $3.6 million in 2014 for the college’s future use.

The college plans to seek the Legislature’s approval for option agreements in which the buildings eventually would be turned over to the college’s nonprofit arm, once the college has lined up tenants.

Young said she hopes to start renovations this fall and begin occupying the buildings in 2020.

“When we’re firing on all cylinders,” she said, “I picture an entire industry sector being drawn to this space.”

As of last month, SUNY Orange and its foundation said they had raised $6.4 million of the $9.2 million for their “Innovation Grand Street” project at the community college’s branch campus in the City of Newburgh.

They plan to use that funding to overhaul a former Masonic Lodge and a former American Legion hall on Grand Street and turn them into job-training centers. A former YMCA located between those two buildings would be renovated in a later project phase.

These are the funds SUNY Orange has raised or anticipates so far: