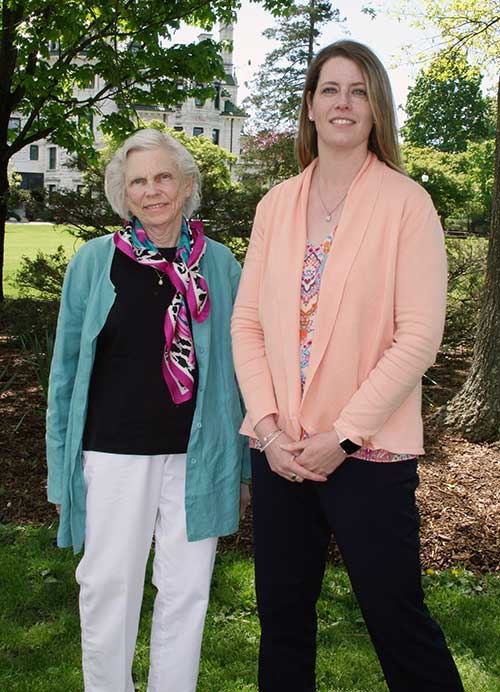 The Chancellor’s Award is the highest honor regularly bestowed upon community college personnel within the State University of New York. Sinsabaugh is the chairperson of the College’s Education Department while Szefc oversees a rich and diverse cultural program that hosts 80 to 100 events annually on both of the College’s campuses.

Sinsabaugh (at right in photo) and Szefc (at left) were presented with their awards during a SUNY Orange employee recognition ceremony on May 16 and were publicly celebrated during the College’s annual Commencement ceremony on May 23.

“Katie and Dorothy have personified excellence in their chosen fields,” said Dr. Kristine Young, SUNY Orange president. “Katie brings great care and creativity to her teaching that is preparing our education students to positively impact future generations of students at all levels, and Dorothy’s tireless passion for curating a rich and vibrant cultural program expands the horizons of our college community and fosters an appreciation of the arts within the greater community-at-large.”

As cultural affairs coordinator at SUNY Orange for the past 19 years, Szefc has organized and grown the College’s robust program of lectures, concerts, master classes, poetry and writing readings, stage and children’s theatre performances, films, and exhibits for two campuses. When she first started as a part-time coordinator in 2000, the Cultural Affairs program featured 21 events during the academic year. Szefc has since been elevated to full-time status and has grown the program to include a robust array of programs that attract more than 8,000 students, faculty, staff and community members annually. She continues to encourage the SUNY Orange community and the community-at-large to engage in the arts.

Szefc has served on the boards of directors/trustees of the Hudson Valley Philharmonic, the Orange Orchestral Society, and the Orange County Arts Council, chairing its Arts Awards Committee. Additionally, she was a member of the Executive Council of Music in the Mountains at SUNY New Paltz and the Contemporary Arts Alumni Advisory Board at Ramapo College, as well as the Orange County Citizens Foundation Exhibit Committee. She was the first female president of the Middletown Babe Ruth Baseball League and received the SUNY Orange Foundation Leadership in Education award in 2016. Szefc is a graduate of SUNY Orange who earned her bachelor’s degree from Ramapo College.