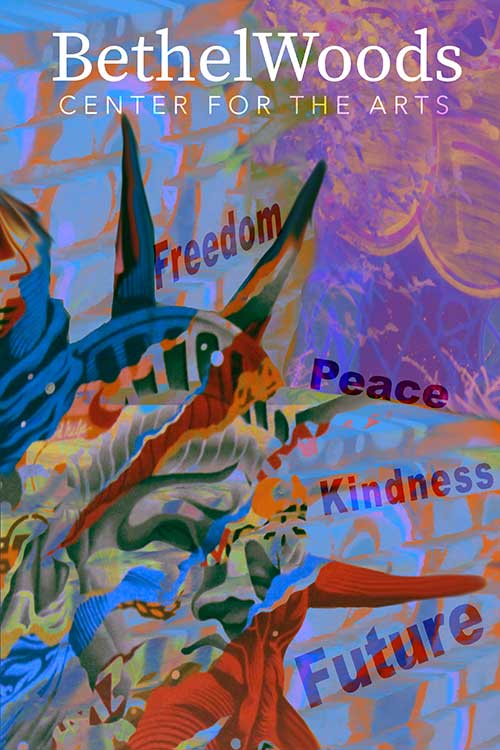 MIDDLETOWN, N.Y. – Elizabeth Guzman, a visual communications student at SUNY Orange, has won first prize in her age category in the Bethel Woods Center for the Arts’ “Peace, Love, and Posters” contest to commemorate the 50th anniversary of the famed Woodstock Music Festival.

A resident of Warwick, Guzman will be honored along with other winners during Bethel Woods’ P.L.A.Y. After Dark: Power of the Poster event at 6 p.m., Wednesday, June 5. Her poster will be on display during the event, which will include a presentation by legendary poster designers David Edward Byrd (who designed the first iteration of the Woodstock festival poster) along with Frank “Fraver” Verlizzo (who created The Lion King on Broadway design). The pair are also behind poster art for Sweeney Todd, Jimi Hendrix, and Harry Potter.

Bethel Woods received hundreds of entries from across the country, and the judging panel selected first prize and honorable mentions in the following age groupings: 15-18, 19-23 and 24-plus. A grand prize winner was also named. In addition to having her poster displayed during the June 5 event, Guzman received a $500 award,

Guzman’s design features a contemporary Statue of Liberty theme in red, blue, light gray and purple with the words “Freedom, Peace, Kindness and Future” prominently displayed. She entered the contest as part of a class assignment in her Visual Communications and Graphic Design 2 course taught by professor Joe Litow.