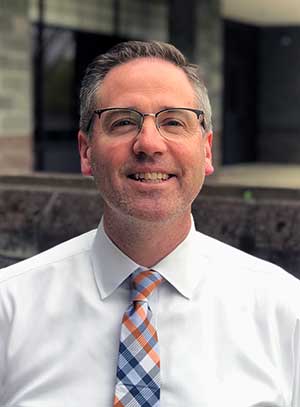 This story was written by Sal Interdonato and appeared in the July 17, 2019, edition of the Times Herald-Record

Tom Rickard’s recruiting pitch is much the same as it was during his first stint as SUNY Orange men’s basketball coach.

Orange is a place that Rickard believes in, he has told recruits since taking over the program again in April after what the coach calls “a six-year hiatus.”

Rickard played for his father, Paul, Orange’s iconic coach, as did his four brothers. All six of his siblings attended Orange. His father taught math for more than three decades at the two-year school. Rickard still teaches math part-time there.

“I still had that connection,” said Rickard, 46, who was 134-73 in seven seasons (2006-13) at Orange, succeeding his father. “The reason why I got out of coaching was to be home and help my wife out a little bit and be with the kids (four children now ages 3 to 9). They are a little bit older now. I got the itch back and then, when the opportunity arose, I jumped at it.”

One of Rickard’s first actions as head coach was a reunion with Jamaal Ennis, who served as his assistant for seven years. Next was hitting the recruiting trail and reconnecting with local high school coaches. Rickard is still working to finalize SUNY Orange’s roster.

Orange had added 6-foot-4 forward Jayden Nichols, one of Middletown’s leading scorers during the 2017-18 season, and 6-foot-8 forward Joel Carty of Uncommon Charter in Brooklyn to a roster that includes returning starters Josh Parker of Middletown, Chester’s Tanner McFarlane and Zayne Watson, whose father, Tom, played for Paul Rickard in the 1980s.

“He (Rickard) knows better than anybody what the position requires and the recruiting, the hours and our opponents,” SUNY Orange athletic director Wayne Smith said. “He was the perfect candidate.

“Coaching is in his blood. He missed it a little bit and he’s in a different chapter in his life than he was the first time around.”

“People would ask me if I wanted to get back into coaching,” Rickard said. “As a high school assistant principal, there’s a lot of things going on at night so coaching is tough. When I made the move to Minisink and this was an opportunity, I was grateful that Minisink was pretty supportive about it.”

“Orange holds a special place for me,” Rickard said.

He hopes his second venture extends longer than his first run. He would love to continue the Rickard family tradition at Orange. His sons Thomas and Nicholas are 9 and 7, respectively.

“My dad coached all of his sons, all five of them,” Rickard said. “Maybe I’ll get to coach my sons, too. You never know.”