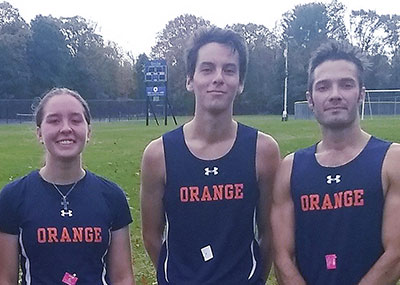 Ruckdeschel, of Middletown, was one of 38 women named to the Division III team but, more importantly, was among only 14 Division III women’s competitors nationally to achieve a perfect 4.0 grade point average (GPA) in the Fall. To be eligible for consideration, athletes were required to have attained at least a 3.4 GPA and be nominated by their head coach. During the season, Ruckdeschel finished 91st at the national championships and was second (behind teammate Michaela Frisbee) in the Mid-Hudson Conference title race.

Soto, of Warwick, posted a 3.73 grade point average last semester while St. Germain’s GPA was 3.41. Soto earned All-American status in the Fall by virtue of finishing 10th among more than 200 runners at the national championships. He was second in the Region XV race to earn all-region honors and also won the Mid-Hudson championship. St. Germain, of Wallkill, placed a respectable 86th at the national meet. In addition, he was fourth in the Mid-Hudson meet and ninth in the Region XV race.

The Colts are coached by Todd Derkacz.