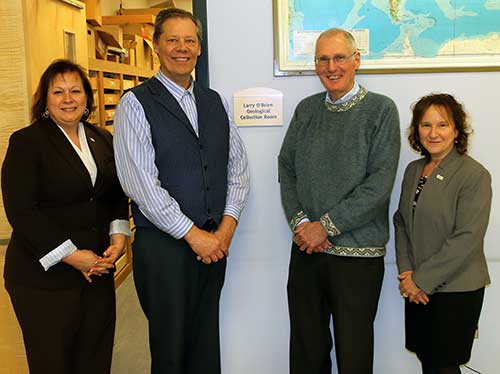 MIDDLETOWN, N.Y. – SUNY Orange recently dedicated the Larry O’Brien Geological Collection Room in honor of longtime former professor Larry O’Brien who taught geology and other science courses from 1973 until his retirement in May 2016.

During his 43 years as a faculty member, he taught and inspired thousands of students. In addition to his vast knowledge of geology, O’Brien was an avid world traveler and he often collected samples on his trips. He has visited all 50 states, 11 of the 13 Canadian provinces, 76 foreign countries and 50 of the 62 United States national parks.

When he retired, he donated to the College his mineral and rock collection, which numbers nearly 2,000 individual samples including rocks, minerals, fossils and volcanics. Some of the samples are considered rare, and the collection is supported by more than 2,000 geological and topographic maps and other documents he collected over the years. The College has approximated the collection’s value in excess of $300,000.

Last year, the College’s Board of Trustees unanimously passed a resolution naming Room 219 of Rowley Center of Science and Engineering on the Middletown campus as the Larry O’Brien Geological Collection Room.