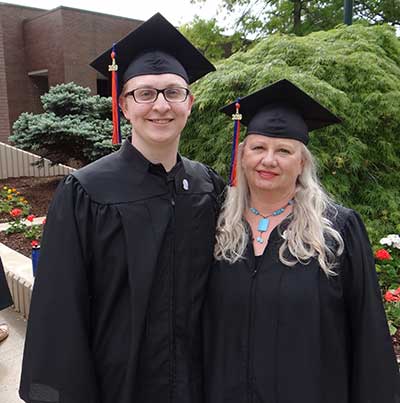 MIDDLETOWN, N.Y. – Graduate Stephanie Ann Carter (below right) spoke of the shared “community” that she and her fellow graduates have built at SUNY Orange, while also celebrating her classmates’ respective differences, as she addressed the Class of 2019 at the College’s 69th Commencement ceremony held Thursday evening (May 23) in the Edward A. Diana Physical Education Center in Middletown.

Carter, along with Education Department Chairperson Dr. Katherine Sinsabaugh, were the featured speakers as SUNY Orange feted an estimated 548 graduates, the most ever to attend Commencement. Thursday’s event marked the fourth successive ceremony in which more than 500 graduates attended, and set a new high for the third time in the past four years. In all, a record 923 students completed their degree requirements within the past academic year (pending certification of all May graduates’ transcripts), breaking last year’s all-time mark of 901. 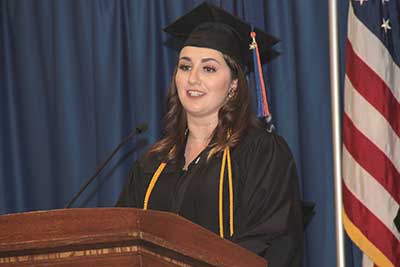 The threat of severe thunderstorms required a midday change of venue from outdoors on the Alumni Green to indoors in the Diana Physical Education Center. Nearly 2,000 friends and family members filled Schmid Gymnasium while another approximately 550 people watched a simulcast of the ceremony in one of seven on-campus locations. Additionally, 776 unique viewers from 208 cities—some as far away as Ireland, Italy, Jamaica, Mexico and Canada—tuned in during the event’s live online stream.

“When Bob Dylan said that ‘the times they are a changing,’ his was a statement that would come to resonate with every generation after. Indeed, we are generation experiencing profound changes in the way we communicate, contribute, and care. Changes in the way we live and love and learn,” Carter told her peers. “We are subject to profound world events and polarizing world leaders. We are sometimes struck by debilitating fear and uncertainty. But like all of history, this cycle of challenges is simply repeating itself, and like history, what sees us through these times is ‘community.’

“A community is defined as ‘a body of persons having common social, economic, and political interests or a common history,’” she added. “Now, we are wide and wonderfully varied group of students. Socially, we come from different lives, different places, and, in my case, different decades. My peers and my professors, this new community I had inherited, would become the springboard that would propel me to standing on this stage and telling my story. It would be their support, their wisdom and their contributions that would carry me through to the degree I receive today.” 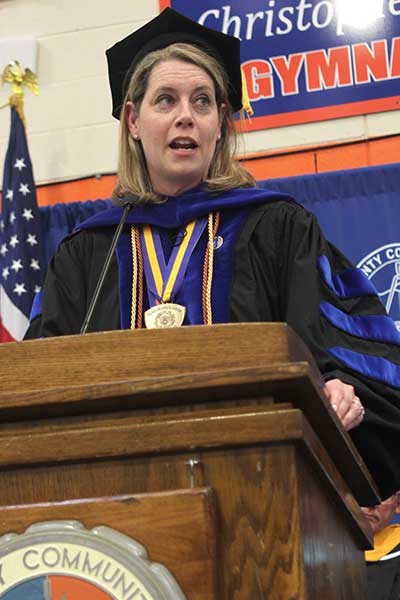 A lifelong educator who has taught elementary students and college students, Sinsabaugh (left) surveyed people of all ages—from folks in their 80s to children under the age of 10--to develop insights to share with the Class of 2019.

“My research has allowed me to come around to something that was told to me as a child and impacted my life tremendously. For me, it boils down to three words I hope you’ll remember … always be yourself,” Sinsabaugh said. “You were created to be you. Surround yourself with people who care for you and support you, and I think that will help you find even more success than you’ve already found.

Additional remarks were delivered by Fred Watson, chair of the SUNY Orange Board of Trustees; Orange County Deputy Executive Harry Porr; and Derrik Wynkoop, chair of the SUNY Orange Foundation Board of Directors. SUNY Orange President Dr. Kristine Young hosted the event, and during her remarks, she outlined how the Class of 2019 shared certain similar experiences with the College’s first graduating class in 1951, while also noting impact today’s graduates will have upon their communities.

“For as long as there have been students at Orange County Community College, there have been faculty and staff. And those faculty and staff have cared deeply about you. Nothing now will please us more than to watch you create that beneficial and fulfilling future,” Young said. “To discover and apply those constructive solutions envisaged as far back as 1951. To troll the ‘good old days’ for the ideas that still make sense and bring them forward into the environment we inhabit today as we simultaneously create that bright future. 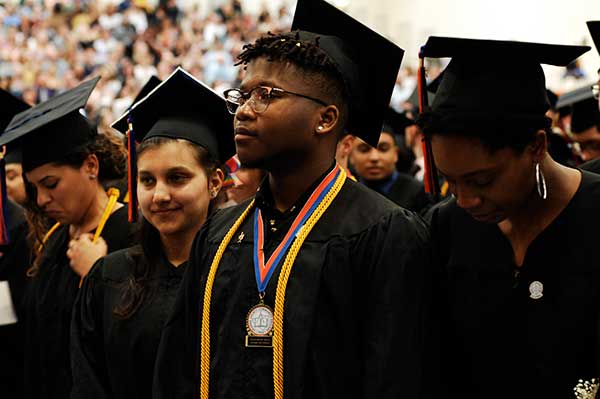 Each year, SUNY Orange awards diplomas to students who earn Associate in Arts, Associate in Science and Associate in Applied Science degrees, while presenting graduation certificates to those who complete the College’s various certificate programs.