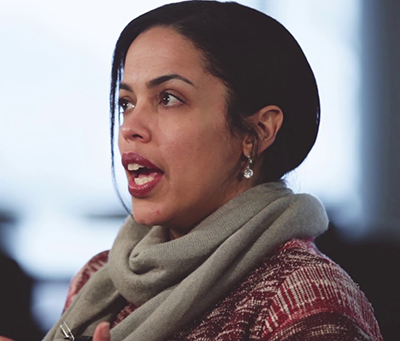 The Sojourner Truth Awards Program honors students from grades 6 through 12 who have excelled in areas such as athletics, citizenship, creative arts, diversity, English language arts, foreign languages, perseverance/effort, sciences, and technology. The program aims to promote education in a positive manner and to motivate students to consider college as a viable and attainable goal.

The evening’s keynote speaker is Inaudy Esposito, executive director of the Orange County Human Rights Commission and an advocate for targeted and oppressed communities. Born in the Dominican Republic, Esposito immigrated to the United States as a child, and has lived in the Hudson Valley since 2003. Her expertise is in social justice, diversity and inclusion, and gender violence issues, including intimate partner violence, sexual assault, and human trafficking.

She was an English as a Second Language (ESL) instructor at SUNY Orange for more than 10 years, and works tirelessly on eliminating oppression, racism, sexism, homophobia, and gender inequality in her community. She has served on numerous boards and committees, including the New York State Coalition Against Sexual Assault, the Orange County Coalition Against Domestic Violence, the Northeastern New York Coalition of Crime Victim Service Providers, and the Newburgh Ministries.

Esposito has been recognized as an Orange County Woman of Achievement, honored by the Orange County Democratic Women, earned a 2018 Orange County Rising Star award, and was named a New York State Latino Rising Star by the New York State Hispanic Coalition. She is a sought-after speaker, and has presented at numerous conferences, including the 2018 TEDxNewburgh, where she discussed diversity and privilege in her talk “Turning Differences into Strengths.”

During the awards ceremony, four sophomores will be presented with scholarships to attend SUNY Orange, given by the SUNY Orange Foundation. The evening’s program will also feature a presentation of colors by the Middletown High School Junior ROTC and entertainment by SUNY Orange student Darius Beckford.

Sojourner Truth, for whom the program is named, lived in the mid-Hudson Valley after escaping from slavery. She is hailed as one of the most distinguished and highly regarded women of the 19th Century. Born Isabella Bomefree (later spelled Baumfree) in about 1797 in Hurley, N.Y., Isabella was sold four times before she and her daughter were given their freedom in 1828. She spoke low Dutch until she was about 10 years old and never learned to read or write. In 1843 she changed her name to Sojourner Truth to reflect her chosen mission of traveling to show people their sins and telling them what is true. She is often cited as one of the most effective and powerful speech-makers of her time.

Corporate funding for the program and awards ceremony comes from presenting sponsor Orange & Rockland Utilities. To learn more about this program, visit SUNY Orange’s Sojourner Truth website at www.sunyorange.edu/stap or call the Office of Student Services at (845) 341-4000.