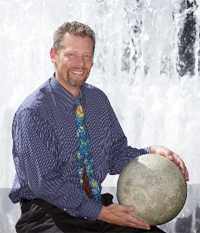 Timothy was born in the continental United States yet not in any state in the union. He spent much of his youth mired in mud and was generally considered an intellectual cripple. His formal mental development did not begin until college.

He attended Rutgers University, the State University of New Jersey, and graduated with High Honors in the spring of 1982. After a brief stint as an industrial analytical chemist/whipping boy at Spex Corporation in Metuchen, NJ, he decided it was time to continue his mental development. After two years as a bench chemist, he realized life as a BA chemist was dirty and hard. While he fondly remembered the times he spent as a youth encased in dirt and mud, he was unwilling to return there for long. Therefore, he returned to school to continue his exercise of the little gray cells. This time the school was Purdue, home of the Black and Golf Boilermakers.

Since Purdue is in West Lafayette, IN, he became a Hoosier. In his stint as a boilermaker, the football team did not win one game, but he did manage to see the Goodyear Blimp up close and personal. Well, maybe they did win one game, but did not win many more than that. He attended Purdue from 1984 to 1989. At which point, he felt he had grown intellectually enough to escape, so he wrote a thesis and absconded with a Ph.D. in Analytical Chemistry to New York and once again worked as analytical chemist.

This time he worked for one of the largest corporations in the world, IBM. After a few years as a mass spectroscopist specializing in Fourier Transform Mass Spectroscopy (FTMS), tandem mass spectroscopist EB design, FAB/MS, Thermospray/MS and Particle beam/MS, he managed to dodge the layoffs and quietly slipped out of the building (310 for those who know) and resurfaced in Middletown, NY at Orange County Community College. As far as is known, he is still there teaching chemistry, what else?

Cynthia came to Orange County Community College through a winding road. Cynthia started her career in 1981 at BOC. She went on to graduate school. Later, she worked at Texaco doing computational and analytical chemistry to solve many of Texaco's oil and fuel additive problems. After Texaco's dramatic down fall, she moved onto teaching high school Chemistry. Finally she decided that her real talent was still in teaching, but at a higher level.