What is the flu (aka influenza)?

The flu is a contagious respiratory illness caused by influenza viruses that infect the nose, throat, and lungs. It is not caused by cold weather or being outdoors in frigid temps without a hat. There is no correlation between cold weather and the flu. Flu season occurs throughout the country during the same months, whether we’re in the balmy South, the ice-cold North, or the bitter Mid-West. Each flu season has more to do with the natural life cycle of the virus, although scientists are not exactly sure how this works. Colder weather might increase the risk of flu in one way: We might come into closer contact with other people because we’re all stuck inside, and that could make it easier for the virus to spread.

In most cases the flu is short-lived (3-5 days) and, although discomforting and disruptive, most people make a full recovery. In some cases, though, the flu can be very serious, perhaps deadly, especially for the very young, the very old, and those with chronic illnesses that predispose them to such conditions as asthma, diabetes, heart disease, or immuno-suppressive conditions such as cancer. The flu is highly contagious and easily transmitted, which is why prevention is so important. The flu vaccine is the best way to prevent the flu.

How does it spread? 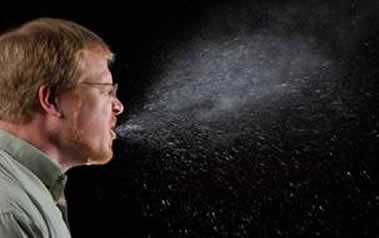 Most experts believe that flu viruses spread mainly by droplets made when people with flu cough, sneeze or talk. These droplets can land in the mouths or noses of people who are nearby. Less often, a person might also get flu by touching a surface or object that has flu virus on it and then touching their own mouth, eyes or possibly their nose.

How serious is it?

Complications of flu can include bacterial pneumonia, ear infections, sinus infections, dehydration, and worsening of chronic medical conditions, such as congestive heart failure, asthma, or diabetes.

And if you’re young and healthy, you still need to worry about getting the flu and should get the vaccine. Not only will it protect you from getting sick, it will also protect the babies, children, elderly, or ill contacts in your life. People with the weakest defenses, like children under 6 months, can’t get the flu vaccine. Their safety depends on everyone else getting immunized.

Flu is unpredictable and how severe it is can vary widely from one season to the next depending on many things, including:

What are the signs and symptoms?

People who have the flu often feel some or all of these signs and symptoms:

How is it treated?

The flu is caused by a virus, so antibiotics are not a cure.

Supportive care is the best medicine. This includes:

And don’t assume that because you’ve had the flu you can’t get it again. Flu infection can happen from more than one strain of virus, and you could get infected with one type and then the other.

The Best Way to Prevent Seasonal Flu: Get Vaccinated!

Who Should Be Vaccinated?

Everyone 6 months of age and older should get a flu vaccine every season. This recommendation has been in place since February 24, 2010 when CDC’s Advisory Committee on Immunization Practices (ACIP) voted for “universal” flu vaccination in the United States to expand protection against the flu to more people.

Vaccination to prevent influenza is particularly important for people who are at high risk of serious complications from influenza. See People at High Risk of Developing Flu-Related Complications for a full list of age and health factors that confer increased risk.

Contrary to popular myth, the flu vaccine does not cause the flu because it is made from dead virus which cannot infect you. FluMist, the nasal vaccine, is made of live virus but it’s engineered to remove the parts of the virus that make people sick. These days, the most common side effect of a flu vaccine is a sore arm, but in the past people may have had some minor effects which mimicked a mild case of flu, or they encountered a sick contact who gave them a cold or infection shortly after taking the flu shot. These people may have mistaken their symptoms as the flu caused by the vaccine which most likely was not the case.

When should I be vaccinated?

Yearly flu vaccination should begin soon after flu vaccine is available, and ideally by October. However, getting vaccinated even later can be protective, as long as flu viruses are circulating. While seasonal influenza outbreaks can happen as early as October, most of the time influenza activity peaks in January or later. Since it takes about two weeks after vaccination for antibodies to develop in the body that protect against influenza virus infection, it is best that people get vaccinated so they are protected before influenza begins spreading in their community.

For more about preventing the flu, see the following: