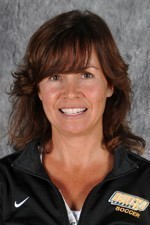 Lori Beesmer was a star women’s soccer player for the Colts who went on to enjoy a record-setting three-year career at SUNY Cortland. At SUNY Orange, she was instrumental in helping organize the women’s soccer team. In 1982, she and some classmates lobbied athletic director Jim Migli to create a women’s soccer team. During the team’s first year, Lori set a national junior college scoring record with 36 goals in 14 games while the Colts reached the semifinals of the national tournament. She also played women’s basketball and softball at SUNY Orange and won the Mary B. Diana Award as the College’s top female athlete. She was named to the Region XV all-star teams in both basketball and softball, in addition to a host of soccer accolades at the local, regional and national level. At Cortland, she was a two-time All-American, a two-time Northeast Regional “Player of the Year”, and the 1985 SUNY Athletic Conference “East Division Player of the Year.” She compiled 116 points, including 39 goals and 38 assists, and concluded her career ranked second on the career scoring list, a position she retains today. Additionally her 38 assists are still the school’s career record and her 17 assists in 1984 remain Cortland’s single-season record. In her three seasons, the Dragons posted 45 wins against just 10 losses and eight ties. The program advanced to the NCAA Division I soccer tournament three times, including reaching the quarterfinals twice. She later served in a coaching capacities at the high school and college levels. She was head coach at Cazenovia Central High School as well as an assistant at SUNY Oswego and the United States Military Academy.

Heather Canfield was a member of the Orange County Community College class of 1999 and a standout pitcher for the Colts’ softball team. During her freshman year, she was selected to the Mid-Hudson Conference and Region XV all-star teams, and was named a second team All-American as the Colts forged a 20-8 record. As good as her freshman year was, her sophomore year was even better. Heather posted a 16-1 record as a pitcher with a 1.38 earned run average over 97 innings, including a perfect game against Nassau. On the season, she struck out 122 batters. At the plate she hit .455 with 18 RBIs. The Colts compiled a sparkling record of 34-7 and won the Region XV championship. Canfield was named the 1999 Region XV “Player of the Year” and was a first team All-American while leading her team to a third-place finish at the NJCAA National Tournament. She went on to earn her bachelor’s degree from Mount St. Mary and a master’s degree from Long Island University. For the past 16 years, she has worked for Orange-Ulster BOCES as assistant interscholastic athletic director, where she collaborates with 46 school districts in Section IX.

A product of Wallkill High School, Michelle Diener graduated from SUNY Orange in 1991 and continued her education and playing career at Wagner College. Michelle was a two-sport standout for the Colts, excelling in basketball and softball. As a freshman forward on the hardwood, she led the Colts to a Region XV Championship and a berth in the NJCAA National Tournament. She was named to the Region XV first team, as well as the all-tournament team, during both her freshman and sophomore campaigns. A solid offensive player on the softball diamond, Michelle was selected as a Mid-Hudson Conference all-star following each of her two seasons. At Wagner, Michelle averaged 12 points and 7.9 rebounds as a junior in 1991-92 and 9.3 points and 6.7 rebounds as a senior in 1992-93. She grabbed a career-high 24 rebounds against Robert Morris during the 1992-93 campaign, posting the third-highest single-game rebound total in Wagner history. Only one player in the past 24 seasons has equaled that mark. Her four steals against St. Francis (Pa.) during the 1992 Northeast Conference Tournament tied a Wagner record for steals in an NEC tourney game. Michelle was named the Kingston Freeman’s 1989 Girl’s High School “Player of the Year.”

Anthony Evans played basketball for SUNY Orange during the 1989-90 and 1990-91 seasons. He was the team scoring leader in both campaigns and finished his career with 1,182 points. After graduating from St. Thomas Aquinas College, Anthony entered the coaching ranks. He served as an assistant at SUNY Orange and SUNY New Paltz before becoming the head coach at SUNY Ulster in 1999. From there, Anthony accepted an assistant coaching position at SUNY Delhi before moving to Norfolk State as head coach from 2007-2013. In 2013, he was named the head coach at Florida International University, where he still coaches today. Anthony’s 10-year head coaching record stands at 150-170. His record at Norfolk State was 99-91, but included a remarkable run of 47 wins against just 22 losses during the 2011-12 and 2012-13 campaigns. In 2011-12, he led the Spartans to the school’s first-ever Mid-Eastern Athletic Conference championship, an overall record of 26-10 and a berth in the NCAA Tournament. The Spartans became just the fifth No. 15 seed to advance in the first round when they upset Missouri 88-86. The next season, Norfolk State was 21-12, with a perfect 16-0 record in MEAC play before earning a bid to the National Invitation Tournament. He was named MEAC “Coach of the Year” in 2013. During his two seasons at SUNY Ulster, he guided the Senators to a record of 23-8 and was named Region XV “Coach of the Year” in 2000.

Laura Gabella graduated from SUNY Orange in 2002. She was a two-year tennis standout, playing both singles and doubles. She went 6-0 and 6-1 during her freshman year at #3 singles and #2 doubles, respectively. Laura posted marks of 6-2 and 7-0 during her sophomore year while playing at #1 singles and #1 doubles. In 2001, she was named First Team All-Region XV and helped lead the Colts to the NJCAA National Tournament where she was a finalist at #3 singles and paired with Catherine Brignoni to win the national championship at #2 doubles. Gabella and Brignoni lost just five games in three matches en route to the championship, which included a 6-2, 6-1 victory over Mercer County’s Sarah Bucon and Ashley Clarke. In 2002, Laura was again named to the All-Region first team, and won championships at both #1 singles and #1 doubles at the NJCAA National Tournament in Arizona. The Colts finished third in the team standings at the 2002 national tourney. Laura, the top seed, defeated Fashion Institute’s Kimberly Guida 7-5, 6-3 in the championship singles match, while she and Melissa Conley outlasted Guida and Jessalin Fiore-Sylvester in three sets for the doubles crown. A team leader, Laura transferred to Pace University, where she played both #1 singles and doubles for the Setters. She assisted as a volunteer coach at SUNY Orange after her college playing career. She is a certified instructor by the United States Professional Tennis Association, having instructed both juniors and adults. She also served as a tennis coach at Goshen High School. Laura was the 2008 USTA National Grass Court Championship’s Bronze Ball (3rd Place) and has played on several USTA teams including women’s and mixed doubles.

A Pine Bush High School graduate and lifelong resident of Orange County, George Shurter ran cross country at SUNY Orange during the 1972 and 73 seasons. He led the team to back-to-back Region XV championships and was twice named to the All-Region team. He won 10 meets in 1973, including the Mid-Hudson Conference Championship race at Middletown’s Watts Park. George covered the four-mile course in 20:31, leading a SUNY Orange sweep of the top four places. George helped the team finish 24th and 20th at the NJCAA National meet in 1972 and 1973, respectively. As a senior at Pine Bush in 1971, George won the Section IX Class C boys’ cross country meet in 13:03. Still actively involved in the local running scene, George is Vice President of the Orange County Runners Club and has coached the girls’ cross country team at Middletown High School for the past 11 years. He also serves as one of the race directors for the Classic 10K race in Middletown. He has also directed other races in the area and remains a runner today.