Seeking to expand students’ horizons, bring academic departments together in collaboration and infuse a global perspective on its curriculum, SUNY Orange has planned a year-long focus on Latin American culture, heritage, geography, art, music, language and much more as part of its first Global Initiative. 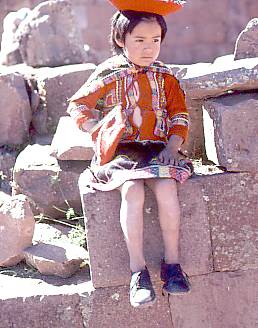 Rooted in the College’s international studies program, this debut Global Initiative project is drawing participation from all corners of the campus community, but it is hoped that as the Initiative gains attention, it appeals to local businesses, civic leaders and community members as well.

“This Global Initiative will recognize the contributions Hispanics have made to areas such as American art, culture and economics. It will also bring Hispanic Americans to the College, thus expanding the community base of the College and helping to strengthen our ‘American culture’ by informing Hispanics and non Hispanics about these contributions,” explains Max Schaefer, SUNY Orange professor who coordinates the College’s theater productions.

A number of the College’s academic departments have incorporated Latin American-based courses into their programs. Additionally, a pair of international trips to Peru and Mexico is planned; Latino lecturers have been invited to speak to both students and county residents; an immigration and migrant work symposium is scheduled; and concerts, art exhibits and plays by Latino artists will be performed by the College’s Arts and Communication Department. Many other events are being planned and will be announced as they are scheduled.

Among the many faculty members who have embraced this Global Initiative are Schaefer, Kathleen Wright, Dr. Jean Carlos Cowan, Dr. Barry Kass and Dr. Demos Kontos. Wright, Kass and Kontos will spearhead the College-sponsored trips to Peru and Mexico while Cowan has organized the immigration and migrant work symposium. Schaefer, who will oversee production of a play by Latino playwright Carlos Morton in November, has joined with many of his Arts and Communication department colleagues to feature Latin American artists in their performances, plays and concerts.

“We really had two goals when we first began discussing this Global Initiative,” says Paul Basinski, coordinator of the College’s international studies program and chair of the Global Initiative team. “We are hoping we can create something meaningful here. It is a project that is collaborative, it is educational and it is intended to be inspirational, too. We want to talk about Latin American history, politics, heritage, culture, in all dimensions, the light side, the dark side, because we feel that is part of our ultimate educational mission here.

“The other part of it is to reach out into the Latino community, and we’ve begun to do that as well. We really want to get a sense of who our Hispanic constituency is, and ways in which we can involve those people who aren’t part of our academic community, both in terms of attending the events, or helping us to set up, participate or sponsor them,” Basinski adds. “That is part of the collaborative piece as well. We think this is a way to present the best side of SUNY Orange to a very large and growing segment of our potential college population.”

Basinski has already seen the on-campus collaboration hit its full stride as a diverse grouping of departments have banded together to create a year-long educational focus that ultimately benefits the students.

Dr. Catherine Chew, SUNY Orange’s vice president for academic affairs, says it is imperative that today’s educational programs stress cultural diversity. “You can’t underestimate the importance of helping students gain a better cultural understanding, given the world we are living in today. This is our first attempt at making sure our graduates leave us having been exposed to what a multi-cultural world means to their work, their existence, and the impact it has on each and every one of us.”

There is a sense among faculty members that this Global Initiative is not just about Latin America and the focus on learning, academics and culture, but that it will help internationalize the curriculum on campus.

“As an anthropologist, I believe that the Latin American Global Initiative is one of the most exciting educational events to be held at the College in the last several years. In our increasingly diverse and complex society, it is vital to a liberal arts education to become knowledgeable about worldwide, national and regional trends and developments which affect all of our lives,” Kass says. “Through the migration to the United States of millions of Hispanics, this country has important historical and current connections throughout the vast region known as Latin America.

“The Hispanic population of the United States is as important to the formation of this country as any of the other many immigrant groups who have entered our borders. The Global Initiative is SUNY Orange’s recognition of the vitality of the Hispanic people and their central place in the development of our nation,” Kass adds.

When the Global Initiative’s focus moves on to another region in the future, whether it is Africa or China or some other locale, Basinski expects the Latin American theme to remain. “I see no reason why once those courses and events have been established, that they couldn’t continue to be taught and utilized as academic tools as part of our curriculum in the future. That would be one of the real legacies regarding the impact that Global Initiative could have on the curriculum in international education.”

An even greater legacy of the Global Initiative will be the lasting impact it will have on SUNY Orange students, as well as faculty, staff and Hudson Valley residents. 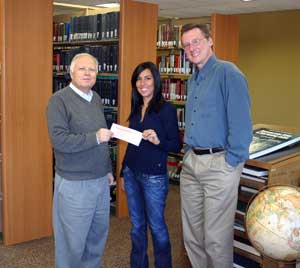 PHOTO at left: Talita Thomaz (center), a second-year Liberal Arts student at SUNY Orange, accepts a $500 Educational Foundation Travel Scholarship check that will enable her to join the College’s scheduled trip to Egypt this March. Thomaz, a graduate of Newburgh Free Academy who now lives in New Windsor, hopes to become an art teacher. She plans to transfer to New Paltz this summer after earning her associate’s degree from SUNY Orange in May. Presenting the check are Dr. Demos Kontos, left, SUNY Orange professor and coordinator of the Egypt trip, along with Paul Basinski, chair of the College’s Global Studies department. The Egypt trip is planned from Mar. 22-31 and will include visits to the Pyramids, Cairo and Tut’s Tomb, along with a cruise of the Nile and other cultural activities. 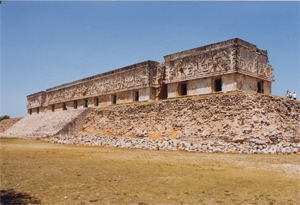 The Yucatan: "Voices of Mexico"

In conjunction with the Global Initiative: Latin America, SUNY Orange offered a wonderfully entertaining and enriching visit to the Yucatan Peninsula in Mexico during Spring Break 2008 (March 22-March 29).

The Yucatan remains one of the most beautiful and mysterious parts of Mexico, lush with history, culture, architecture and wildlife. This trip isled by SUNY Orange Professor, and Fulbright Scholar, Kathleen Wright, who has traveled to Mexico many times.

Highlights of the trip included trips to the historic ruins of Chitchen Itza, Tulum, and Uxmal; a visit to the ancient Mayan underground water site, the Ikkil Cenote.

The past comes to the present with stops at the cities of Merida and Vallodolid, where you will shop the native markets, and tour the European architecture and Cathedrals--a witness to the Spanish influence on Mexico. During play time, you will explore the seaside resorts of Progreso and Playa del Carmen, with their white beaches and super blue ocean.