Acanthodians are a group of fossil fish known from the Lower Silurian through their extinction in the Permian.  Some classify acanthodians with the bony fish (Osteichthyes, described next) while others classify them as a separate class of fish.  If they are a separate class, acanthodians and placoderms would be the only completely extinct vertebrate classes.  Their body shape is similar to that of sharks while their scales and the presence of bone make them more similar to bony fish (Qu, 2010).

Most acanthodians were small fish although some reached more than 2 m in length.  Early acanthodians were shark-like with sharklike scales and early sharks seem to have had spines on all their fins (Turner, 2004). They have notable differences from other bony fish, especially their teeth and their fin spines.  Some lost their teeth altogether.  Their scales and tails are similar to those sharks.  Early bony fish also share this type of shark-like tail.  The advanced characteristics shared by acanthodians and higher vertebrates include dermal bone in the skull reduced to small bony plates, a hyoid bone, and the mandibular bone in the lower jaw (Carroll, 1988). One of their most obvious features was prominent spines at the bases of their pectoral fins, pelvic fins, dorsal fins, and anal fins. Their teeth and scales were also distinctive. While some possessed teeth which allowed a predatory lifestyle, others lacked teeth and were filter feeders whose gill rakers were modified for this lifestyle. The multiple rows of scales corresponding to each vertebral segment of the body were similar to the condition of sharks, placoderms, and early ray-finned fish and unlike the known groups of jawless fish. Acanthodians possessed three semicircular canals and otoliths. Although the earliest forms were all marine, the latest species were exclusively freshwater. Many had large spines and heavy dermal armor in their shoulder girdles while others reduced their shoulder armor (Long, 1995). 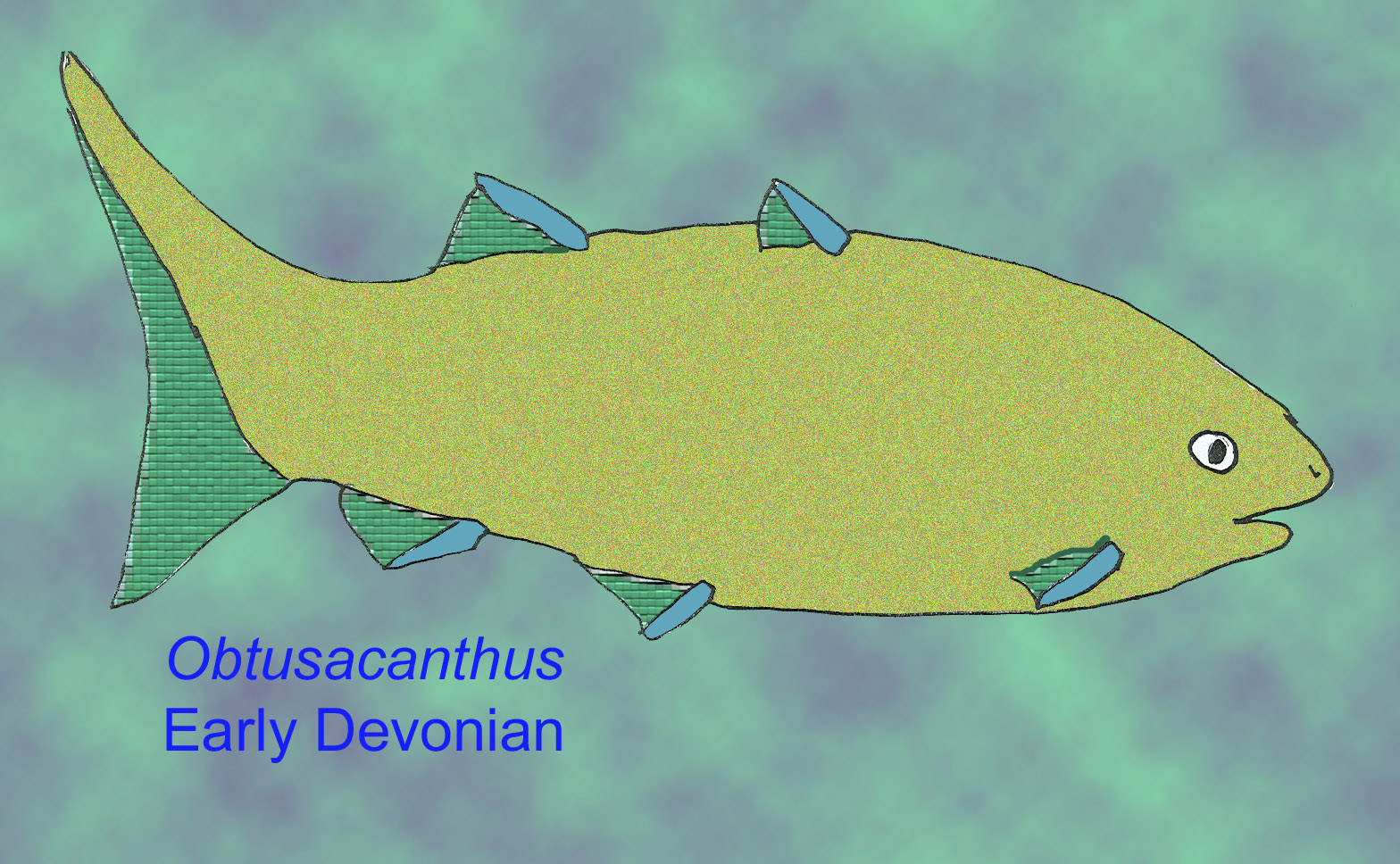 Lower Devonian acanthodians include fossils with cartilaginous versions of structures which are ossified in at least some advanced acanthodians (although some elements seem to be calcified such as the scapulocoracoid), lack teeth, have sharklike scales, and seem to be very close to the ancestral condition for acanthodians (Hanke, 2004). A group of acanthothoracid placoderms seems to be the most basal group (Goujet, 2004). Acanthodians are divided into three orders (Gagnier, 1995).

One acanthodian, Brochoadmones, is rather atypical in its sharply tapering snout and the only paired prepelvic finlets known in any fish (Hanke, 2006).

A number of acanthodians possessed tooth whorls which are thought to be primitive features retained from their common ancestor with sharks. Some acanthodians did not convert their cartilaginous endoskeleton to bone which is considered to be a primitive feature (Hanke, 2006). Most acanthodians possessed spines immediately in front of all fins (except the caudal fin) and these spines were similar to those which some sharks possessed preceding their dorsal fins. Some acanthodians lacked some of these spines. The pectoral and pelvic fins of acanthodians resembled those of ray-finned bony fish and, to a lesser extent, cartilaginous fish. The pectoral girdle included scapulocoracoid, procoracoid, and suprascapular bones (Coates, 2003).

More work will be needed to clarify the relative positions of shark and acanthodian lineages in early gnathostome evolution (Turner, 2004).