1) THE ARCHEOZOIC EON OF THE PRECAMBRIAN

In the rock strata of Isua, Greenland, there are "fossils" of small organic material which are 3.8 billion years old. Although there is organic matter inside them and there are examples of them splitting (budding in the way that yeast do), it is not clear whether they are living cells or nonliving microspheres (Pflug, 1979; Roedder, 1981; Bridgwater, 1981; Dunlop, 1978). 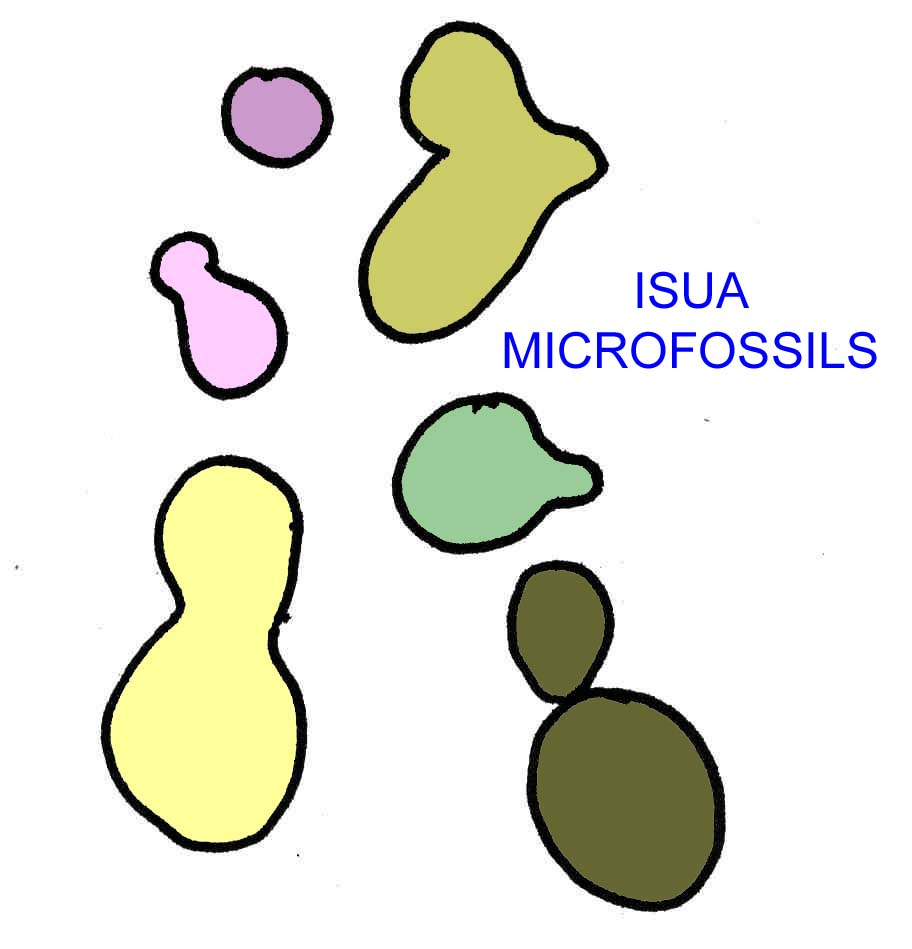 There have been "nanofossils" found on Martian rocks which contain organic material. Some feel that these tiny structures have were formed by primitive organisms on Mars (although many disagree with this interpretation) (Trevors, 2003b). The biomineralization of ancient microbes which resulted in the formation of microfossils often is the result of the incorporation of metal ions on the cell surface. "Nanobacteria" may be portions of microbes which were mineralized such as stalks and vesicles (Southam, 1999). Nanobacteria, which range in size from 0.1 to 0.5 microns and replicate every one to three days, are implicated in some diseases such as polycystic kidney disease in humans (Ciftcioglu, 2002).

Very small carbonaceous microstructures are known in 3.8 billion year old rocks in Isua which are probably abiotic. The oldest microfossils from Australia are 3.5 billion years old (Pflug, 2001; McClendon, 1999). Microstructures in meteorites resemble microfossils of primitive microbes. Chemical analysis of the size of organic structures and mass spectra of positive ions from meteorites can be similar to the analyses of rock strata containing Precambrian microfossils. The Murchison meteorite possessed small structures surrounded by a bilayer lipid membrane. These small structures can be in the form of helical and spherical carbon microstructures between 10 nm and 1 micron and filaments composed of units which are 2-20 nm wide and 1-2 nm long. How should these small organic structures be interpreted? Although some feel they were either alive or the precursors of life, at the very least they demonstrate that organic microstructures with some resemblance to fossils of cells can form in abiotic conditions on earth and in space (Pflug, 2001).

Given that bacteria can be found deep within the ocean, underground, and even within rock, these environments must be considered when pondering the origin of life. Bacteria can exist within the channels of certain rock minerals, such as feldspar (Smith, 1999).There are an estimated 4-6 x 10 30 prokaryotic cells on earth whose total carbon mass represents about as much as the total carbon mass of plants on earth (350-550 Pg; 1 Pg = 10 12 kg). Although the exact values are unknown, there seem to be an enormous number of prokaryotes deep in the soil and under the ocean floor. Deep aquifers and the water associated with petroleum can contain between a thousand and a million microbes per milliliter. Underground, more than 400,000 microbes/cubic centimeter are found at depths of 2000 meters and more than 300,000 microbes/cubic centimeter are found at depths of 3000 meters (Whitman, 1998). Enormous quantities of microbes live in the rock underneath the ocean floor. Microbes have been found more than 1.6 km under the seafloor in sediments which are more than 100 million years old. Some of these microbes were metabolically active and dividing. Among these are archea which survive on the anaerobic oxidation of methane. Some have suggested that 2/3 of earth’s prokaryotes live in sub-seafloor rocks (Roussel, 2008). Many of the most primitive modern bacteria inhabit deep sea hydrothermal vents. Prehistoric hydrothermal vents are known from the fossil record including Precambrian vents associated with a diverse bacterial fauna (Li, 2006; Campbell, 2006). 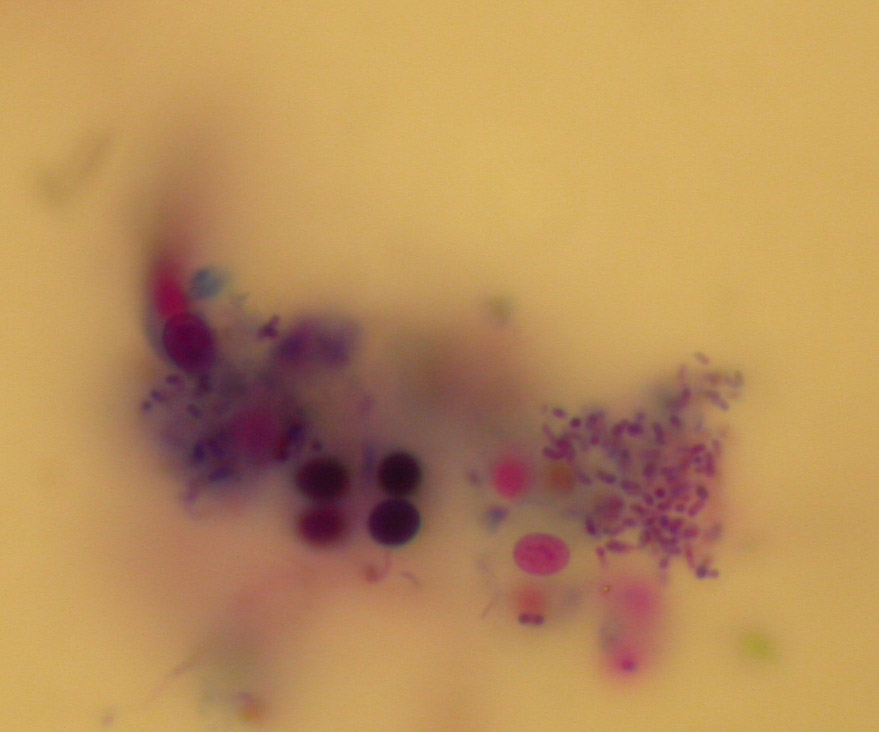 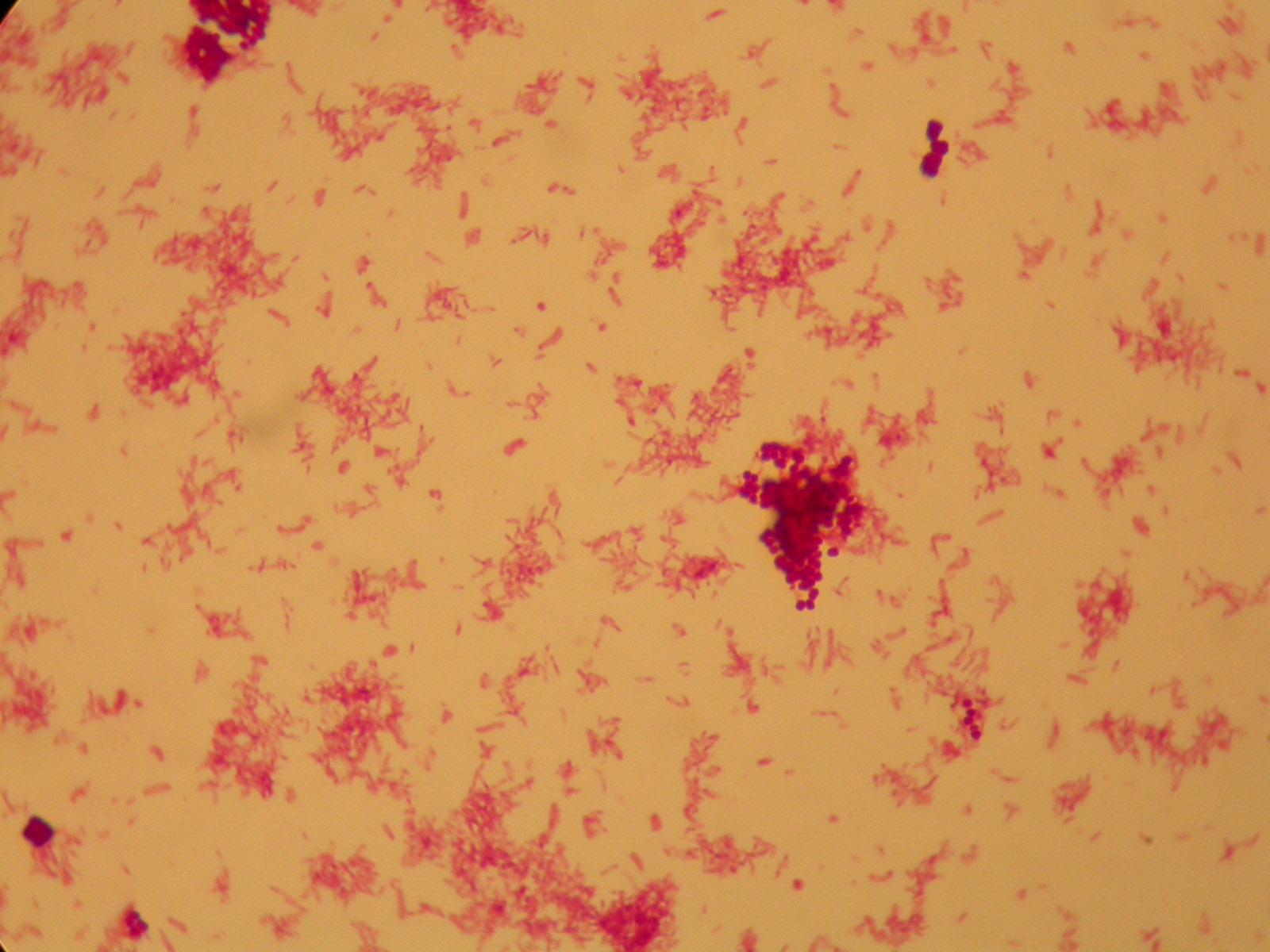 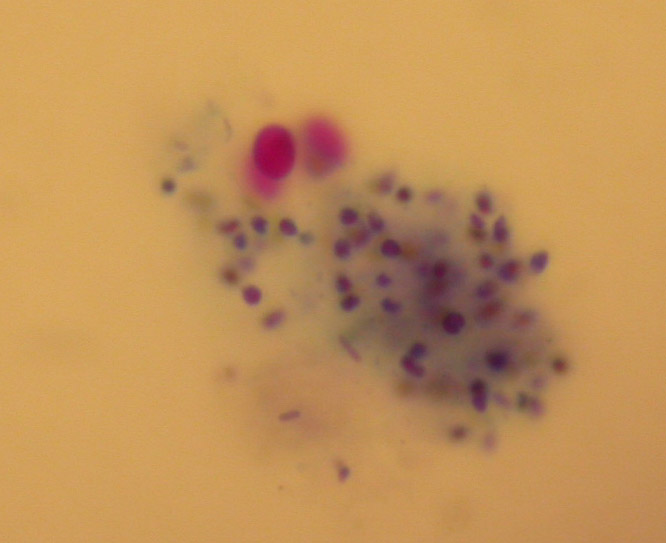 There are two different types of cells on earth today. Prokaryotic cells are represented by modern bacteria and are the simplest type of cell. Prokaryotic cells are small (typically 10,000 times smaller than eukaryotic cells) and lack membrane-bound internal compartments called organelles. There are 2 major divisions of modern bacteria: the eubacteria and the archebacteria (or archaea). The eubacteria make up most of the bacteria humans commonly encounter while the archaea inhabit many of earth's harshest environments. In recent years there is a great developing interest in the archaea because of similarities between them and the more complex eukaryotic cells (such as those which make up the human body).

The first fossils of prokaryotic (bacterial) cells are known from 3.5 and 3.4 billion years ago. These bacteria were photosynthetic (although non-oxygen producing) so it is likely that simpler non-photosynthetic bacteria evolved prior to this (Schopf, 1987; Beukes, 2004). Prehistoric photosynthetic bacteria formed large mounds called stromatolites which could reach 30 ft in height. Today, bacterial stromatolites exist in Australia and the fossil record shows that they were once much more common worldwide. Stromatolites are even known from the Archaeozoic Eon from 3 continents, including some which are 3.5 billion years old. Younger stromatolites contain bacterial fossils were produced by bacteria (Lowe, 1980; Walter, 1980). Older stromatolites were also probably formed by bacteria (their microscopic structure, their subtidal position, their similarity to biotic fossil stromatolites indicates this) but it is possible that some formed have abiotically (without bacteria as a result of geologic forces) (Grotzinger, 1996). A Precambrian stromatolite is pictured below. 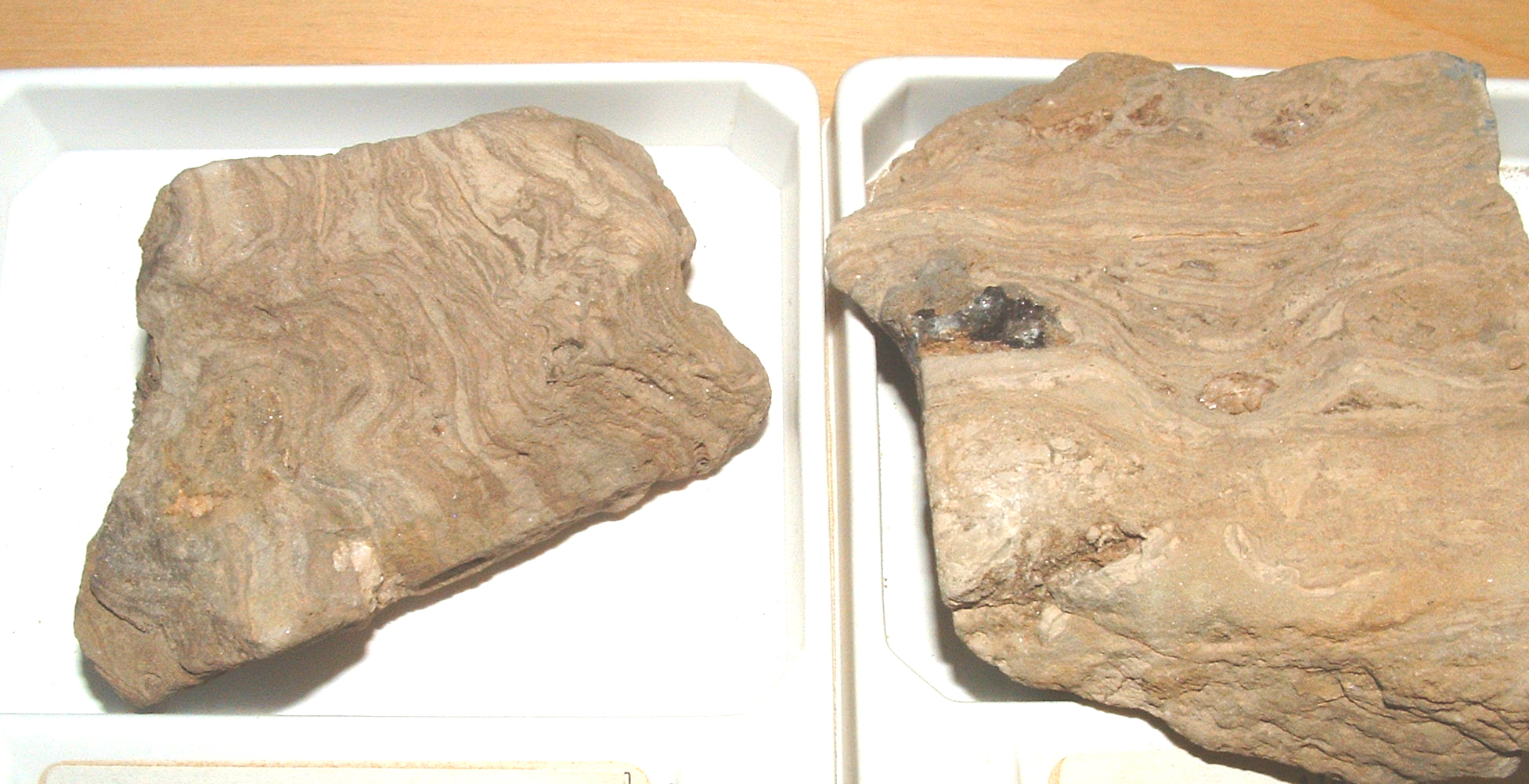 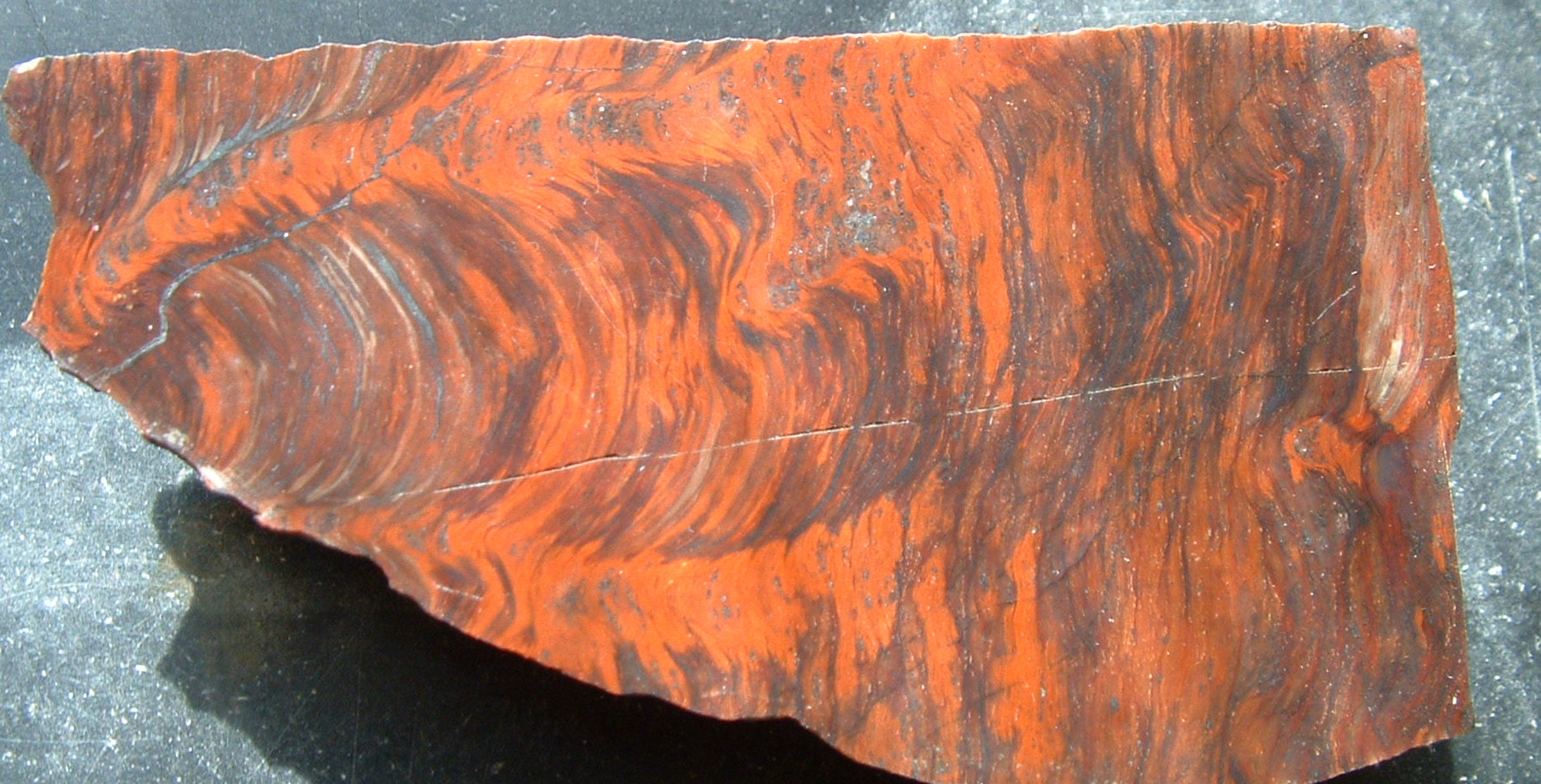 Geochemical evidence indicates that methane-producing bacteria were present on earth 3.46 billion years ago. The methane they produced could have played an important role in warming the planet (given that methane is a potent greenhouse gas) at a time when the sun would have produced energy (Ueno, 2006). Hydrocarbons dating from the Late Archeozoic indicate that both bacteria and archaea contributed to the early biosphere. The methane produced by archaea is likely to have contributed to the greenhouse gases which kept water liquid while the young sun’s output of energy was less than its modern amount ( Ventura, 2007).

Bacteria are the only known inhabitants of earth for at least the first 1.5 billion years in the history of life. Genetic comparisons suggest that the oldest, most primitive bacterial lineages were anaerobic and the ability to survive in the presence of oxygen evolved separately in different lineages. Photosynthesis seems to be an ancient process, present in half of the major eubacterial lineages (including a number in which photosynthetic ancestors seem to have given rise to nonphotosynthetic descendants (Fox, 1980). Hydrothermal vents are known to have supported microbial communities in the Precambrian ( Campbell, 2006). Many of the most primitive modern bacteria inhabit deep sea hydrothermal vents. Prehistoric hydrothermal vents are known from the fossil record including Precambrian vents associated with a diverse bacterial fauna (Li, 2006; 2007).

Seawater contains an average of more than 100,000 microbes per milliliter and for an estimated total of 3.6 x 10E29 microbes in the ocean. This mass of microbes (including bacteria, archaea, protists, and fungi) composes most of the ocean’s biomass, an estimated 3 x 10 E17 g. The diversity of these microbes is proving to be far greater than previously estimated (Sogin, 2006).

OXYGEN IN THE ATMOSPHERE

The earliest atmosphere did not have much oxygen gas.Before photosynthesis, so much oxygen would have been absorbed by reduced geothermal outputs and by weathering rocks that very little would have been present in the atmosphere. The only source of oxygen gas would have been the dissociation of water molecules by sunlight (Des Marais, 2000). This is evident in observing the sediments formed at that time metals didn't rust and minerals which form in the presence of oxygen are absent. Iron deposits of the Archaeozoic indicative of anoxic environment (Lascelles, 2007). By 2.1 billion years ago there was enough oxygen in the atmosphere to rust iron for the first time and by about 1.8 billion years ago oxygen was oxidizing significant amounts of iron. Other signs of oxygen also appear about this time such as sterane biomarkers from 1.7 billion years ago and oxidized sulfur deposits from about 1.6 billion years ago. Atmospheric oxygen levels increase towards the end of the Precambrian, just prior to the diversification of the Ediacaran fauna (Kaufman, 2007;Canfield, 2007).

Since the first bacteria would have probably lacked enzymes (such as peroxidase) which deal with destructively reactive forms of oxygen, oxygen would have represented the first air pollution and would have caused many extinctions among bacteria. There are still many bacteria today that cannot live in the presence of oxygen.

The fossil record of photosynthetic microorganisms is fairly good; that of cyanobacteria is robust from around 2.5 billion years ago through to the Cambrian Period. The organic molecules left in rocks support the fossil chronology. (For example, 2-methyl bacteriohopanepolyols are only known from cyanobacteria and its presence in rocks indicates that cyanobacteria were present when the rock was formed.) (Marais, 1992; Logan, 1999; de Duve, 1996)