Several Precambrian animals of the Ediacaran fauna are thought to be either early arthropods or relatives of the first arthropods. There are 2 Early Cambrian animals which seem to be related to the first arthropods but belong to a group which is now extinct. Anomalocaris (which could reach over 11 cm) and Peytoia (which could be more than 2 m in length) were not arthropods, although they possessed a number of arthropod characterisitics such as a tough exoskeleton, molting, segmentation, their type of gill, and pivot joints in their appendages. These predators probably fed on trilobites (some trilobites have been found with wounds which are thought to have come from them).

In the early Cambrian, a number of basal arthropods are known such as Shankouia zhenghei, Fuxianhuia protensa, and Chengjiangocaris longiformis. It appears the arthropods first evolved segmented limbs and then began to develop a hard exoskeleton. In basal arthropods, the head was limited to those segments which bore the eyes and short, stout antennae. They are arthropods but not members of the crown group Euarthropoda, because they lack segments with post-oral limbs composing the head, the head is not covered by a shield fused to its segments (but rather a shield-like structure which is mot fused), and their limbs lack euarthropod modifications. They do possess euarthropod features which are absent in the arthropod relatives such as modern onychophorans and tardigrades and Cambrian tardipolypods. These features include compound eyes, a hard exoskeleton, segmented antennae, the possession of a shield-like protection of the head, segmented limbs, and other features (Waloszek, 2005). Fuxianhuia and Canadaspis are very close to the ancestral arthropod stem. They possess a body and legs organized into segments but lack the fusion of the head segments found in true arthropods (Maas, 2001).

The Early Cambrian arthropod Fuxianhuia has been classified both as an arthropod and as a wormlike organism more primitive than the true arthropods. It now appears that it is a basal arthropod with the primitive feature of separate head segments including a separate eye-bearing segment. The embryonic development of modern arthropods suggests that the arthropod head evolved from separate segments which fused together (Chen, 1995; Waloszchek, 2005) 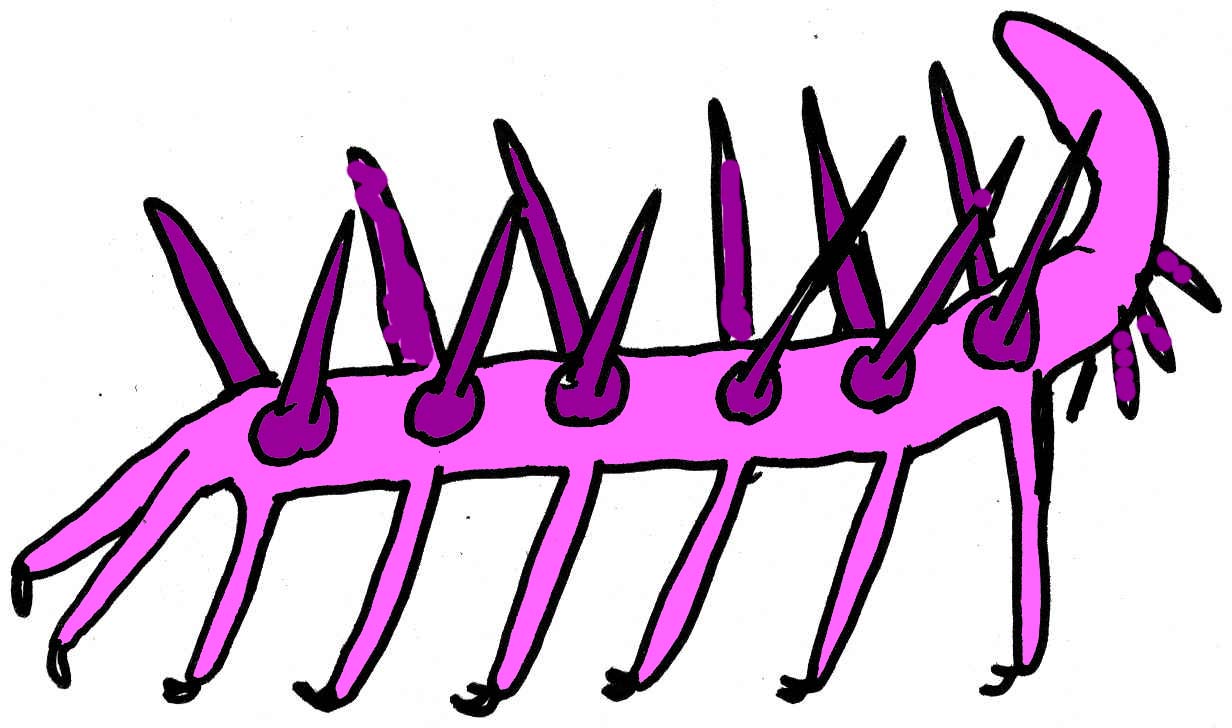 A number of Cambrian groups seem to be related to arthropods, such as the pentastomids (tongue worms), onychophorans, tardigrades (water bears), and lobopodians (the latter is known only from the Cambrian) (Maas, 2001). The Xenusiana oR Lobopods, onychophore-like organisms, were first identified in the Burgess Shale with fossils of Aysheaia. Hallucigenia is also known from the Burgess Shale, from the Middle Cambrian of North America. Other known fossil genera include Luolishania, Cardioductyon, Hallucigenia, Microdictyon, Onychodictyon, Paucipodia (all from the Lower Cambrian of China), Xenusion (from the Lower Cambrian of Europe), and Hadranax (from the Lower Cambrian of Greenland). They share a segmented body plan, soft skin, and a common lobopod appendage with strong claws (one or two claws per appendage). The number of paired appendages varied from 9 in Paucipodia to 25 in Cardiodictyon (Bergstrom, 2001; Hou, 1995). One Middle Cambrian lobopod possessed three pairs of limbs (in addition to the stubs of a fourth pair) (Budd, 2001).

The brain of onychophorans is similar to that of invertebrates such as nematodes and priapulid worms (Budd, 2001). Fossil evidence and comparisons between arthropods and onychophorans suggest that the ancestral arthropod eyes were simple ocellus-like structures (Mayer, 2006).

Tardipolypodans lacked jaws and either preyed on microscopic organisms or were scavengers (Ivantsov, 2005).

Kerygmachela has a mix of both onchophoran and arthropod characteristics (Akam, 2000).

Lobopods are considered to be a sister group to arthropods. The lobopod Miraluoishania possessed features associated with arthropods such as paired eyes, antennae, and features of the arthropod head while other features such as its wormlike body and nonsegmented limbs are more primitive. The similarity of its antennae to those of true arthropods suggests that it is a transitional form in arthropod evolution. Megadictyon, with its segmentation and the possibility of a hard outer surface, also seems to be a transitional form between lobopods and arthropods (Liu, 2008). 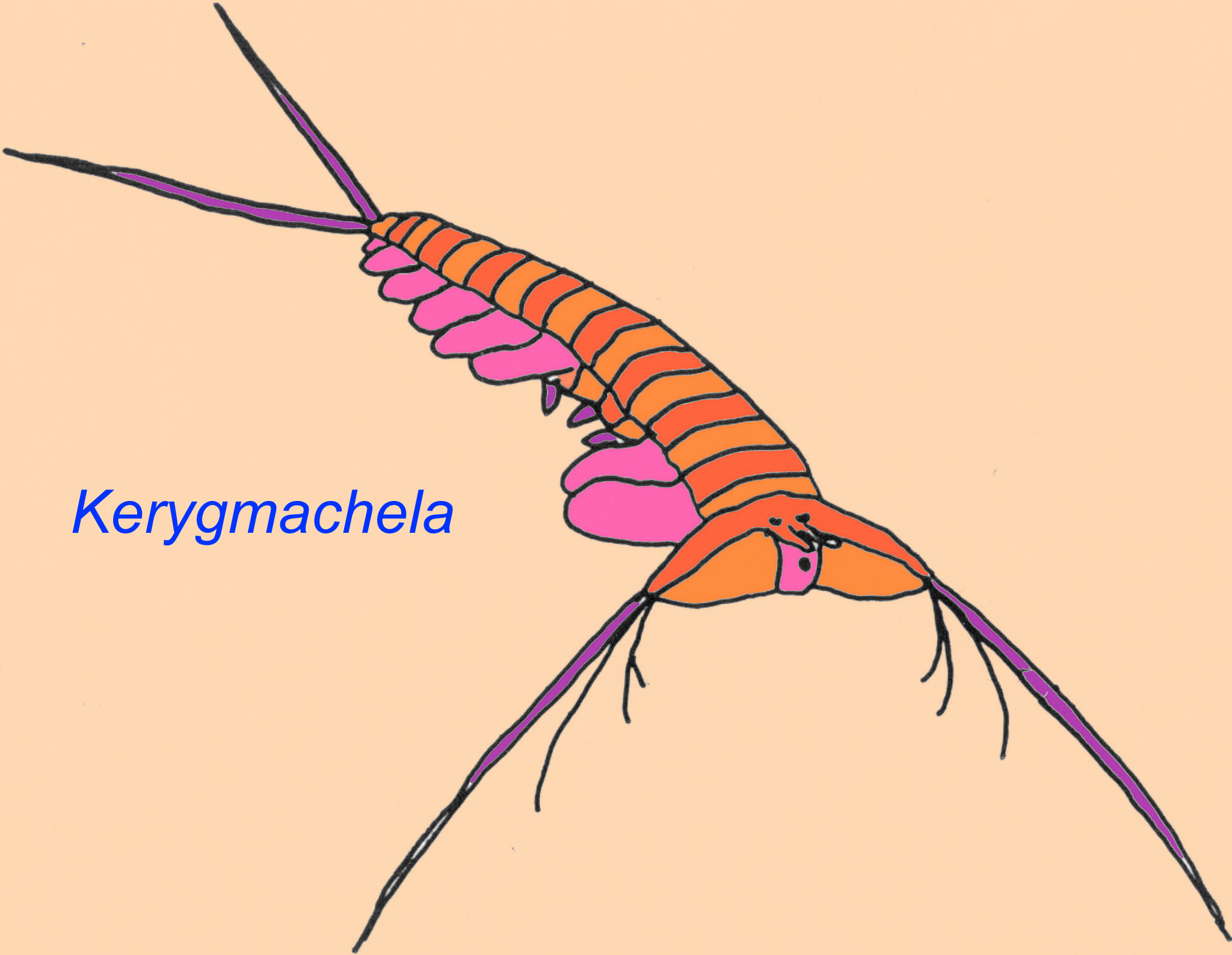 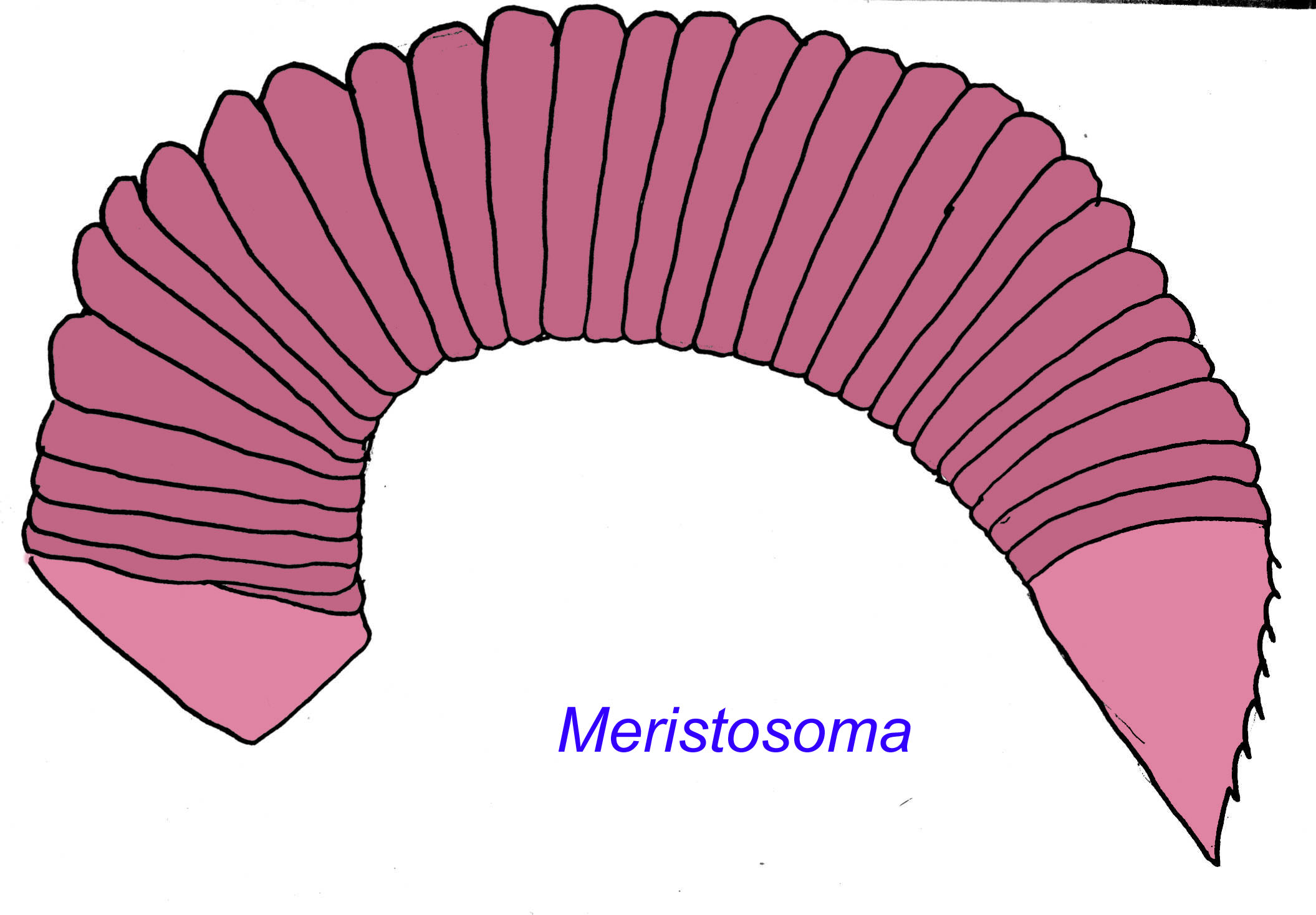 Arthropods make up between 85% and 99% of modern species alive on earth. There are a number of groups of arthropods that were important in the Paleozoic. A bizarre modern group called onychophorans seem to link arthropods to segmented worms. Onychophorans were very successful in the Cambrian and include animals such as Aysheaia. A number of animals which had previously been classified as unknown groups now are classified as onychophorans (Levinton, 1992). Kerygmachela has a mix of both onchophoran and arthropod characteristics (Akam, 2000). The hemolymph of onychophorans contains the respiratory pigment hemocyanins, as do arthropods. Some genetic evidence supports the position of onychophorans as the sister group of arthropods whild other results classify them within the group Arthropoda (Kusche, 2002; Fortey, 1993)

Meristosoma, known from the Middle Cambrian, seems to be a basal form of arthropod, linking myriapods (arthropods which include millipedes and centipedes) to trilobites. It had a long segmented thorax but had anterior and posterior shields unlike the myriapods (Robison, 1995). 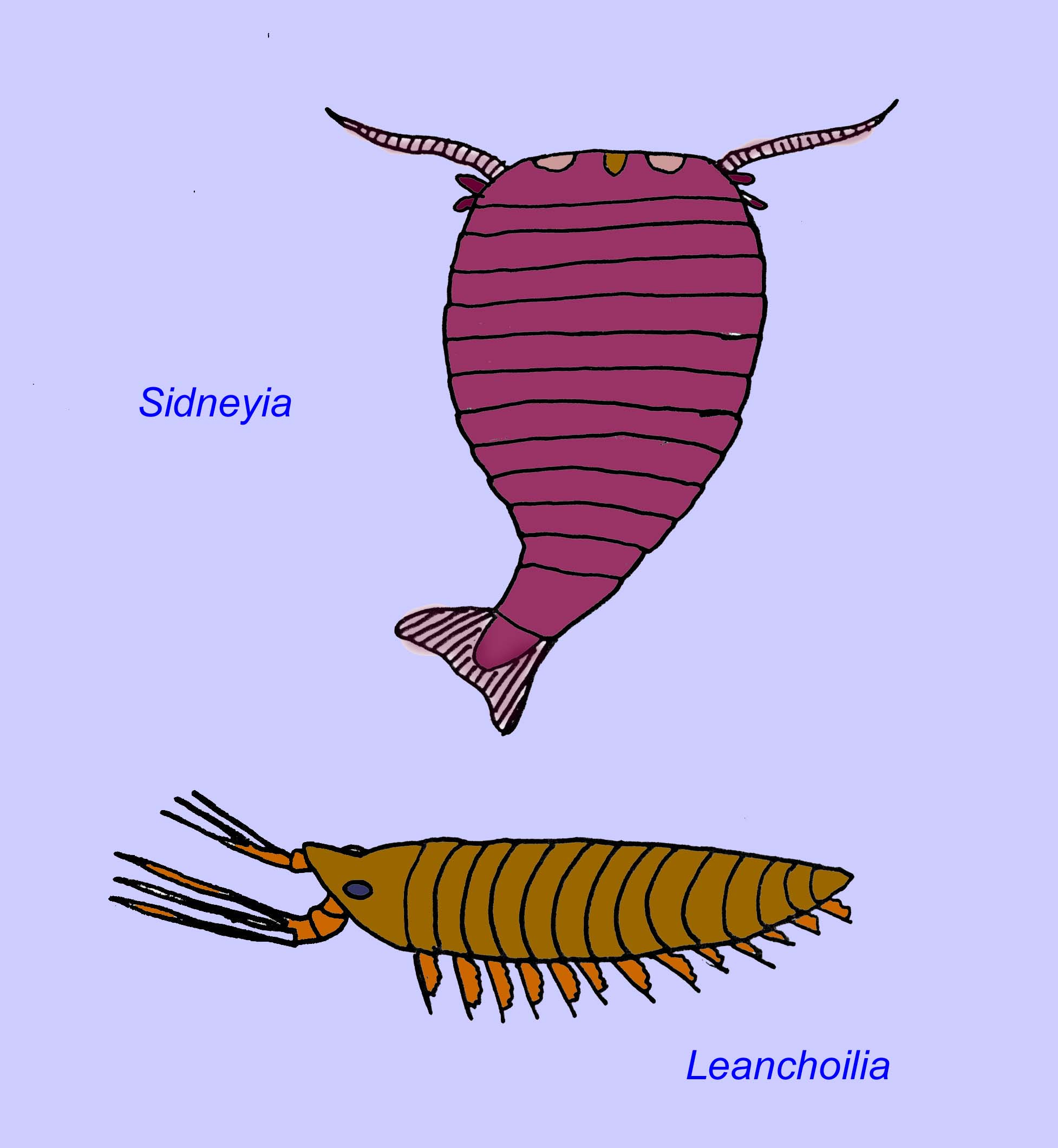 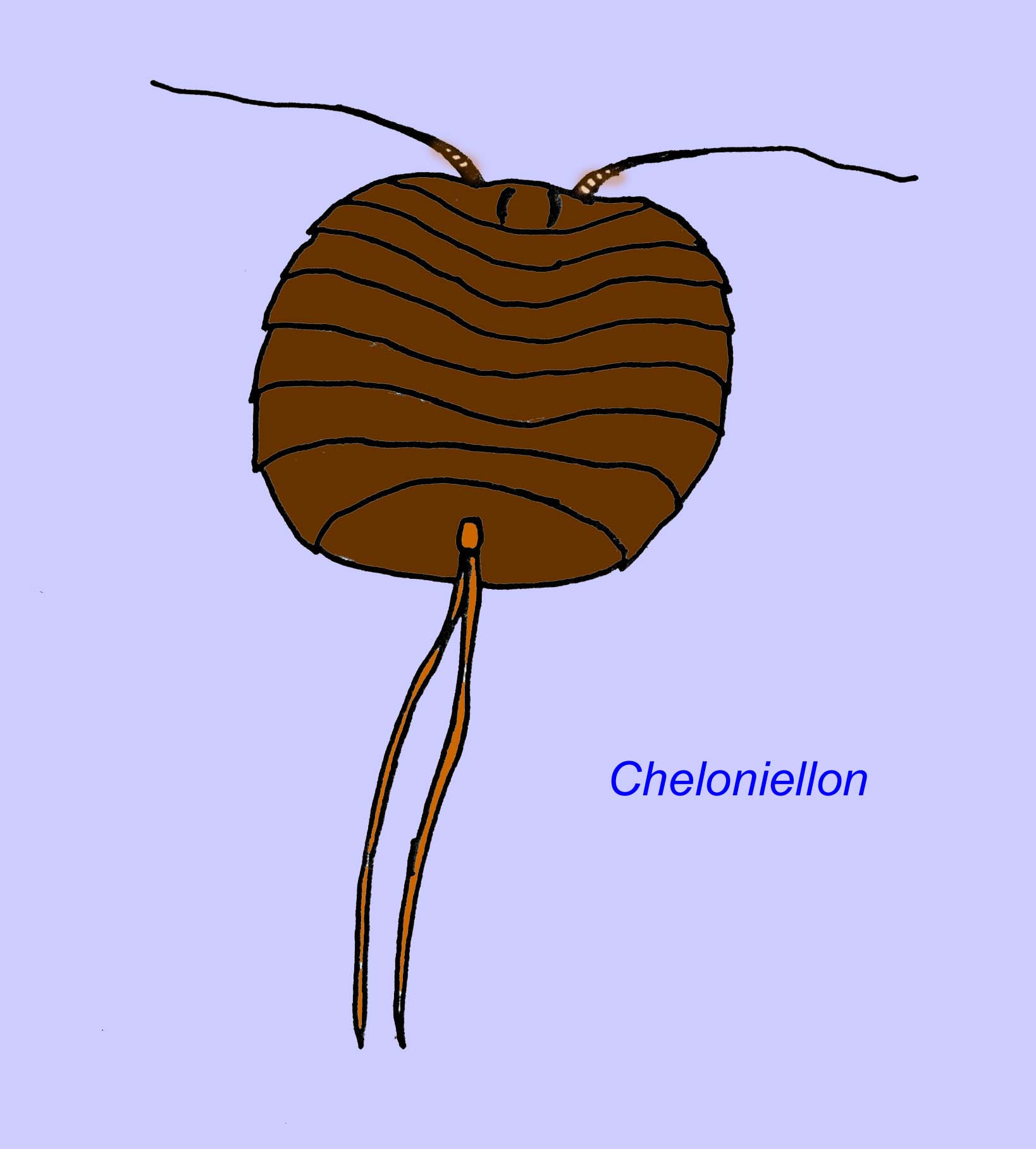 Trilobites are related to a few other groups of extinct arthropods which are classified together as the Trilobitomorpha. Some of these relatives, such as members of the Tetracephalosomita pictured below, possess some characteristics typical of trilobites (Edgecombe, 1998; Sharov, 1966). 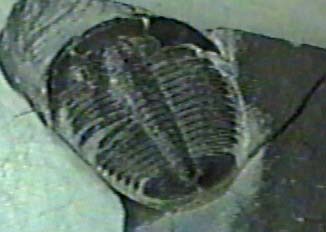 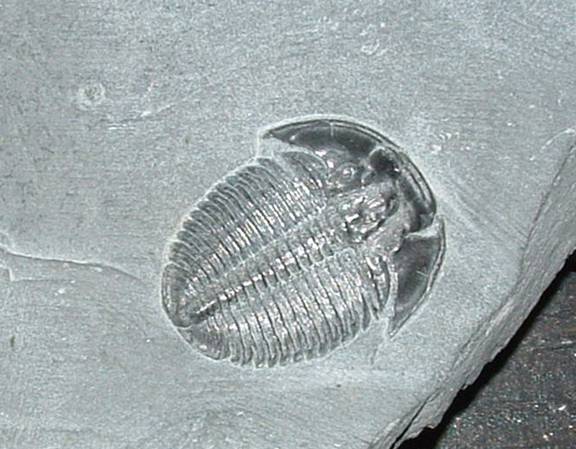 Trilobites survived about 300 million years during which time they diversified into more 10,000 species (Lieberman, 2010). Trilobites were the most common and diverse group of the Cambrian. They were diverse afterwards as well945 genera and 56 families are known from the Ordovician and Siluran alone. Of the two main groups of trilobites in the Ordovician, one group became extinct in the mass extinctions at the end of that period while the second survived into the Siluran (with  of its Ordovician members surviving the mass extinction) (Adrain, 1998). The predators which fed on trilobites included predatory arthropods such as Sidneyia and Utahcaris, cephalopods, and eurypterids (sea scorpions described below).

Trilobites disappeared during the Permian. The exoskeleton of trilobites was shed through a series of molts and many fossils are remains of molted skin rather than entire organisms. Trilobites fed on debris on the ocean floor as adults. The small size and the spines of the youngest juveniles suggest that they swam in plankton as they grew (Prothero, 1998).

Although modern arachnids are primarily a terrestrial group (spiders), marine forms are known from the Cambrian. 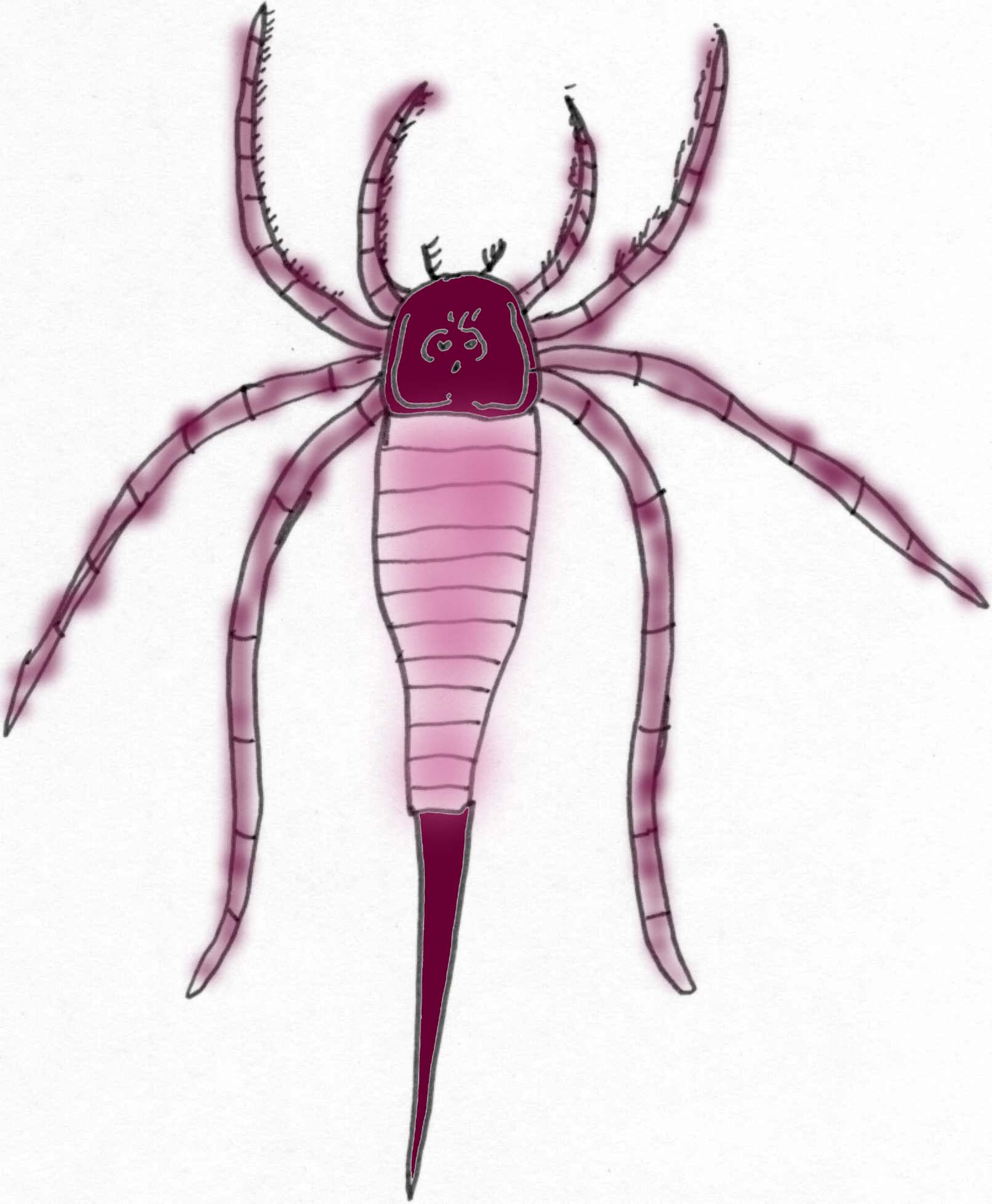 About 200 species of sea scorpions have been identified. The earliest are known from the Late Ordovician and the last known specimens date from the Late Permian (a period of about 210 million years). While they were an aquatic group, their respiratory system probably would have accommodated short trips onto land. While some modified their appendages to become thin, walking stick-like structures, others formed flat swimming paddles. Prior to the Carboniferous, sea scorpions are limited primarily to northern continents although the large pterygotids were able to swim the ocean and spread throughout the world (Tetlie, 2007). A sea scorpion claw has been found of such size that it is estimated that it belonged to an animal 2.5 meters long (Williams, 2007).

Most eurypterids were larger than 1/10 a meter and at least one type reached 2.5 meters (8 feet) in length. They are known since the Ordovician and they were the main predators of the Siluran seas. In the Devonian Period they were replaced by large predatory fish and they became extinct in the Permian (Prothero, 1998). 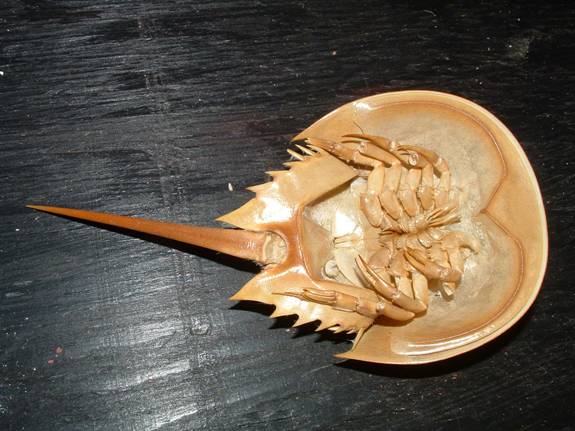 Xiphosurans were known from the Siluran to present. (Another group of arthropods which were once classified with xiphosurans are from the Cambrian.). They have never been overly diverse or abundant. 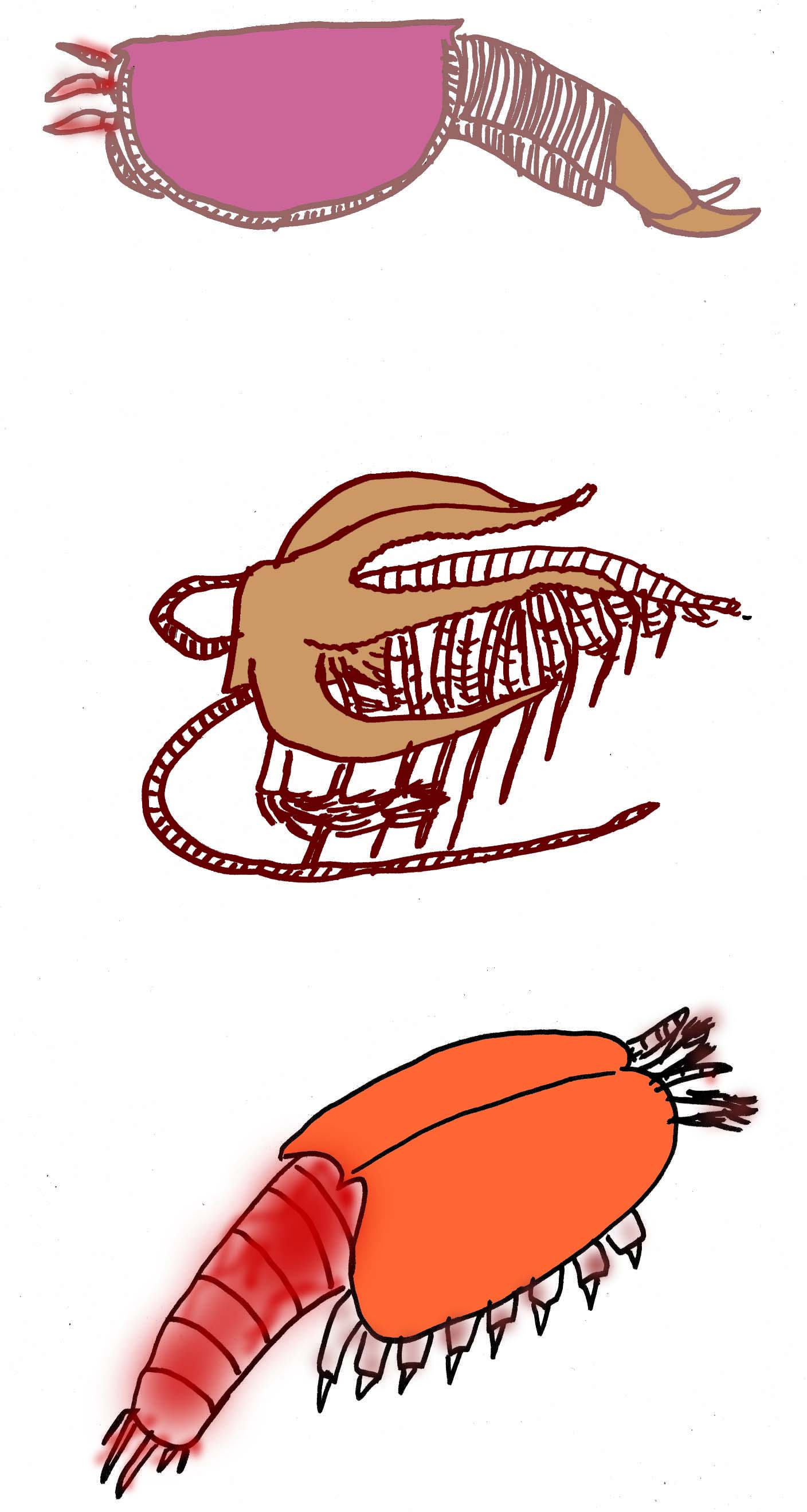 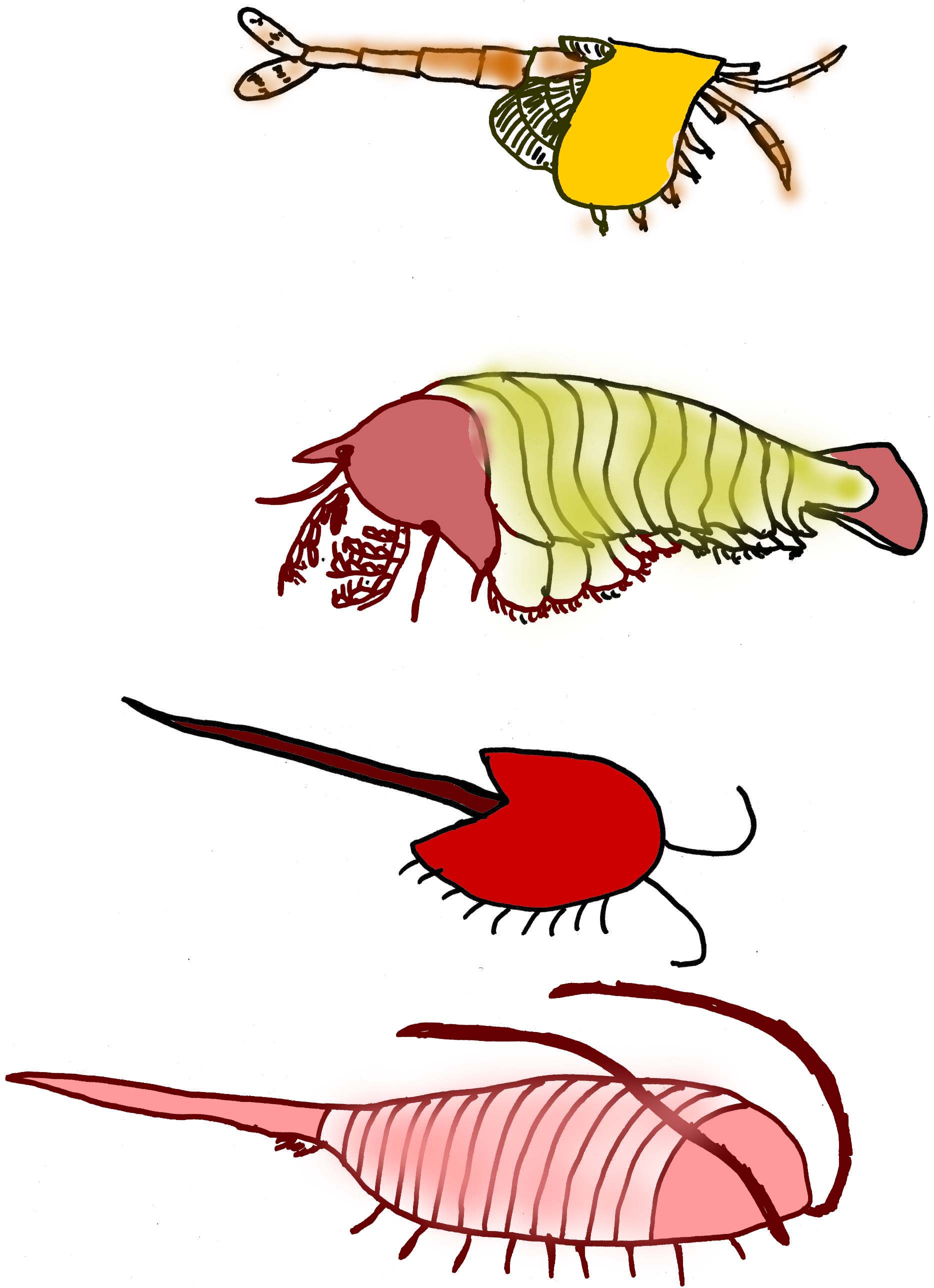 --decapods (crabs, lobsters, shrimp) which are known since Devonian and were extremely successful in Mesozoic

maxillopods: barnacles (known since the Ordovician) and ostracods (very small but the most commonly fossilized arthropods and thus very important in stratigraphy; known since the Early Cambrian)

It is thought that freshwater crayfish evolved from marine lobsters at the beginning of the Mesozoic or just before. There are no known fossils of crayfish in southern continents until the Early Cretaceous (Martin, 2008).