There are 4 basic chordate characteristics:

The notochord is a flexible, elastic rod that runs down the longitudinal axis of the body made of a core of cells in a tough fibrous coat. It is important for movement: without it muscle contraction would cause the entire body to shorten instead of the side-to side body flexion which the chordates depend on. Leeches, for example, lack this longitudinal support rod and extend and retract their bodies rather than swim by laterally moving their backs. 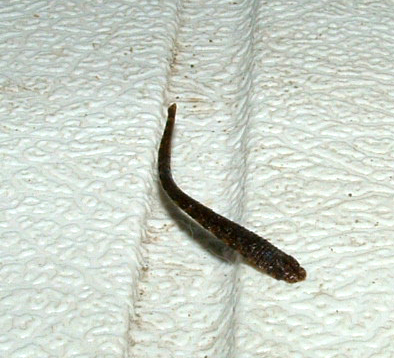 Although the notochord no longer serves this support function in most modern vertebrates (because it has been replaced by a vertebral column), the notochord is still present in all vertebrate embryos where it promotes the formation of other structures (like the central nervous system). In adult humans, the remnants of the notochord form the central region (nucleus pulposus) of the intervertebral disks between our vertebrae.

The notochord of the primitive chordate, the lancelet (Amphioxus) is depicted in the following images. 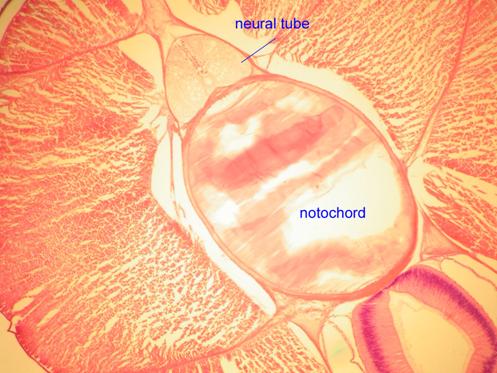 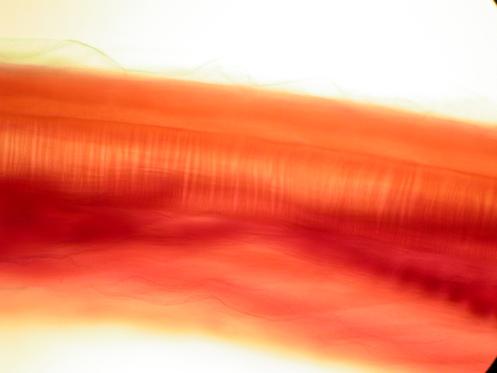 The notochord of a jawless fish (a lamprey) is visible below 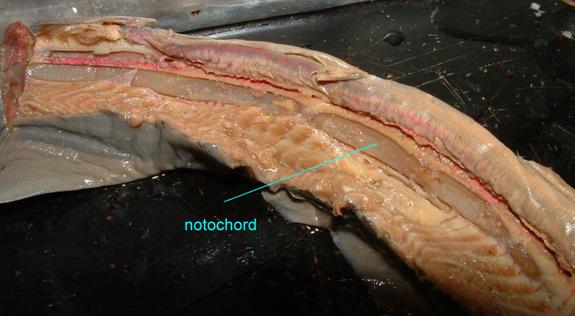 Even though humans lack a continuous notochord as adults, it is present in embryos, as is depicted in the following image.

In every chordate, the walls of the pharynx are pierced or nearly pierced by a longitudinal series of openings. In humans, the pharynx consists only of the space between the oral and nasal cavities and the larynx. In primitive chordates and fish, the pharyngeal slits function in respiration and feeding: water that comes in the mouth leaves through the slits. Organisms can filter this water for food and in fish gills became associated with these slits.

In humans, these slits with their accompanying tissues are important in the organization of blood vessels, cartilages, glands, and bones in the mouth, throat, and upper chest regions. Occasionally, a pharyngeal slit remains open in an adult human which is corrected surgically. The following are images of the pharyngeal arch derivatives of human embryos.

The pharyngeal arches of a tunicate are evident in the following photo: 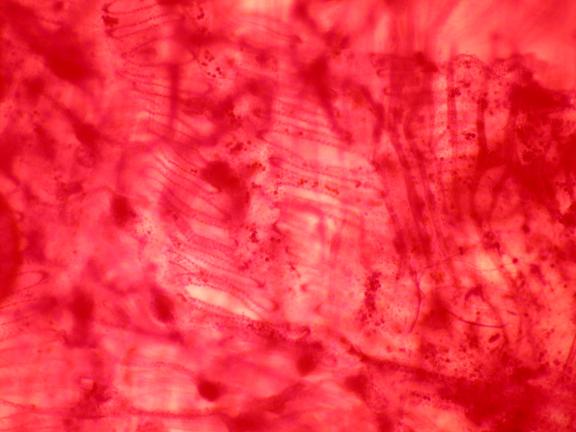 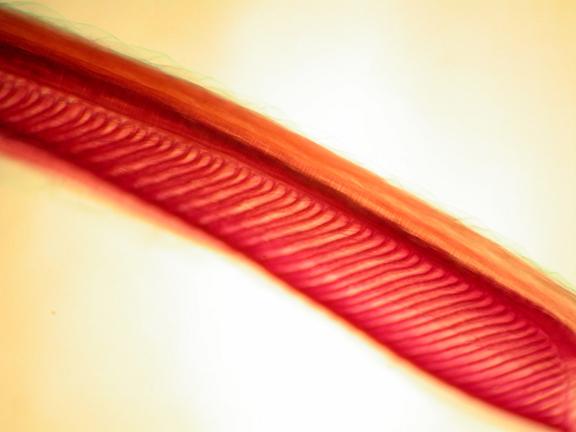 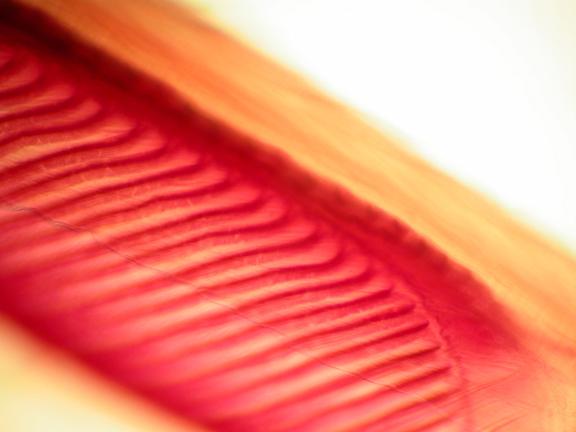 In the hagfish, the gills form in obvious pouches in the pharynx. 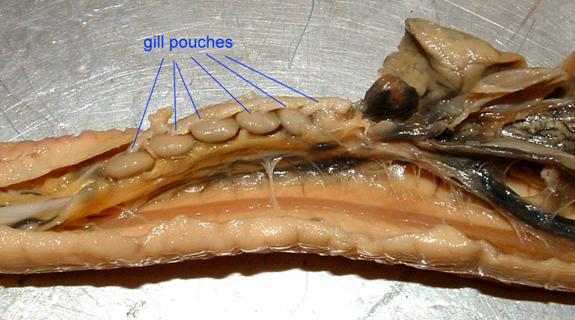 The blood vessels and cartilaginous bars of a shark's pharyngeal arches are preserved in the image below. 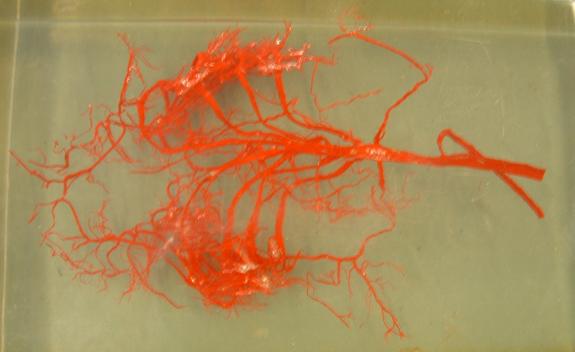 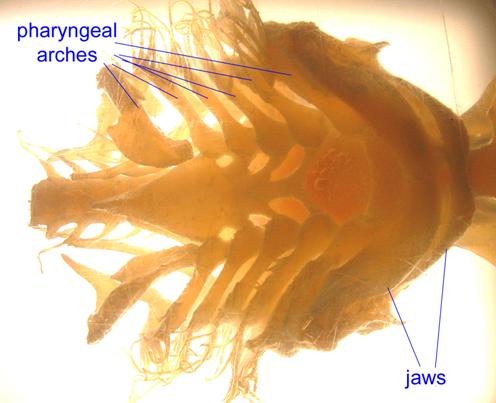 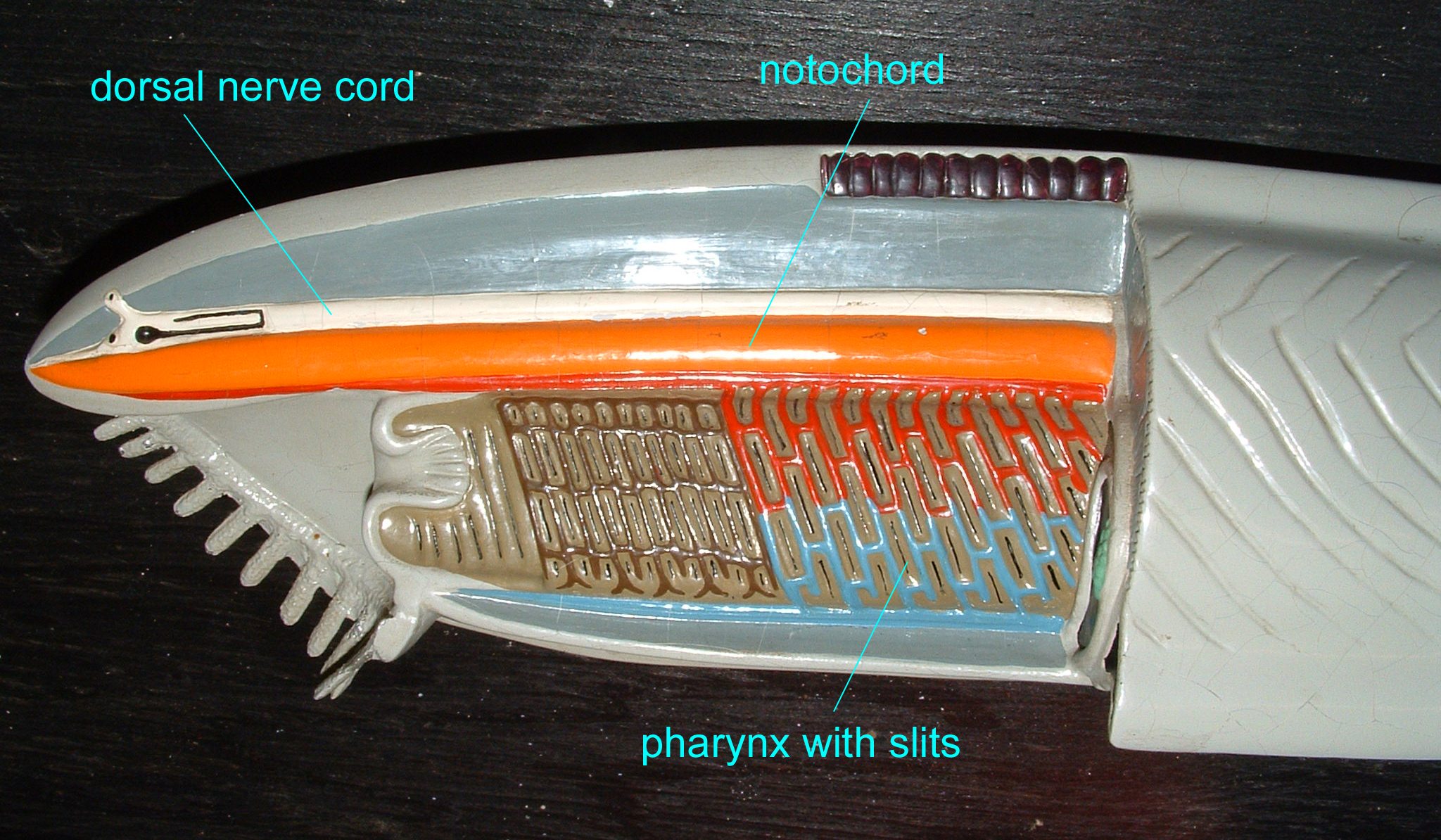 In chordates, the nervous system forms as a dorsal hollow tube as opposed to a solid ventral tube typical of other coelomates. In vertebrates this forms the central nervous system's brain and spinal cord. As adults, our central nervous system remains hollow, allowing cerebrospinal fluid to flow through it. Note that in a slide of the brain in a developing chick, the nerve tube is hollow. 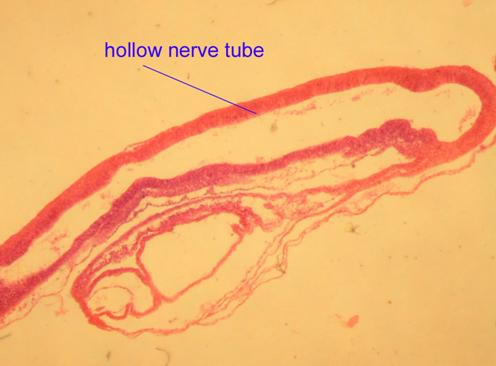 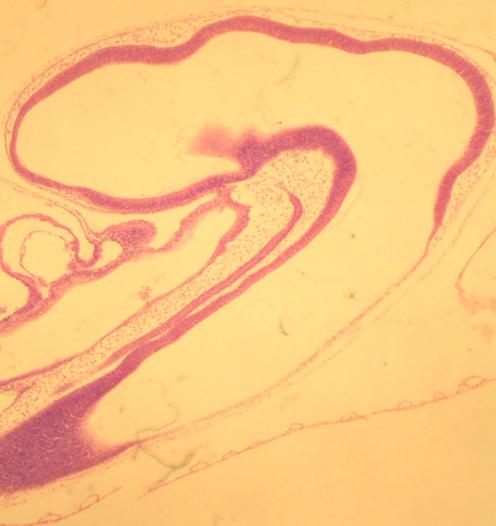 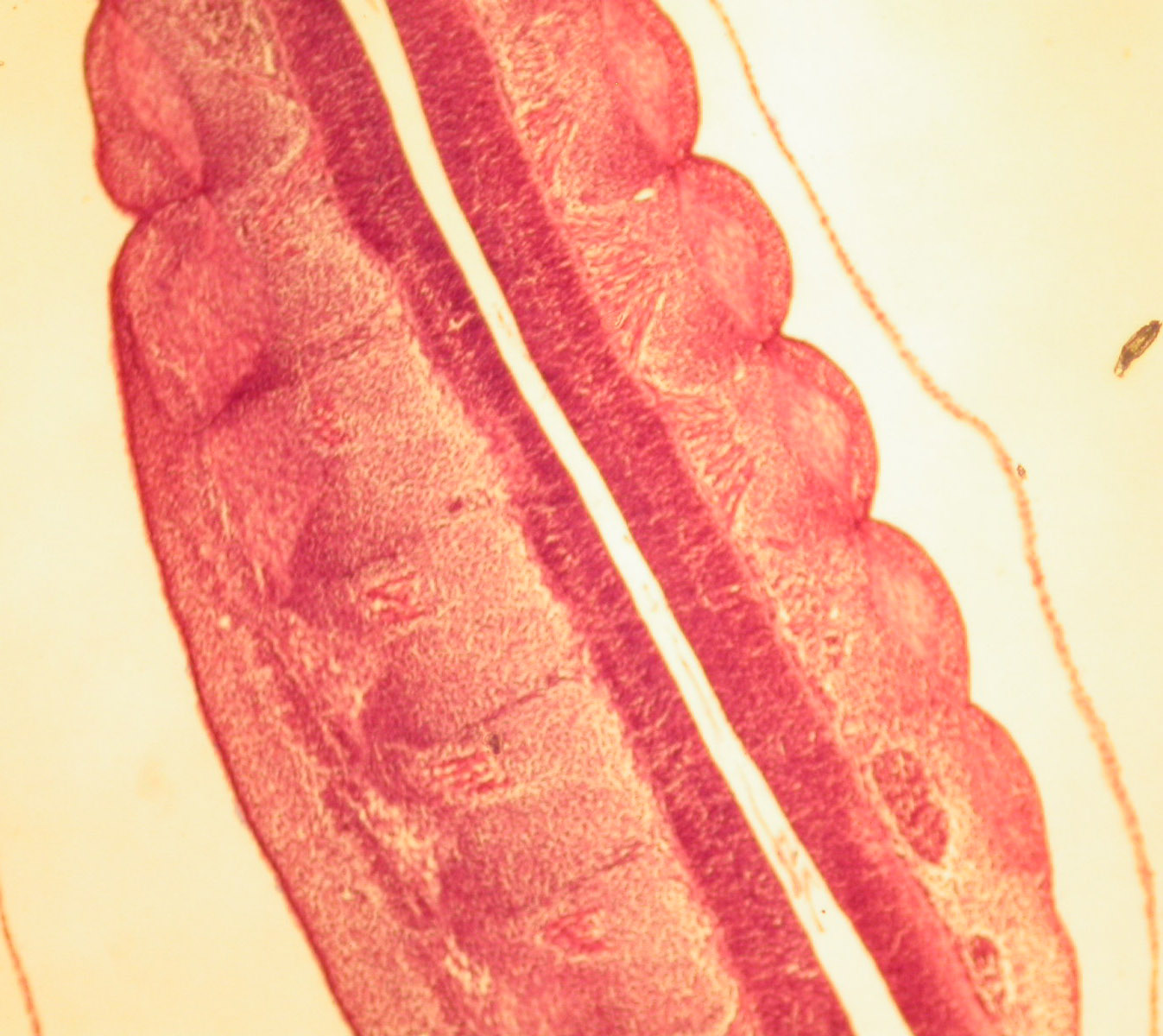 In most coelomates (worms, insects, or the hemichordate pictured below) the digestive tract stretches the length of the body and the body ends with the anus.

In chordates, there is a muscular tail which exists behind the anus through which the digestive tract does not pass. It seems that the zinc finger transcription factor Manx was critical in the evolution of chordate tails, given that its mutation can cause tailless conditions in both urochordates and vertebrates (Satoh, 1995).

The four characteristics given above are the main features which separate chordates from other animals. There are other characteristics which chordates share, such as segmentation. This segmentation is visible in the development of the regions of the brain, our cranial and spinal nerves, our blood vessels, muscles (rectus abdominis even in adults), etc. For example, segmentation is evident in the developing hindbrain (such as in the chick brain below).

Segmentation is obvious in the blocks of embryonic muscle known as somites. 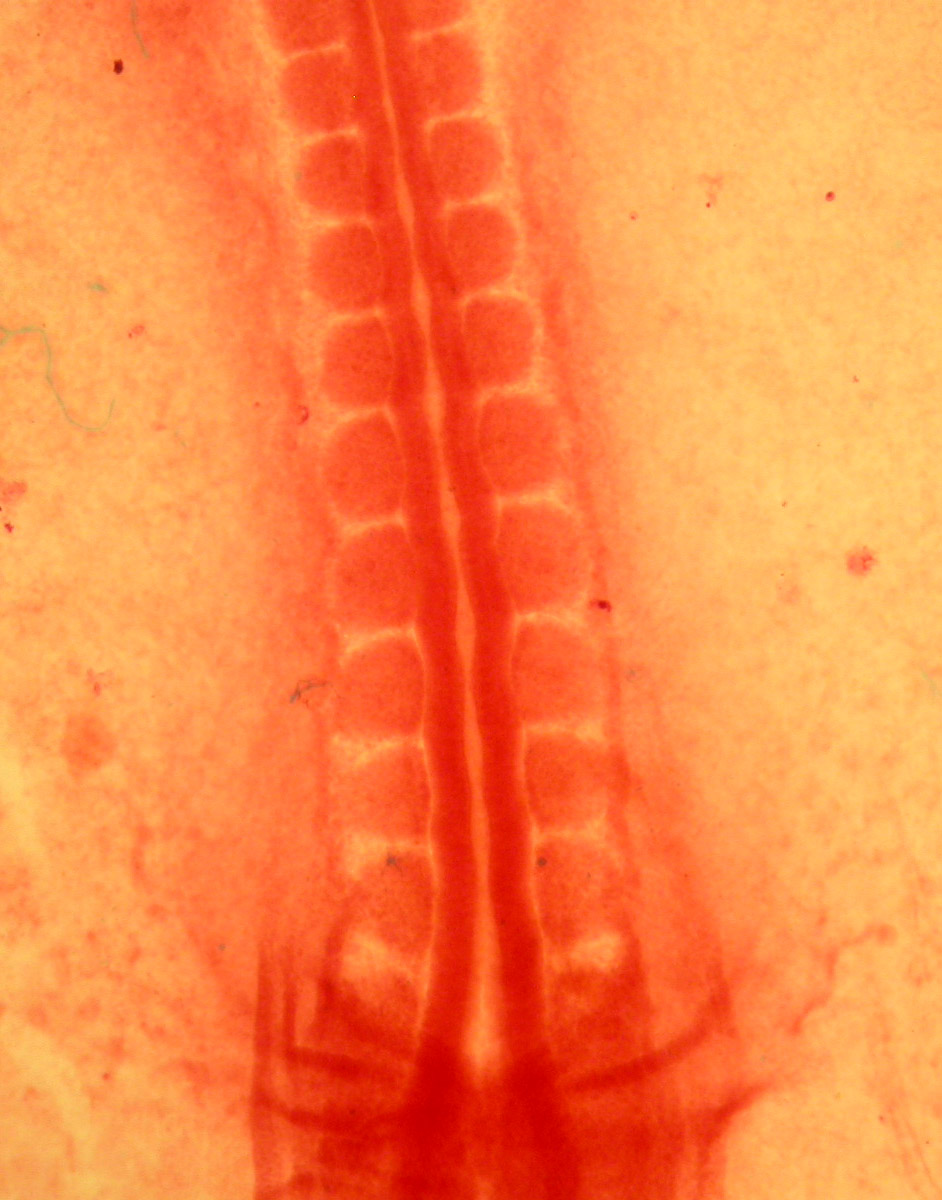 Somites are evident in the following images of Amphioxus. 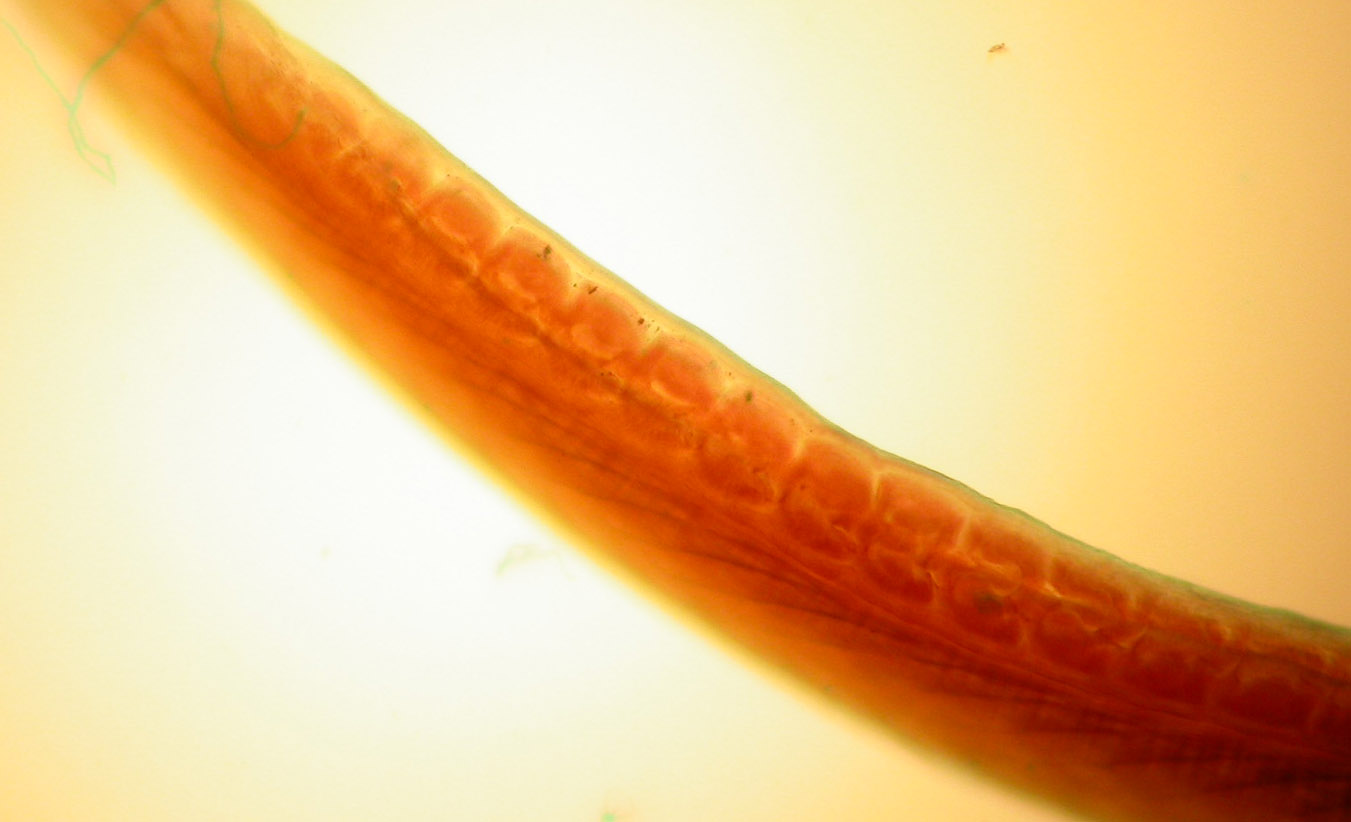 Somites are evident in the following image of the embryonic chick. 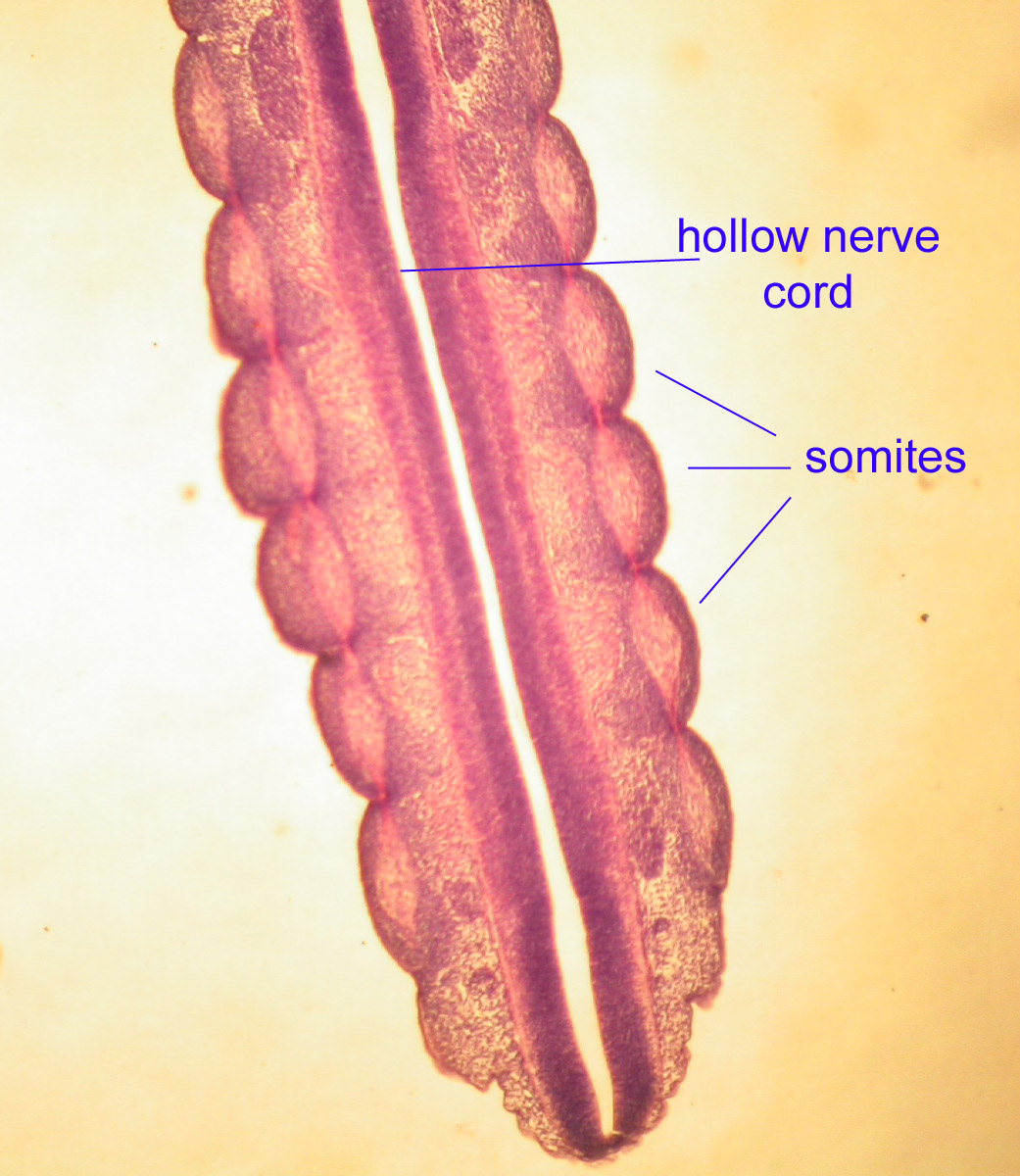 Segmentation is also evident in the developing pharyngeal arches. 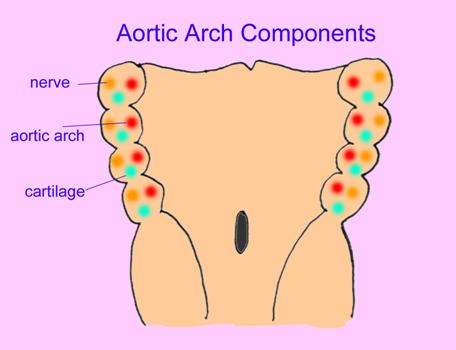 The Ediacaran fossil Ausia has been classified as a urochordate (Xiao, 2009). Several primitive chordates are known from the Cambrian Period. Haikouella lanceolata (3 cm) is known from a 530 million years old fossil bed of Yunnan , China . It was similar to Yunnanozoon (in such features as its large dorsal muscular fin with about 2 dozen straight segments and its large pharynx with 6-7 branchial arches) but had additional features such as a heart, notochord, ventral and dorsal aortae, a post-anal tail, gill filaments, a relatively large brain, and possibly lateral eyes.

Cathaymyrus diadexus, 2 cm, possessed V-shaped segmented muscles and may have remains of a notochord (Shu, 1996).  Pikaia is a cephalochordate from the Burgess Shale of 540 mya which had a dorsal nerve chord, notochord, and myomeres (blocks of muscle). Metaspriggina is known by 1 incomplete specimen (it is missing its head) from the Burgess Shale of Canada. It measured about 6 cm. It appears to have had a post-anal tail and myomeres (Briggs, 1994). Fossil Lancelets are known from the Permian (Long, 1995).