One of the most important changes in vertebrate history was the evolution of jaws.  A shark skull is depicted below, representing the most primitive group of jawed vertebrates alive today. 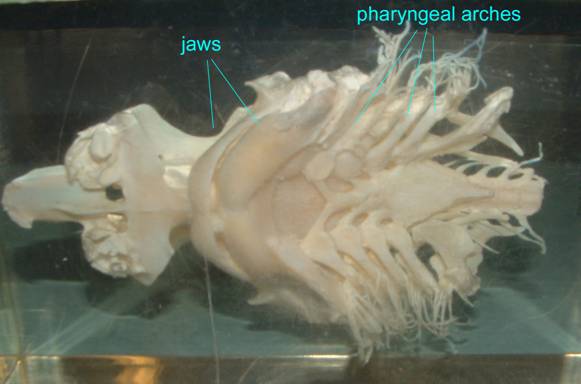 Jawed vertebrates, known as gnathostomes, diversified to take advantage of a broad range of food sources, conquered the seas and eventually the land and air as well. Pelvic fins did not appear until the jawed vertebrates and, in early jawed vertebrates, the pelvic and pectoral girdles were not similar in their structure. Two groups of placoderms lacked pelvic fins and it is possible that pelvic fins evolved during placoderm diversification In the placoderm groups which possessed pelvic fins, these structures were simple (Coates, 2003).The fin/limb structures are originally made of cartilage in gnathostome embryos and may later be converted to bone.  The front elements are known as the pectoral girdle and fin; the hind elements are known as the pelvic girdle and fin.  The pectoral and pelvic fins of sharks are depicted below. 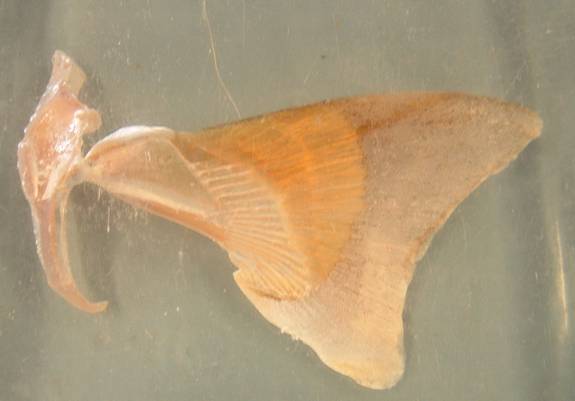 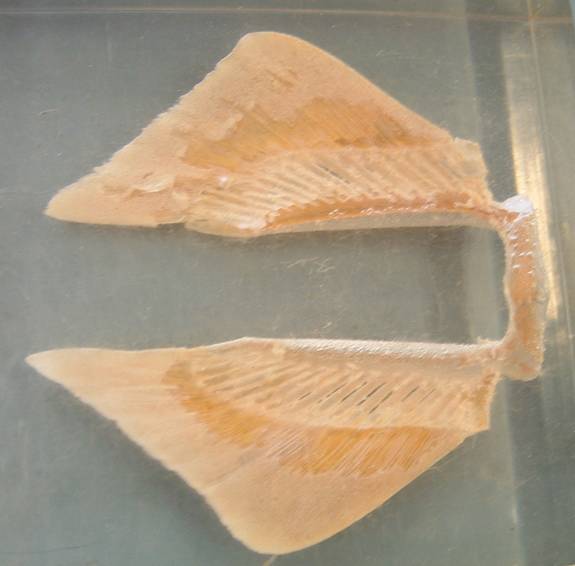 In fish, the pectoral girdle is attached to the skull (thus there is no “neck” separating the skull and shoulder in fish).  Primitively, the pelvic girdle had no attachment to the vertebral column.  In early gnathostomes, the notochord was still the primary longitudinal support and the pieces of individual vertebrae had not yet fused.

Although gnathostomes were present in the Ordovician, their remains are difficult to identify. Sharks and possibly placoderms and acanthodians are thought to have been present (Blieck, 2003). Placoderms are known from the early Silurian (about 430 million years ago) and disappeared at the end of the Devonian (about 360 million years ago). Fossil fragments which might belong to placoderms are known from the Ordovician. The optic capsules of placoderms resemble those of jawless fish more than those of other jawed fish. One placoderm possessed seven extrinsic eye muscles, the only known vertebrate to possess more than the standard six (Burrow, 2005; Blieck, 2003). Placoderms lacked teeth but possessed dermal bones associated with the jaws known as gnathal bones.  In the Devonian, placoderms were the most diverse group of fish and more than 400 species are known which range in size from 10 mm to 7 meters (Qu, 2010).

While acanthodians (such as Nostolepis and Gomphonchus) were apparently able to achieve distribution patterns over large geographic areas in the Middle to Late Silurian, placoderms were more likely to be endemic with one group known only from South Asia.  The earliest definite remains of placoderms are of a group known as antiarchs from South Asia which were endemic to that region.  Several different placoderm lineages are known from the Siluran strata  (Qu, 2010).

A group of fish known as antiarchs, such as the basal form Silurolepis platydorsalis, are either classified as the earliest group of placoderms or the sister group of all other jawed vertebrates. They mainly occurred in freshwater and had weak jaws (Zhang, 2010).  One group of antiarchs, the Yunnanolepiforms, are known from the Silurian and early Devonian of South Asia.   Ningxialepis possessed a covering of small spines on its dermal armor (Jia, 2010).

Placoderms were the dominant fish of marine and freshwater environments during the Devonian Period but became extinct at the end of the Devonian. For sixty million years they had become one of the most successful groups of fish throughout history. More than 200 genera of placoderms are known which have been divided into seven large orders (Long, 1995).

There is debate over how placoderms should be classified: as the basal group of jawed fish, as a group between sharks and bony fish, or a sister group of sharks (Long, 1995). It is possible that the diverse groups of placoderms are not all closely related to each other and that sharks originated from on group of placoderms. One type of placoderm is known to have had claspers like male sharks (Perrinne, 1999). One group of placoderms possesses male claspers which supports their classification with sharks. Placoderms also possess a support for the eye called the eyestalk similar to a structure in sharks (Long, 1995). Placoderm braincases possessed a number of structures shared among jawed fish such as the position of several arteries, the pathways of nerves, and perhaps the jaw articulation (Maisey, 2005). Many placoderms possessed lateral line organs (Miles, 1971). The jaws and nasal region of placoderms were similar to those of sharks (Miles, 1971).

The most primitive placoderms did not have much armor and resembled rays in their broad pectoral fins. Most placoderms had a massive head shield (that could be 5 cm thick in some cases) and, as a result, they were probably poor swimmers.  Their postcranial skeleton was composed of cartilage and resembled that of sharks.  They are clearly distinct from bony and cartilaginous fish on the basis of many features such as their skull bones (which cannot be compared to the skull bones of other fish), jaw muscles (on the inside of the jaw), and the possession of a single gill opening. 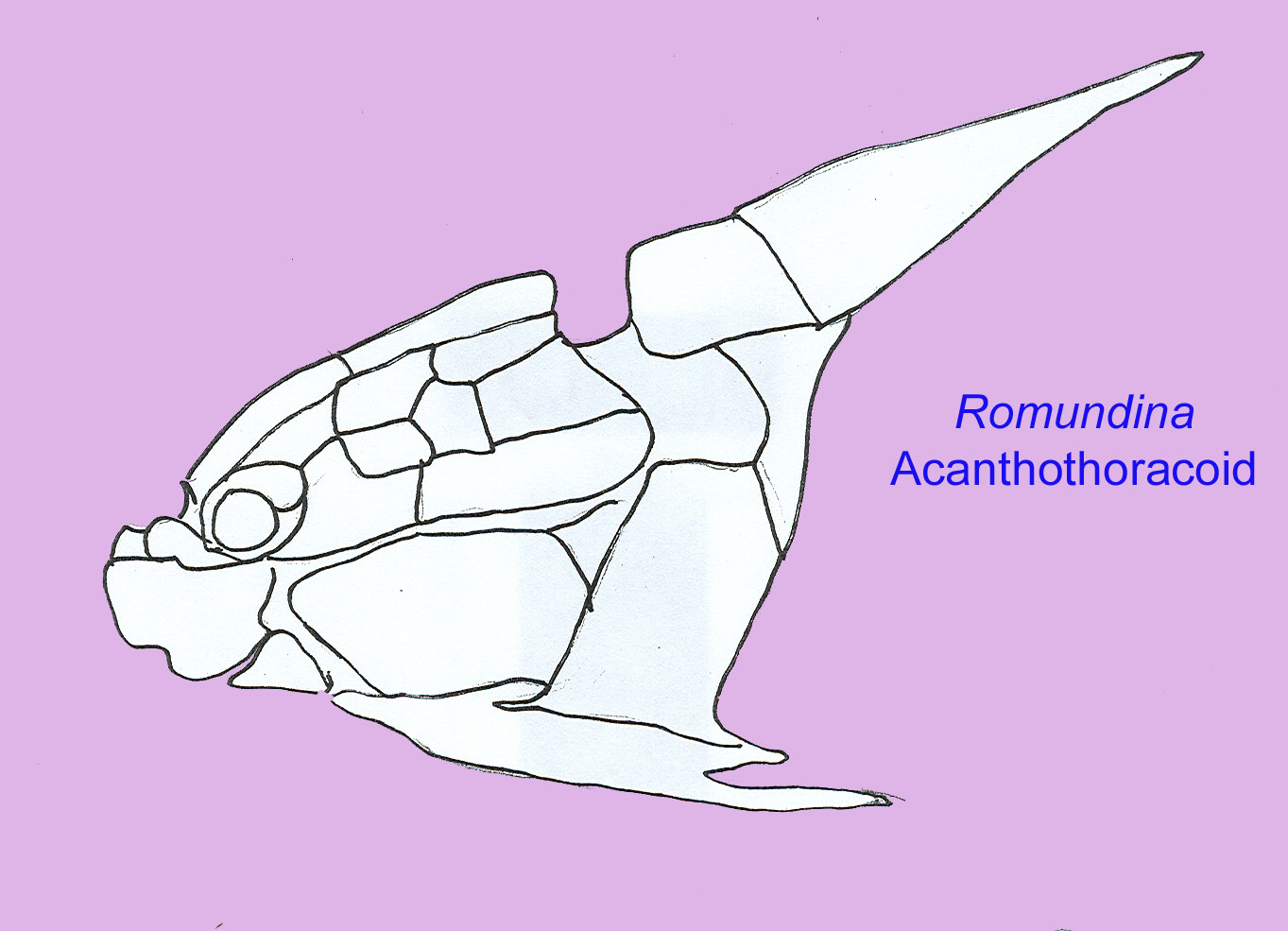 Although many workers have concluded that the skull bones of placoderms and bony fish are not directly homologous, there is evidence for homology in the elements of the pectoral girdle (Zhu, 2001). 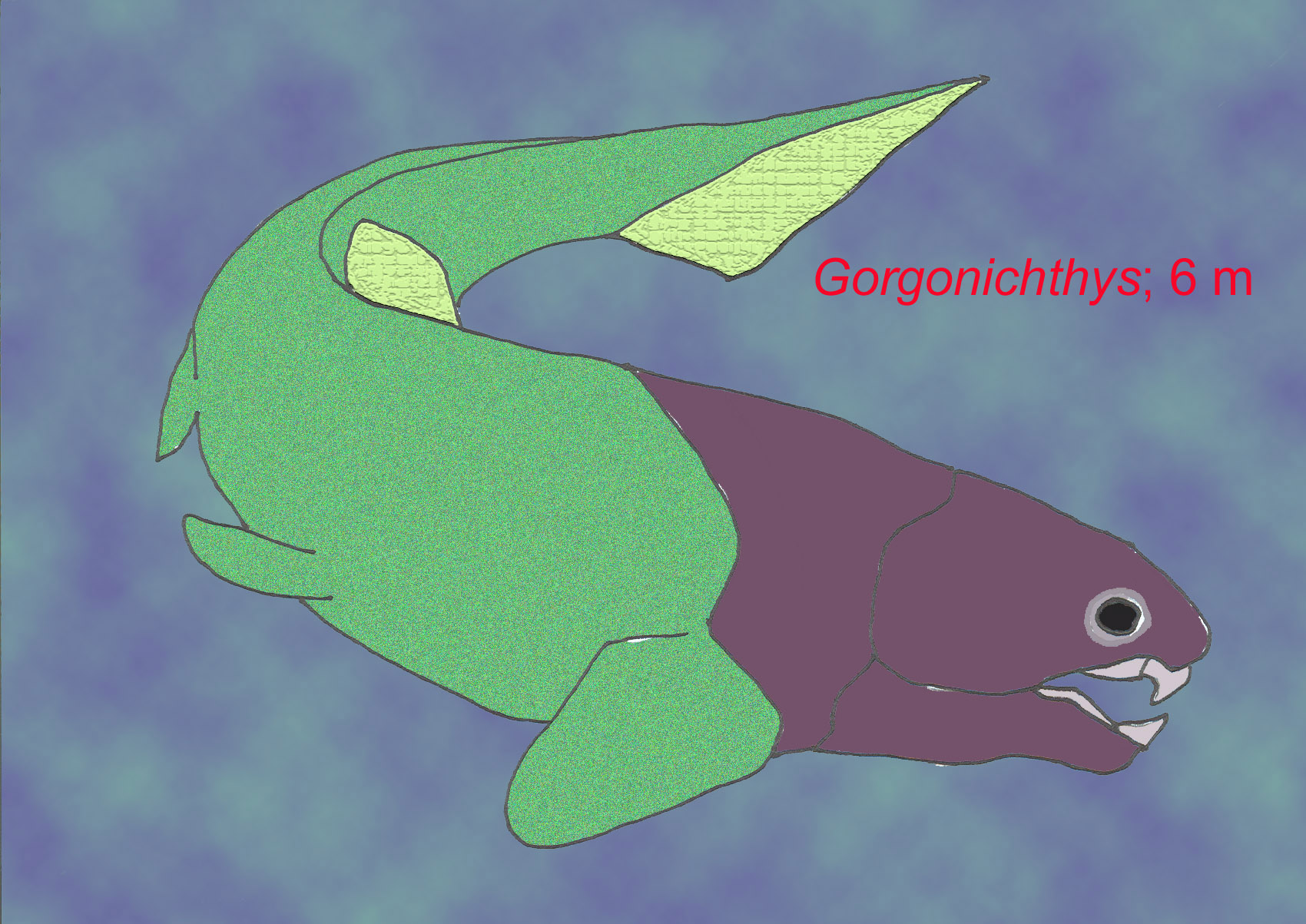 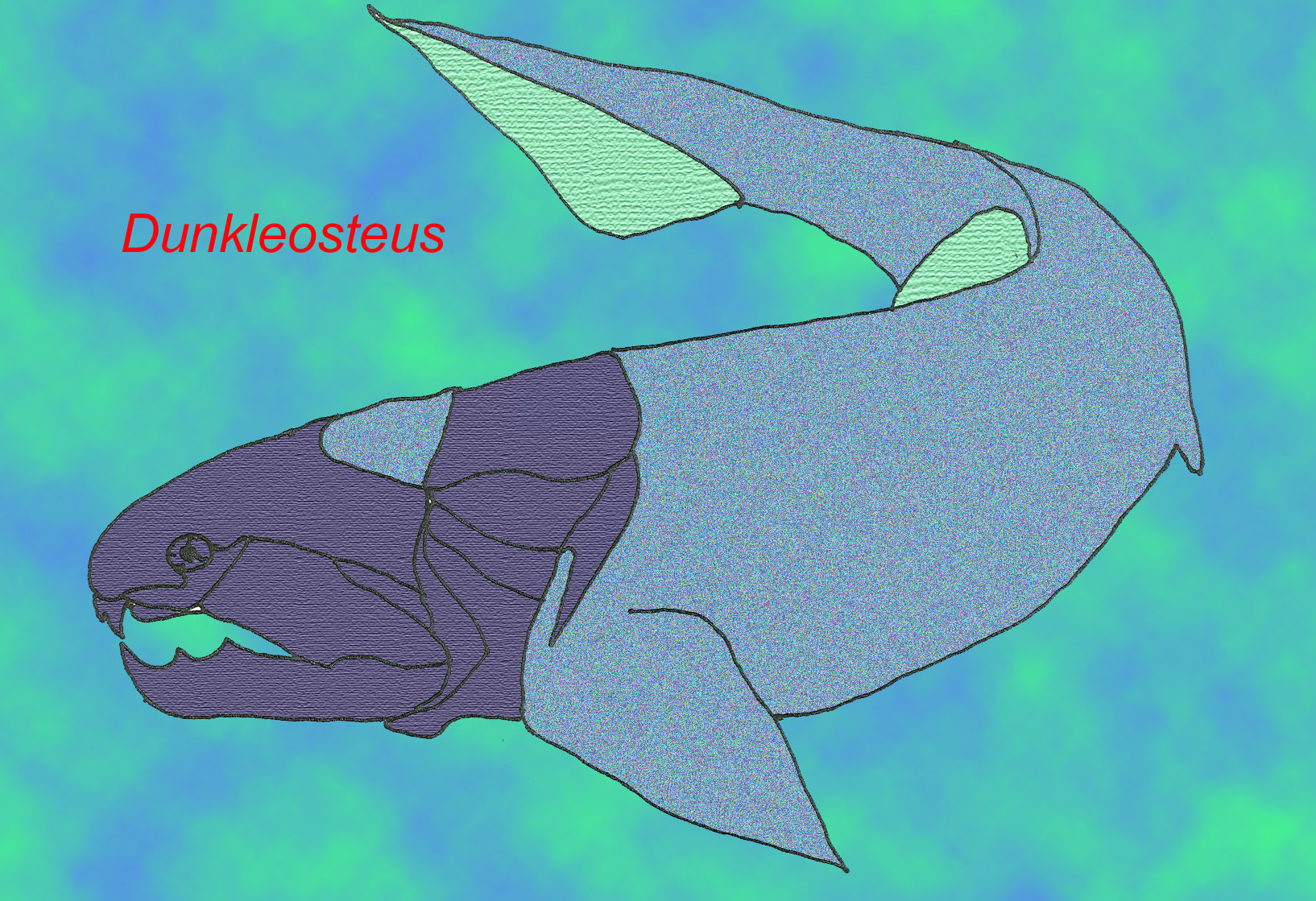 Dunkleosteus (Dinichthys) could grow to over 10 m and was the world’s largest animal until the evolution of the dinosaurs.

Placoderms possessed clasper-like structures, like modern sharks, suggesting that fertilization occurred inside the body of the female. One detailed fossil of the placoderm Materpiscis attenboroughi, gives evidence of a fetus developing inside the body of a female, complete with an umbilical cord (an indication of some sort of a placenta) (Carter, 2008).

Some placoderms (Rhenanida) possessed a skull composed of many small bones while in most the head shield was composed of large bony plates. In some the trunk shield was long and in others it was short. Many were flattened to feed on the bottom and some were likely to have been blind. In one group (the arthrodires) the advanced forms possessed a ball and socket joint between their head and trunk shields (while the simpler forms possessed a simpler sliding joint). 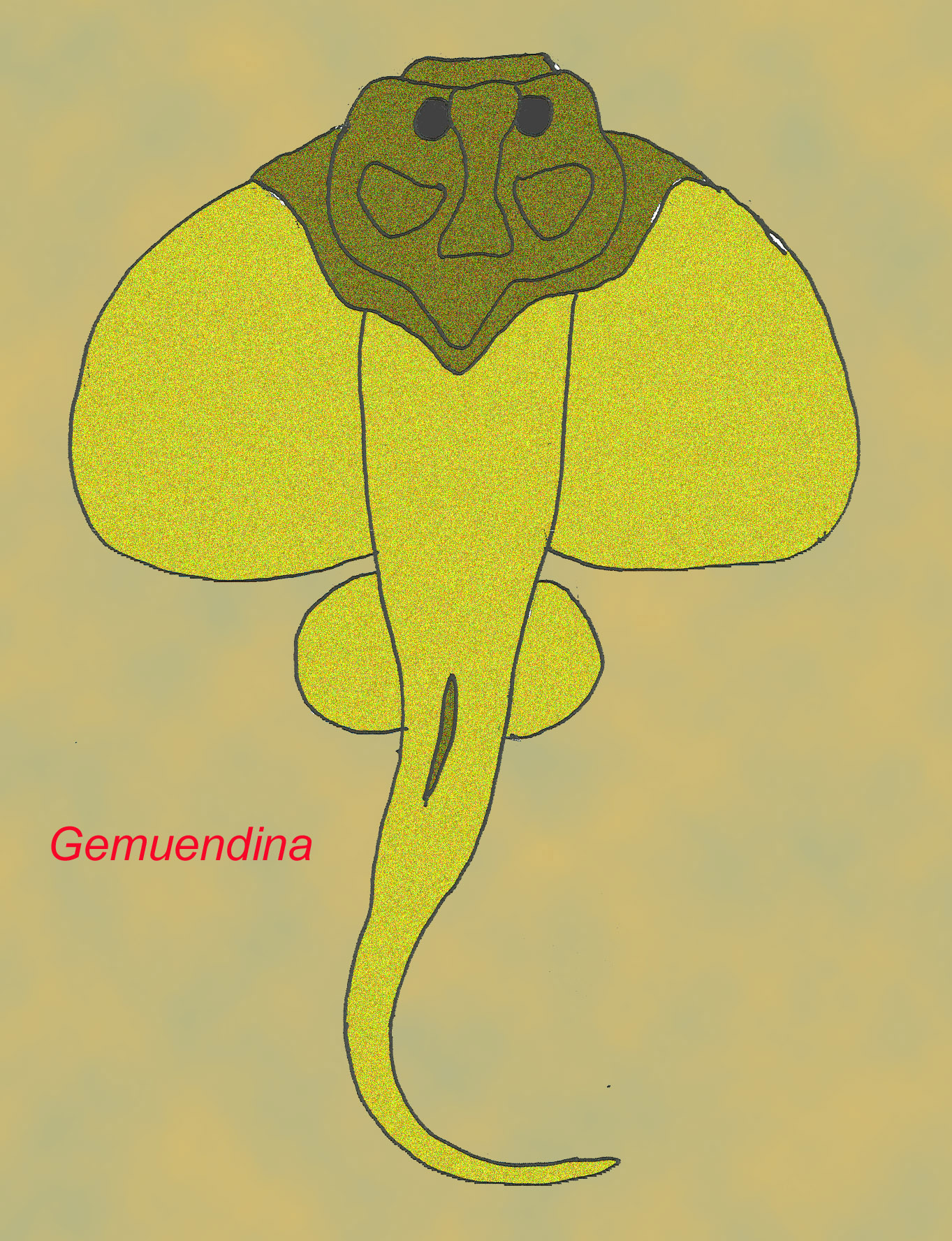 Some had dagger-like teeth, others had flat teeth for crushing, and others possessed weak teeth and perhaps depended on filter-feeding. Many were less than 5 cm. Some advanced placoderms modified ancestral jaws so that the jaws and head shield were more firmly attached at multiple points (compared to the original attachment beneath the eyes) and in some the single jaw unit in ancestral forms was divided into separate segments. Others lost the connection to the bone of the head shield to produce jaws that were probably capable of protrusion (Miles, 1971).

One group, the antiarchs, possessed “arms”—pectoral appendages which were surrounded by bone and often segmented. More than 100 species of Bothriolepis are known from every continent including Antarctica, making it the most successful placoderm genus. Most species lived in freshwater habitats. Fossils suggest that Bothriolepis possessed lungs ant its arm-like appendages may have enabled it to move onto land (Long, 1995). 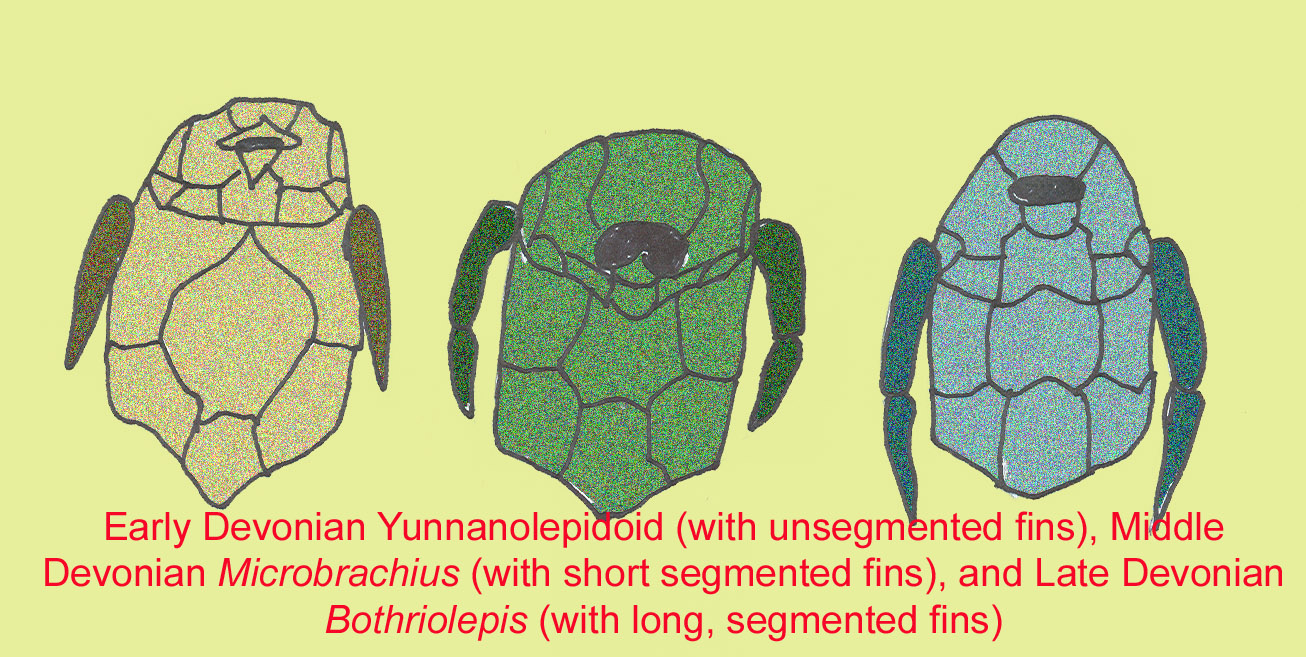 While most placoderms lacked teeth, teeth are known in a few derived forms indicating that the presence of teeth evolved at least twice in gnathostome lineages.  Although osteichthyes, acanthodians, and cartilaginous fish are all characterized by the presence of teeth, a few early acanthodians and cartilaginous fish lack them, indicating that teeth might have evolved more than twice in higher gnathostomes as well (Smith, 2003).

Some placoderms evolved modified body forms such as back spines and snouts (Long, 1995).

Placoderms possessed a scapulocoracoid element and dermal bony elements may correspond to the extracleithral elements in the shoulders of primitive bony fishes (Goujet, 2004).