The most primitive living things are unicellular: the entire organism is composed of one single cell. Some organisms can live as individuals cells or as groups of cells in a colony. If the cells of a colony are separated, they can continue to live as individual cells or form a new colony. No cells are specialized for any specific task. The modern alga Volvox is a good example of this: the adjacent photo is of a Volvox colony.

While many algae live in these simple colonies, some algae actually do have cells specializing to perform different tasks (they have tissues that are rootlike in function and leaflike in function).

By 570 million years ago, algae are known with a variety of anatomical and reproductive characteristics (Xiao, 1998). The fossil record has preserved a diversity of prehistoric algae such as those depicted below. 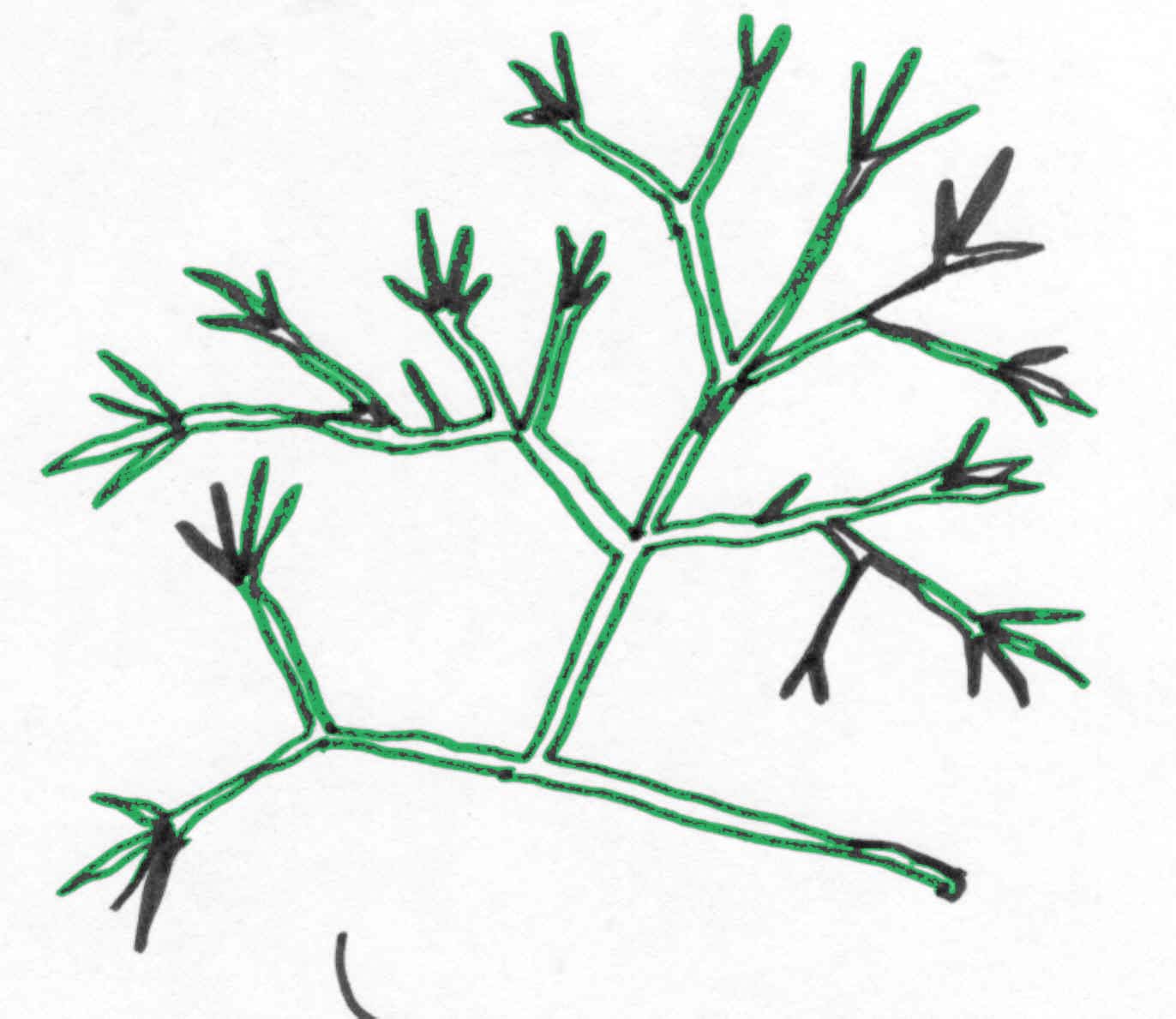 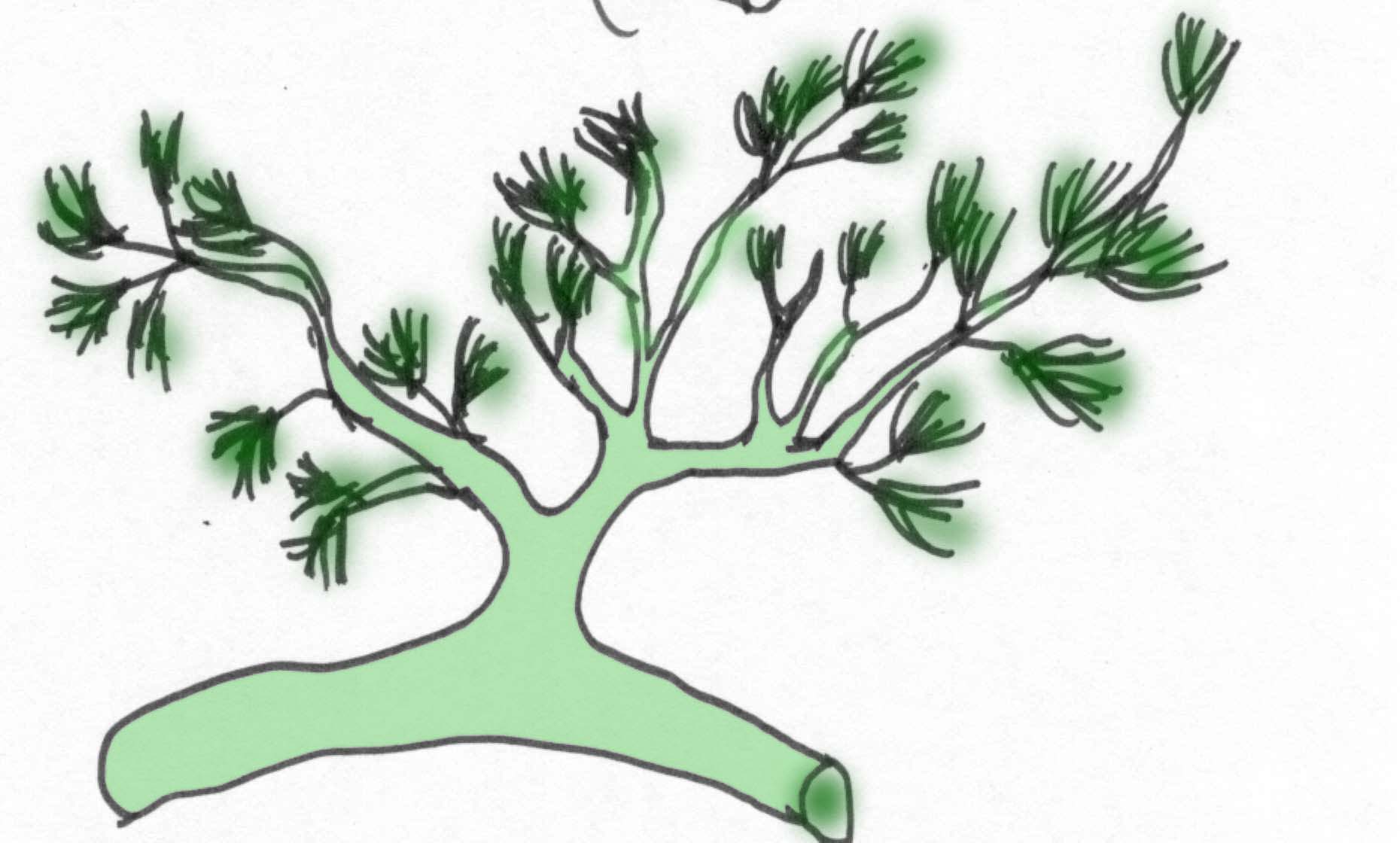 Many of the pre-Ediacaran fossils represent simple multicellular colonies of bacteria, eukaryotic algae (including green and red algae), and forms which bear resemblances to fungi. (Butterfield, 2009; Xiao, 2009).

The Ediacaran fauna is an assemblage of organisms named after the Ediacara hills in Australia where they were first found. Ediacaran fossils are known from more than 30 countries and all continents except Antarctica and South America (De, 2005; McCall, 2006).Several thousand specimens, comprising more than 270 species, have been described from the Ediacaran fauna and many have yet to be described (Fedonkin, 1990; Minnerop, 2000; Waggoner, 1998; Shen, 2008). The first Ediacaran animal was described in 1872 followed by a second find in 1908-14 (McCall, 2006).

How significant are these dates? Until recently, it was thought that a diversity of complex animals appeared suddenly in the "Cambrian explosion" starting about 545 million years ago. We now know that animals existed for at least 60 million years prior to this and perhaps as many as 600 million years prior to the Cambrian. Sixty million years may not seem like such a long time given the vast expanses of time in the Precambrian, but a great deal of animal evolution can occur in such a period. It took about sixty million years for rhipidistian fish to evolve into the first amphibians and about 60 million years for the subsequent diversification of these amphibians into a variety of lineages including the first reptiles. A sixty million year period starting at the end of the Permian would include two mass extinctions. It would begin with a world dominated by synapsid reptiles and primitive archosaurs end in the Jurassic with its diverse lineages of dinosaurs, pterosaurs, and marine reptiles. In about sixty million years, the primitive mammals which survived the extinction of the dinosaurs radiated into the diverse fossil and living groups of the Cenozoic. 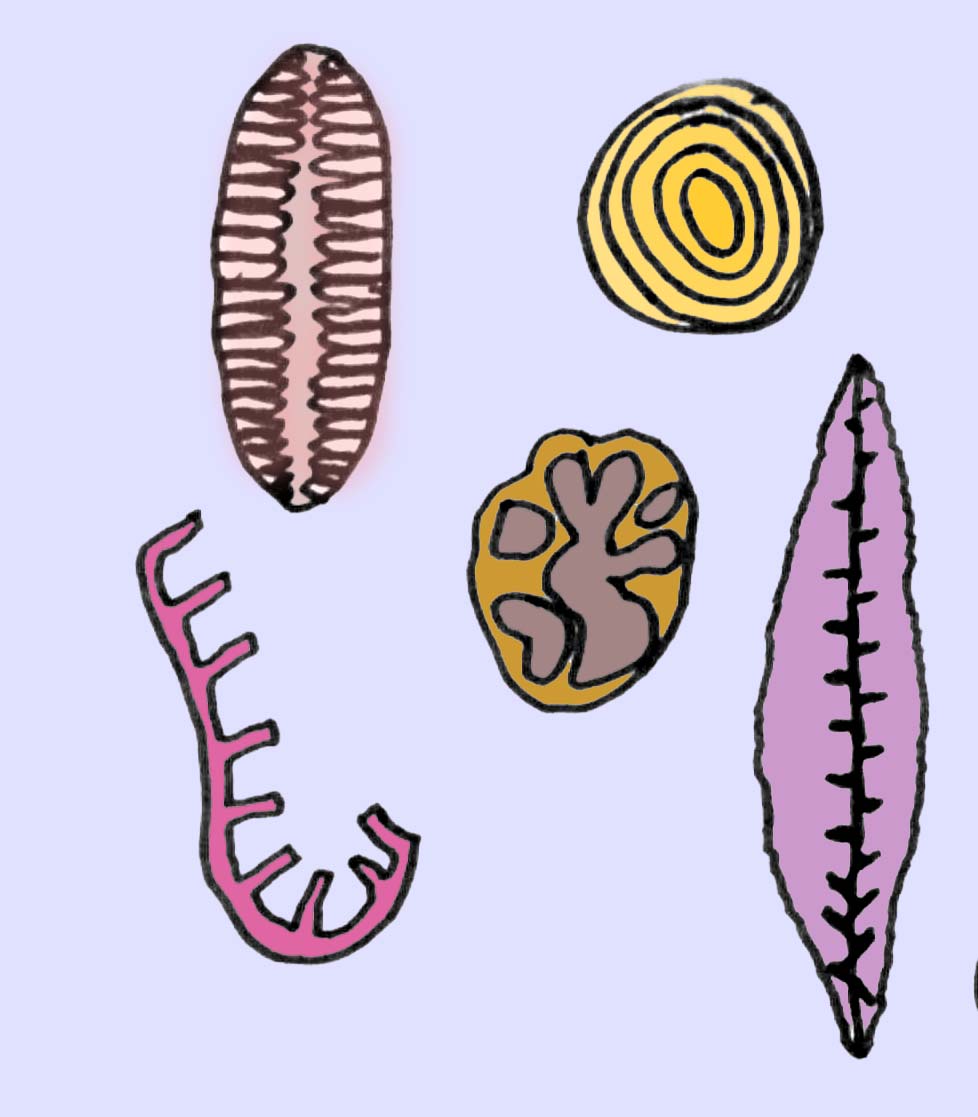 2) THEY ARE SIMPLE ANIMALS

Most Ediacaran organisms are under an inch in size but some are several feet long. They are odd and most are very different from anything alive today (many refer to them as the group Vendobionta). Virtually all have no heads or tails, insides/outsides, fronts/backs, teeth, or eyes. Most have no obvious circulatory, nervous, or digestive systems or internal organs of any kind. Most are very thin and flat--a condition which would be essential for animals without circulatory, respiratory, digestive, or excretory systems. Some sites have a diversity of animals, with as many as 30 different taxa (Buss, 1994).

What are they? There has been a diversity of opinions concerning these organisms in the past: some classified them as plants (the conclusion as of World War I), very large single celled organisms, unique lichens, a completely extinct set of animals, and a group of animals which include the ancestors of modern animals. Originally it was thought that they went extinct long before the rise of modern animal groups, now it is obvious that some groups survived into Cambrian.Some may represent fossils of non-metazoan animals (Droser, 2006). The density of individuals of the discoidal animal Aspidella indicate that the biomass of bottom-dwelling animals in the Precambrian could have approached that observed in modern communities (Gehling, 2000).

Many of the pre-Ediacaran fossils represent simple multicellular colonies of bacteria, eukaryotic algae (including green and red algae), and forms which bear resemblances to fungi. Some Neoproterozoic fossils have been interpreted as the spicules and larvae of sponges (Butterfield, 2009).

Sponges, which are one of the kinds of simplest animals, have been identified from Ediacaran sediments (such as the genus Palaeophragmodictya) which are similar to some Paleozoic sponges. These sponges could measure 1.5-10 cm in diameter (Gehling, 1996; Kerr, 1998a). Sponge spicules are present in Ediacaran rocks (Xiao, 2000).

Some Ediacaran fossils have been interpreted as fungi and basal animals more primitive than sponges (Xiao, 2009). 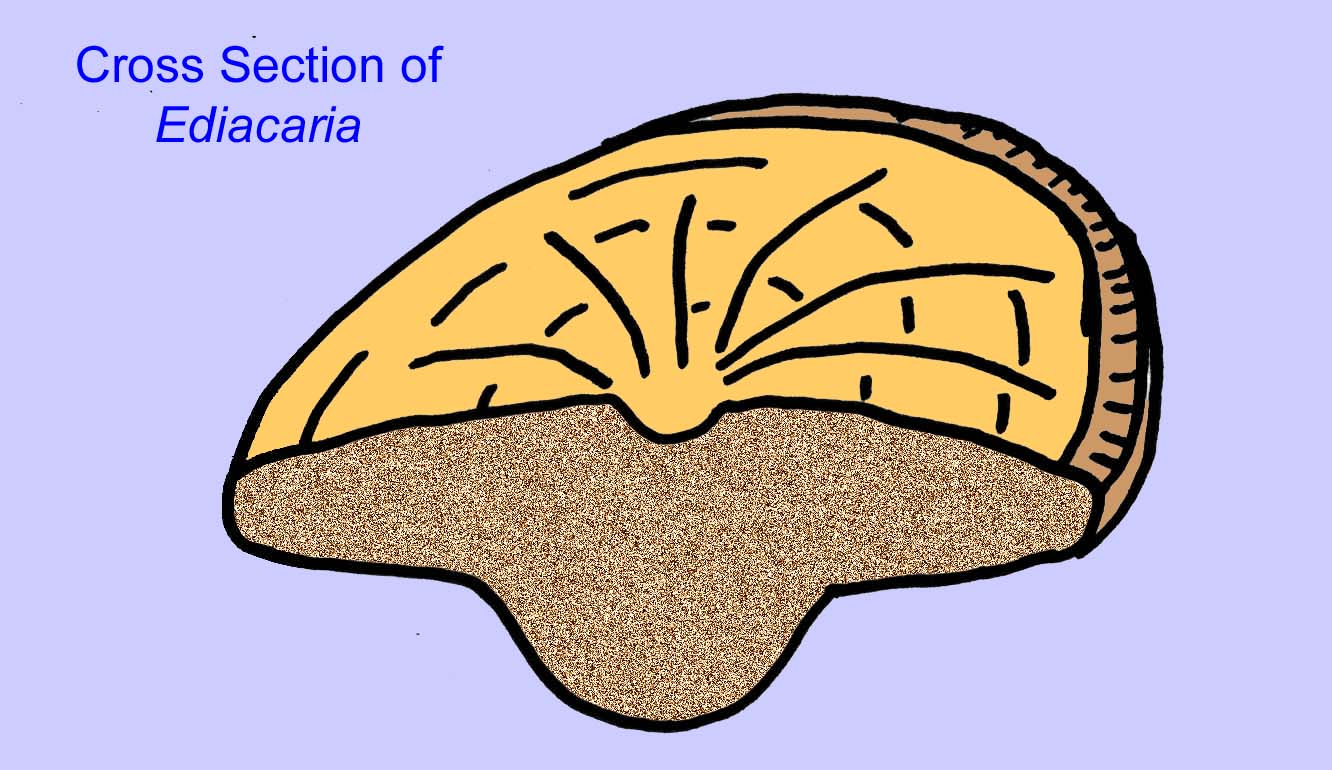 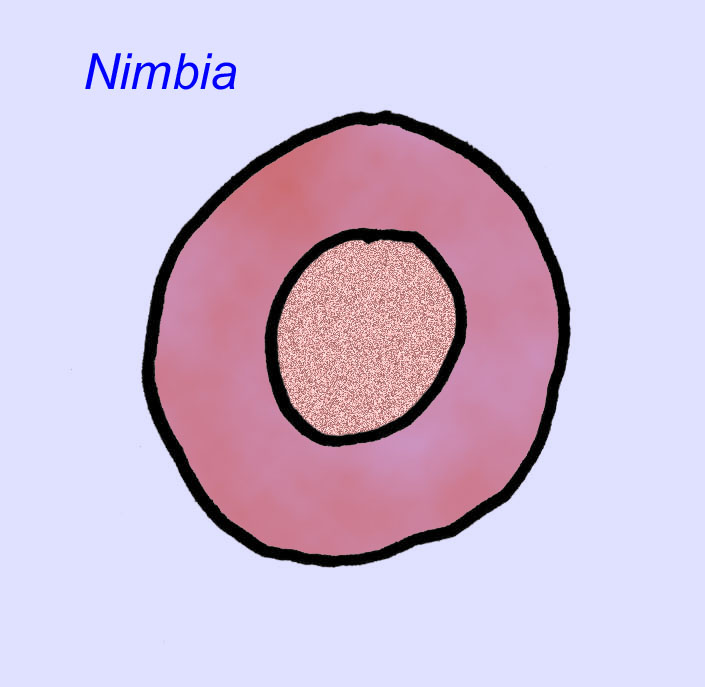 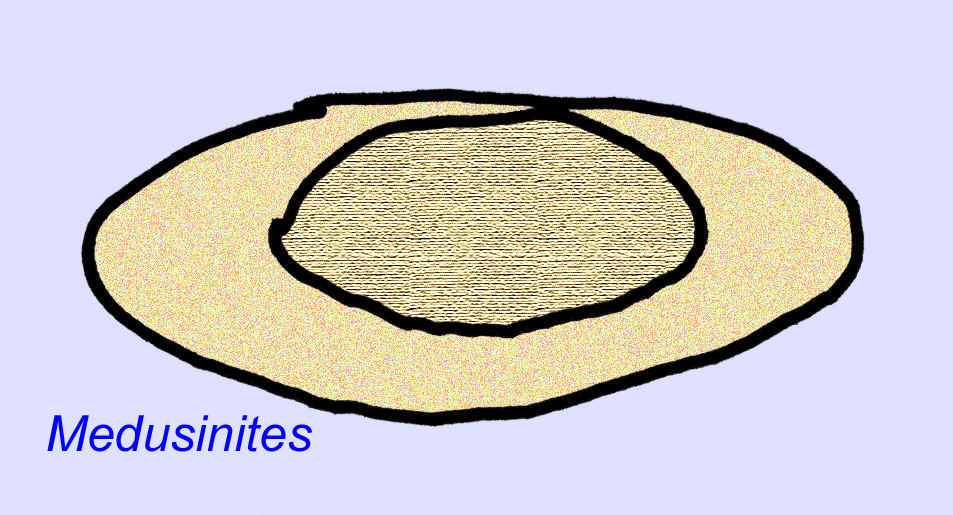 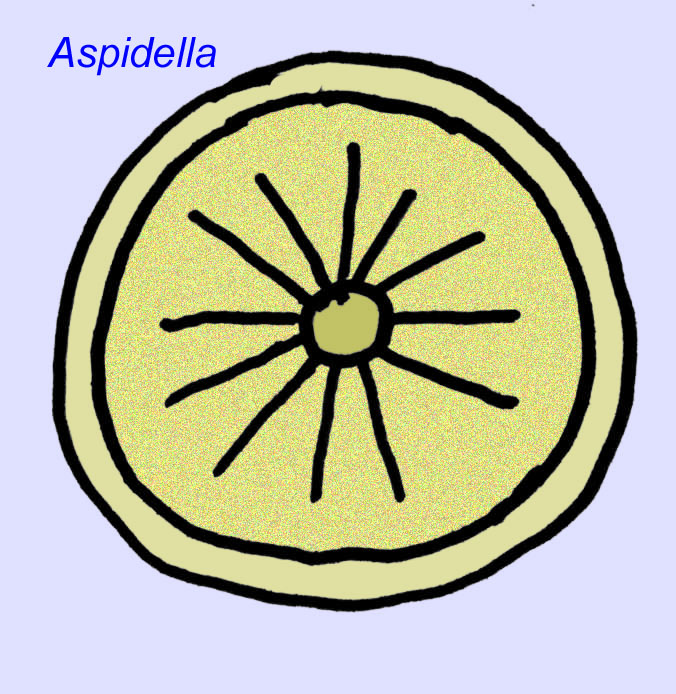 There is a general consensus that many Ediacaran fossils should be classified as early cnidarians, a group of animals which include the modern jellyfish, sea pens, and sea fans. Some forms (such as Ediacaria and Nimbia) are radially symmetrical and superficially similar to cnidarians but lack any sign of a mouth which may be a reason to exclude them from this group. (It is not certain whether the first cnidarians would have had mouths as all later forms do.) Others, such as Albumares brunsae, possess a gastrovascular system similar to that of cnidarians (Lipps, 1992; Sokolov, 1985). Many have a central discoidal structure on one side of their flat, round bodies (Crimes, 1995; Bertrand-Sarfati, 1995). Some Ediacaran animals (Spriggina, Parvancorina, and Praecambridium) have distinctions between their upper and lower (posterior and anterior) sides. Some, such as Ediacaria, had radial lines and peripheral thickening (Crimes, 1995). Some of the Ediacaran cnidarians have been classified as a separate but extinct subclass (McCall, 2006). 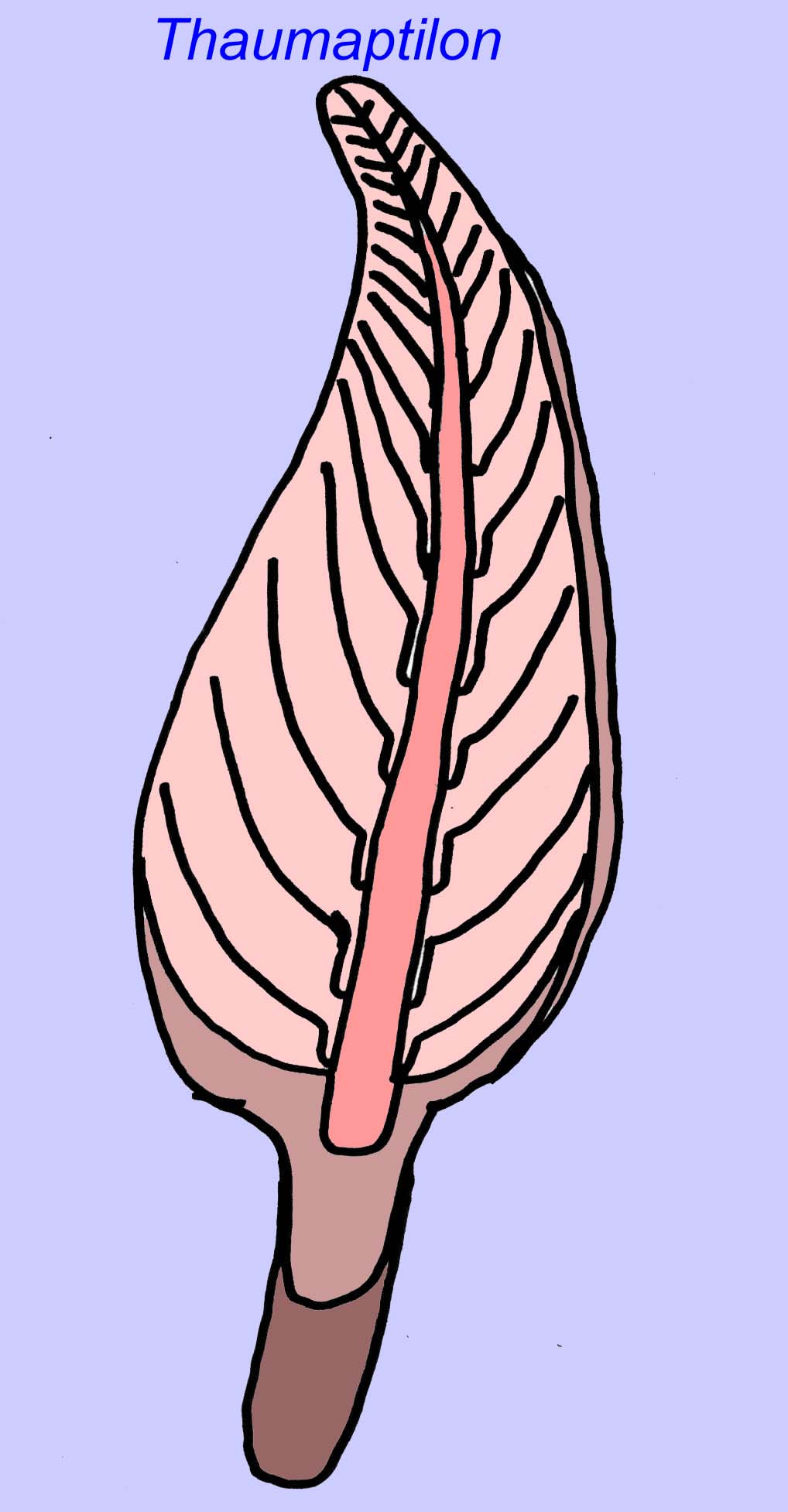 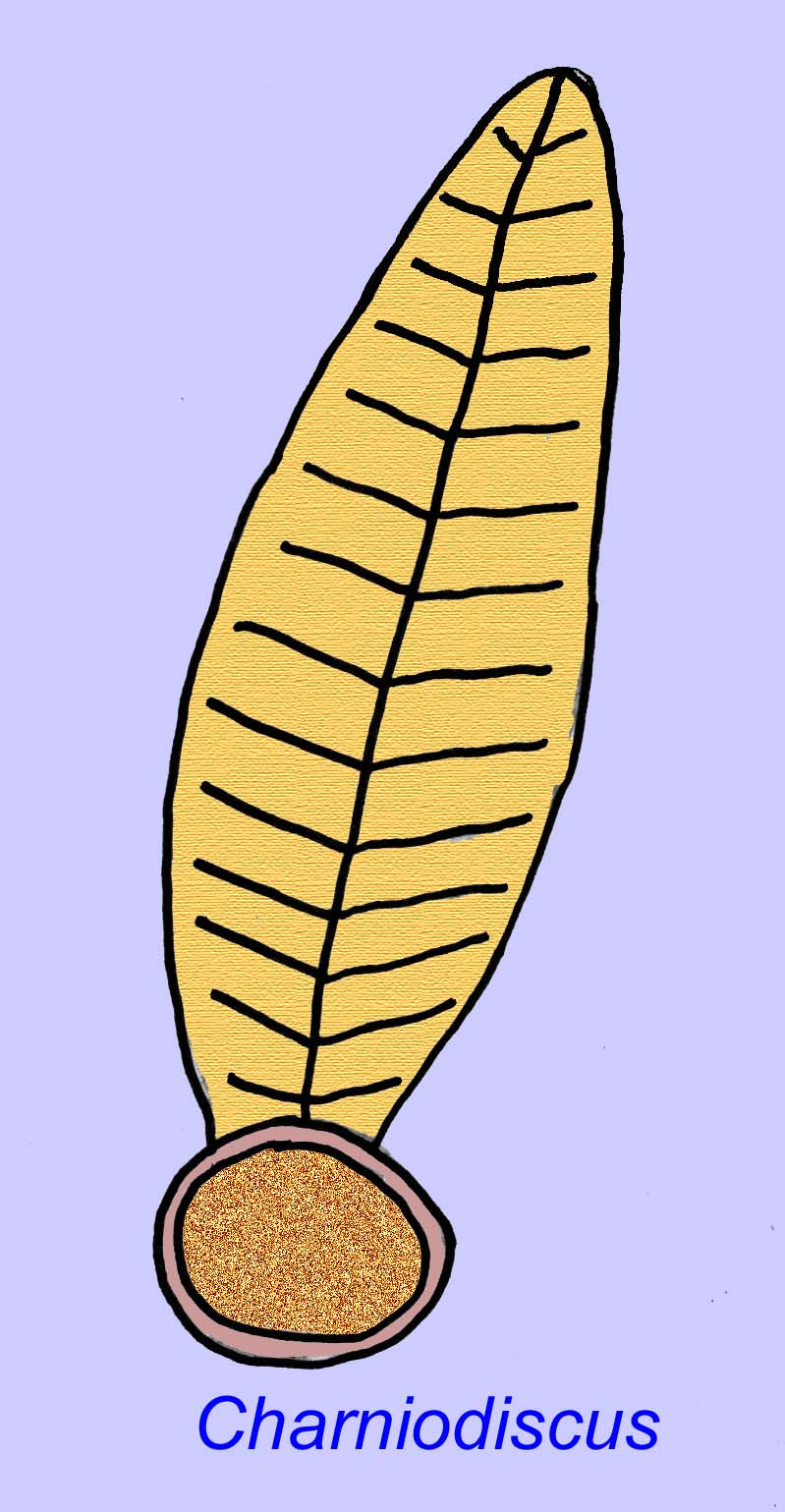 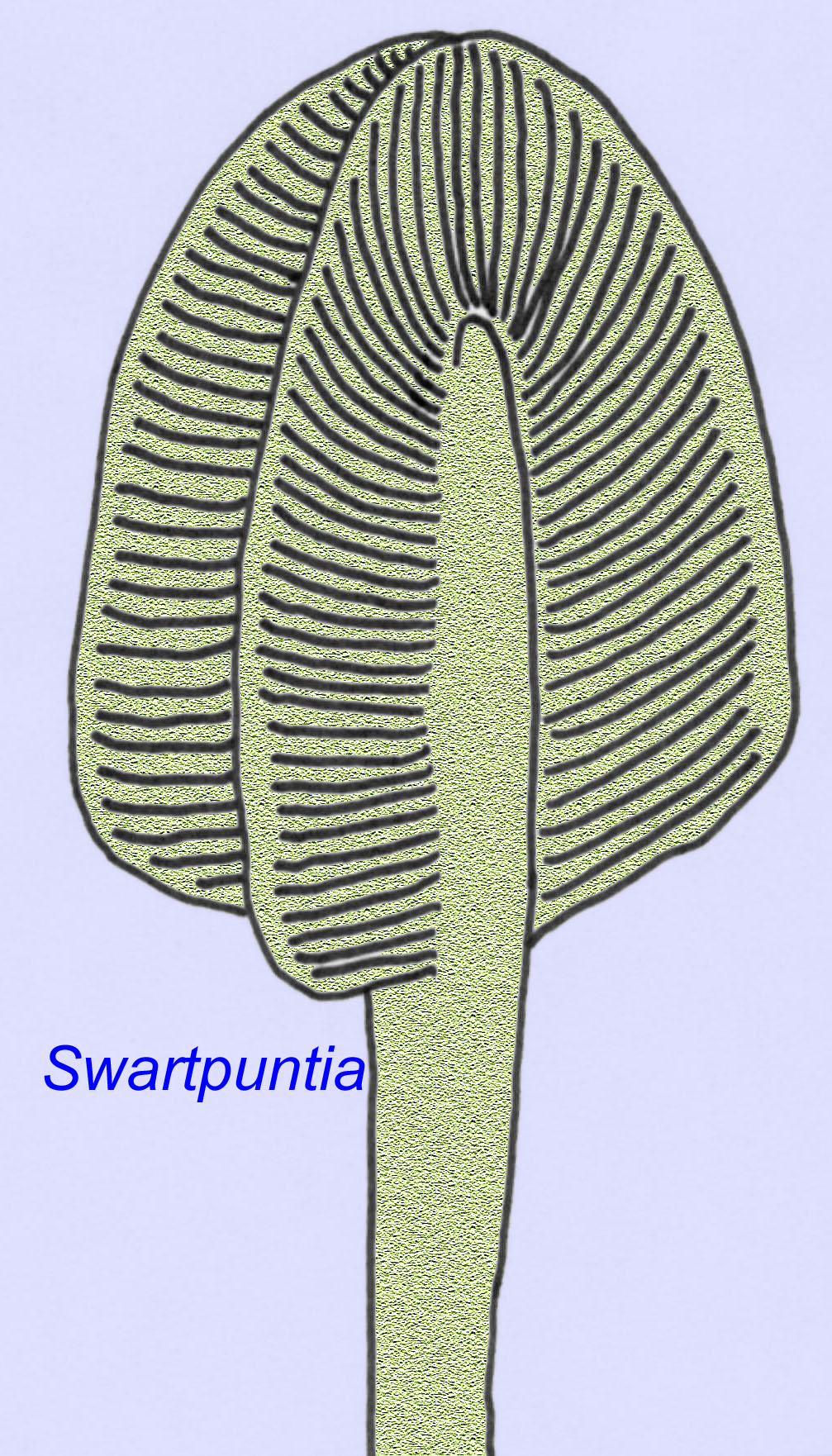 While these animals lacked a mineralized skeleton, most or even all (such as Cyclomedusa and Ernietta) did possess some type of rigid skeleton which was able to make an impression in mud. The type of tissue which composed the internal skeleton is not known (Crimes, 1995; Dzik, 1999).

Mackenzia also seems to be a cnidarian (even if not, it is almost certainly a metazoan animal). There is indirect evidence of food boluses in a digestive cavity and of musculature (Morris, 1993a). Sinocyclocyclicus may be a basal cnidarian (or even a basal metazoan) whose apical budding is similar to that of some cnidarians (such as tabulate corals) (Xiao, 2000). Inaria was a cnidarian of the class Anthozoa with a mouth rim, a pharynx, and a chamber which may have hosted photosynthesizing organisms as found in many modern corals (McMenaman, 1990, Gehling, 1988).

Thaumaptilon was a frond-like animal which seems related to modern sea pens. It would have fed on particulate debris and used a holdfast to secure itself to the bottom (Morris, 1993a; 1993b). The frond of Charniodiscus could reach a length of 1.2 meters (Sokolov, 1990).

One specimen of Charnodiscus measured 1.2 meters in length.

The microscopic anatomy of Swartpuntia is very similar to that of Dickinsonia, an early worm (Narbonne, 1997; McCall, 2006). Fossilized embryos which seem to belong to bilateran animals are known from 570 million years ago (Xiao, 1998). 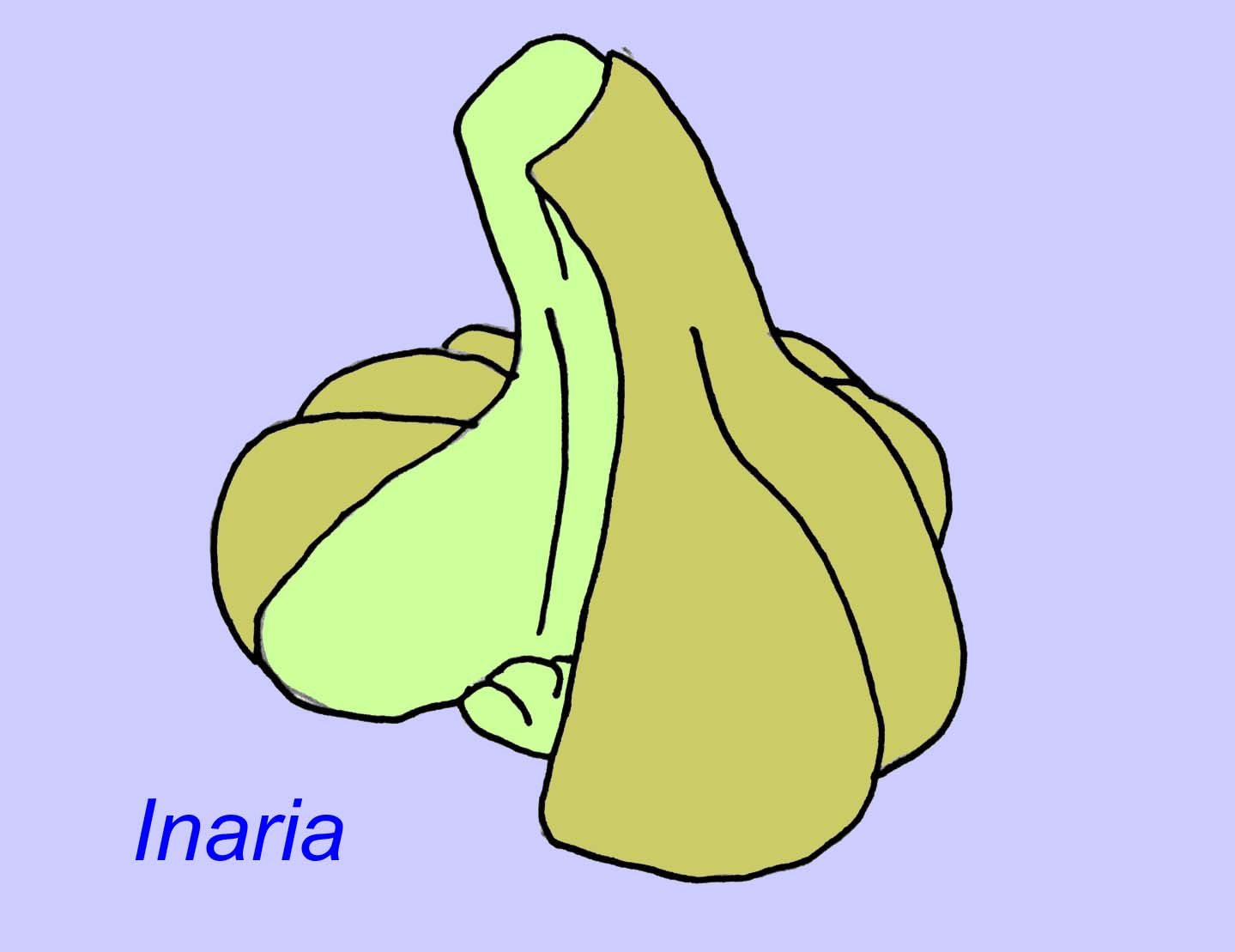 Ediacaran worms are known from Asia, Europe, Africa, Australia, and North America (McCall, 2006). A number of Ediacaran animals were tubular such as Archaeichnium, Cloudina, Corumbella, and Onuphionella. While Onuphionella has been compared to annelid worms, Corumbella was compared to the tubes built by the polyps of some cnidarians. While Archaeichnium was flexible, Cloudina was covered by a mineralized skeleton. Some Cloudina tubes (maximum length under 4 cm) were annulated and others were smooth although this may reflect differences in preservation (Hagadorn, 2000). Cloudina has the first known animal with a mineralized skeleton and 3% of the specimens have holes bored into them indicative of predation. It may be that this predation encouraged the harder structures typical of so many of the Cambrian animals (Bengston, 1992). Cloudina is known from the Precambrian of South America, Europe, the Middle East, and Southeast Asia and relatives are known from the Early Cambrian (before the spread of trilobites) in North America (Grant, 1990). Cloudina fossils are known from at least 6 million years prior to the start of the Cambrian Period (Condon, 2005).

In addition to the two recognized species of Cloudina, a number of other fossil species possessed calcified shells in the Late Precambrian (McCall, 2006). Cloudina, Namacalanthus, and Conotubus are skeletonized Precambrian animals which are also known in the early Cambrian (Shu, 2008).

A number of worms such as Paleolina evenkiana and Planolites beverlyensis have been found at the end of the Proterozoic and into the Cambrian period. Planolites fossils are 1-2 mm wide and 5 to 13 mm long (Bartley, 1998). Unsegmented fossils such as Protechirus, Platypholina, and Vladimissa are not well understood. Some of the fossils are segmented such as Dickinsonia which is classified as an annelid worm. The smallest specimens of Dickinsonia are 4 mm in diameter while the largest are 1 meter long. Despite the length of these worms, they were very thin under 3 mm. Evidence suggests that the amount of oxygen in the atmosphere at the end of the Precambrian was only about one tenth its current concentration and the extreme thinness (and thus large surface area) of these worms may have been an adaptation for oxygen diffusion. These worms were common and widespread. They fed on debris on the ocean floor, given the sediment which often filled their gut (Runnegar, 1982). The simple nature of Dickinsonia may indicate that it is a cnidarian rather than a bilateran (Brasier, 2008).

A large Ediacran animal named Epibaion axiferus has left impressions reacing up to 4.3 meters by .15 meters (with a second specimen measuring 2.5 meters by .35 meters) (Ivantsov, 2002). 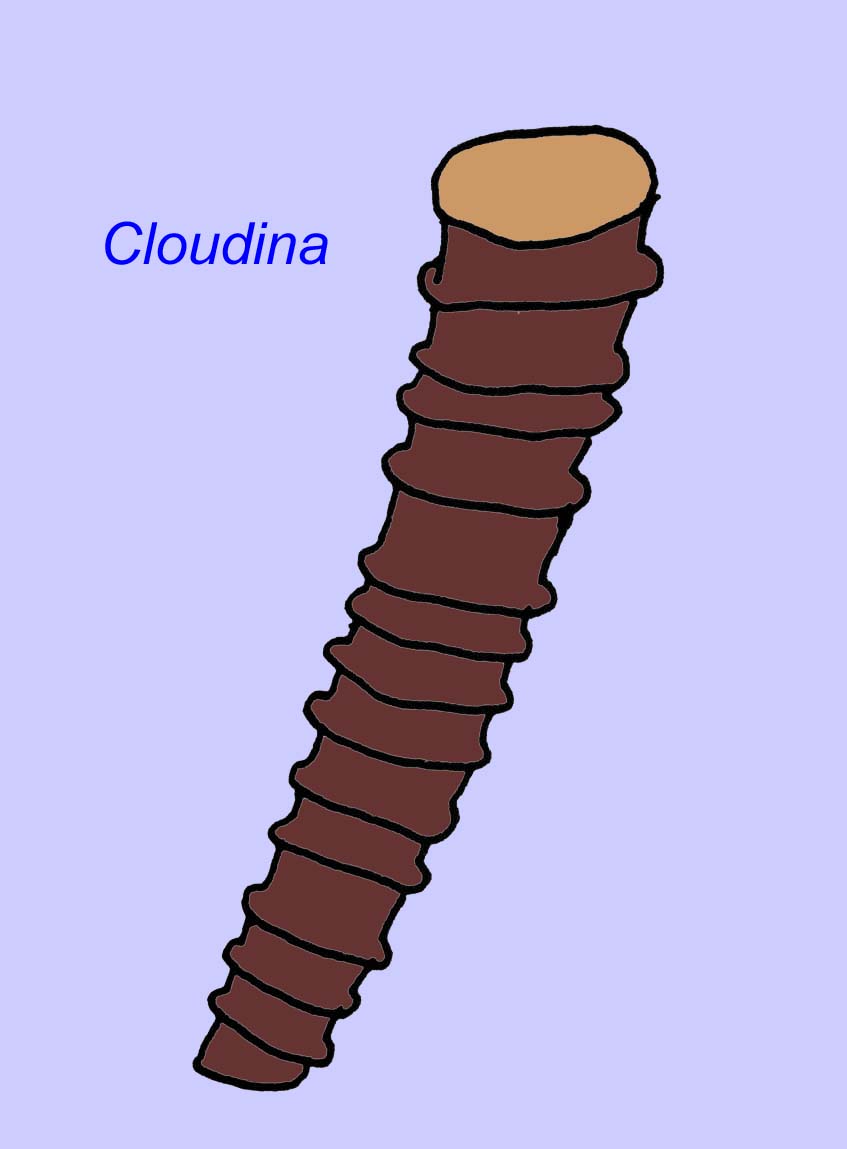 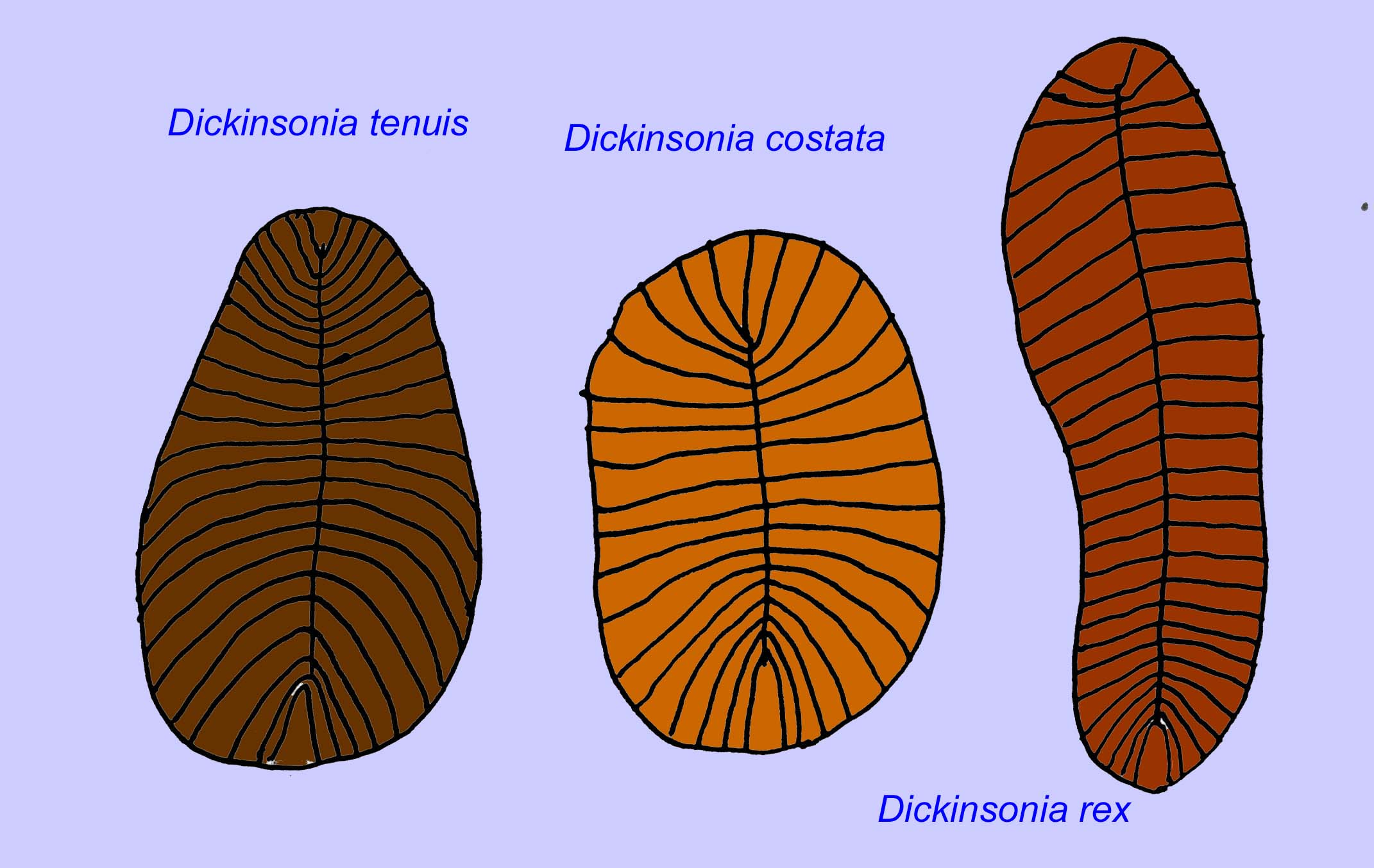 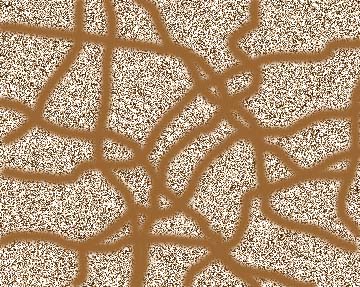 Anabaritids are shelled fossils of the early Cambrian. Some, such as Anabarites may date to the end of the Precambrian (McMenamin, 1990).

Trace fossils of worm burrows have been found in a number of Proterozoic sites. These burrows were made by worms more advanced than flatworms. (Bartley, 1998, Narbonne, 1997, Hagadorn, 1998, McMenamin, 1996). Some modern cnidarians can form simple burrows and it is possible that some of the burrow trace fossils were formed by cnidarians rather than bilaterans (Jensen, 2005).  Some worm burrows are complete with droppings this implies a digestive system like that found in more advanced worms (Morris, 1993a; Valentine 1994). Fossils of worm embryos have been found from the Earliest Cambrian (Bengston, 1997). 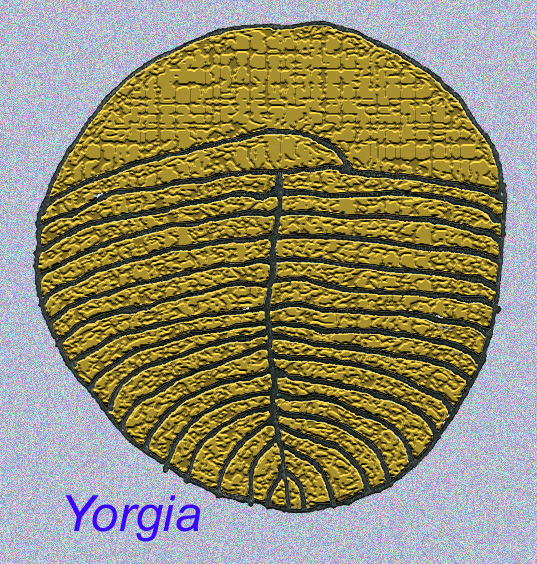 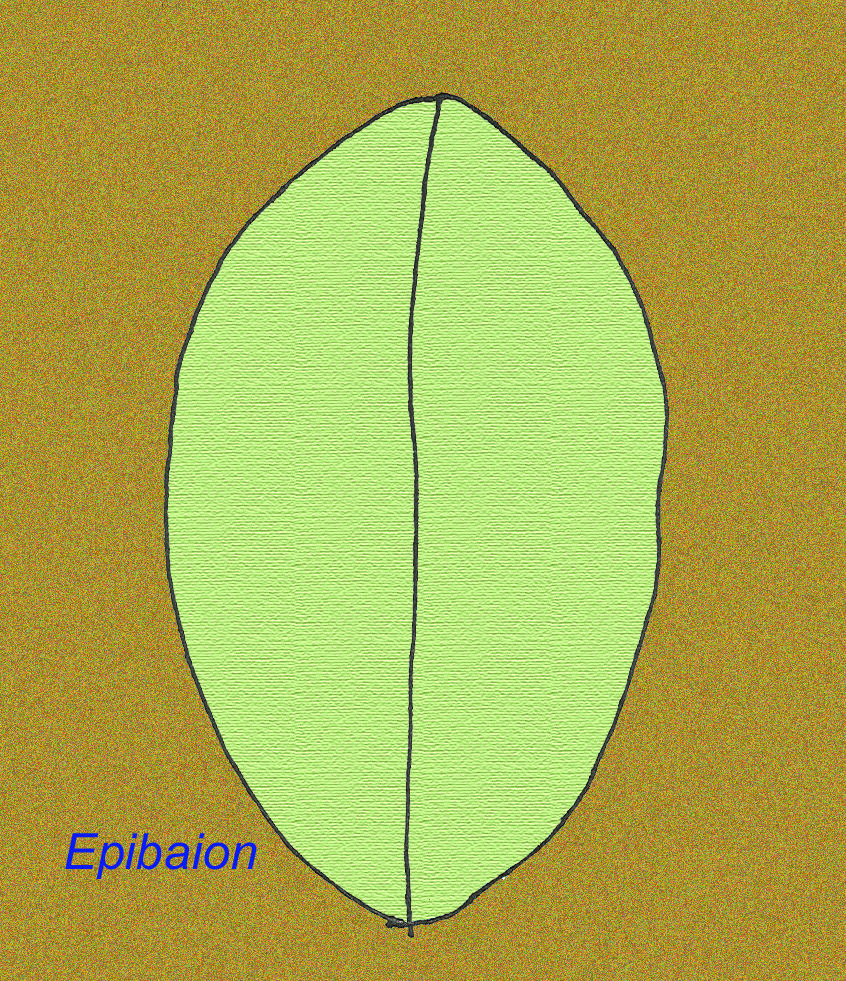 ARE THERE ANIMALS MORE ADVANCED THAN WORMS AMONG THE EDIACARAN FAUNA?

Some genetic analyses have suggested that the separation of the major groups of coelomate animals occurred before the Cambrian (Gu, 1998). A number of Ediacaran fossils have been classified in coelomate groups, providing support for this conclusion. Arkurua has similarities to the echinoderms with its 5-branched symmetry and its similarities to primitive echinoderms of the Cambrian (the edrioasteroids). Perhaps the 5 structures are feeding arms leading to a central groove (Gehling, 1987). Two genera (Redkinia and Spriggina) may be close to the base of arthropod lineages. Tribrachidium possessed three appendages on one of its surfaces has been found in Australia and Europe (Wright, 1997b; McCall, 2006). Some of the Ediacaran fauna had a body plan which was triradial (Tribrachidium, Ventagyrus), tetraradial (Conomedusies), and octaradial (Eoandromeda). Some have interpreted these as extinct lineages of cnidarians (Xiao, 2009). 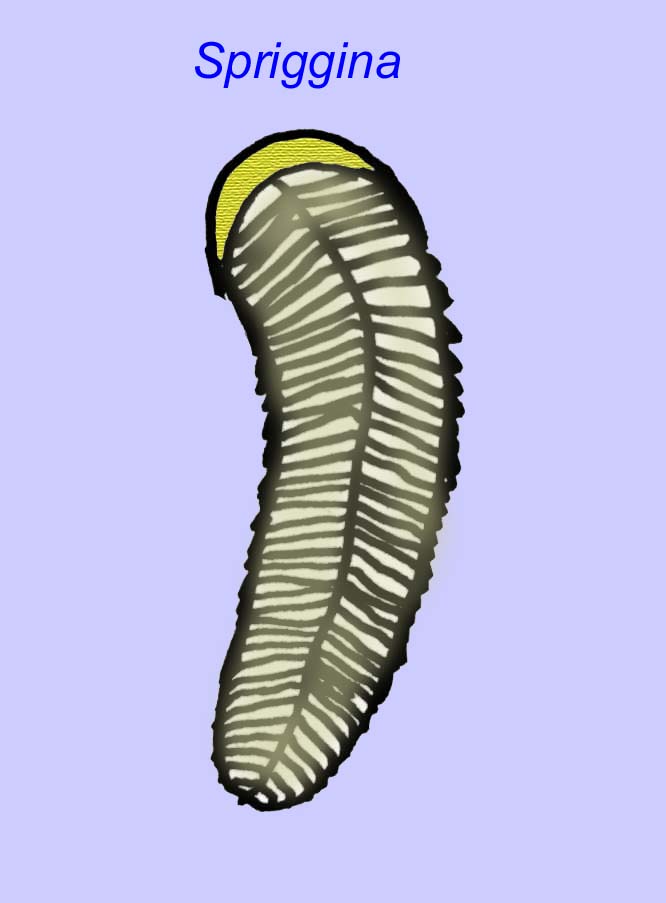 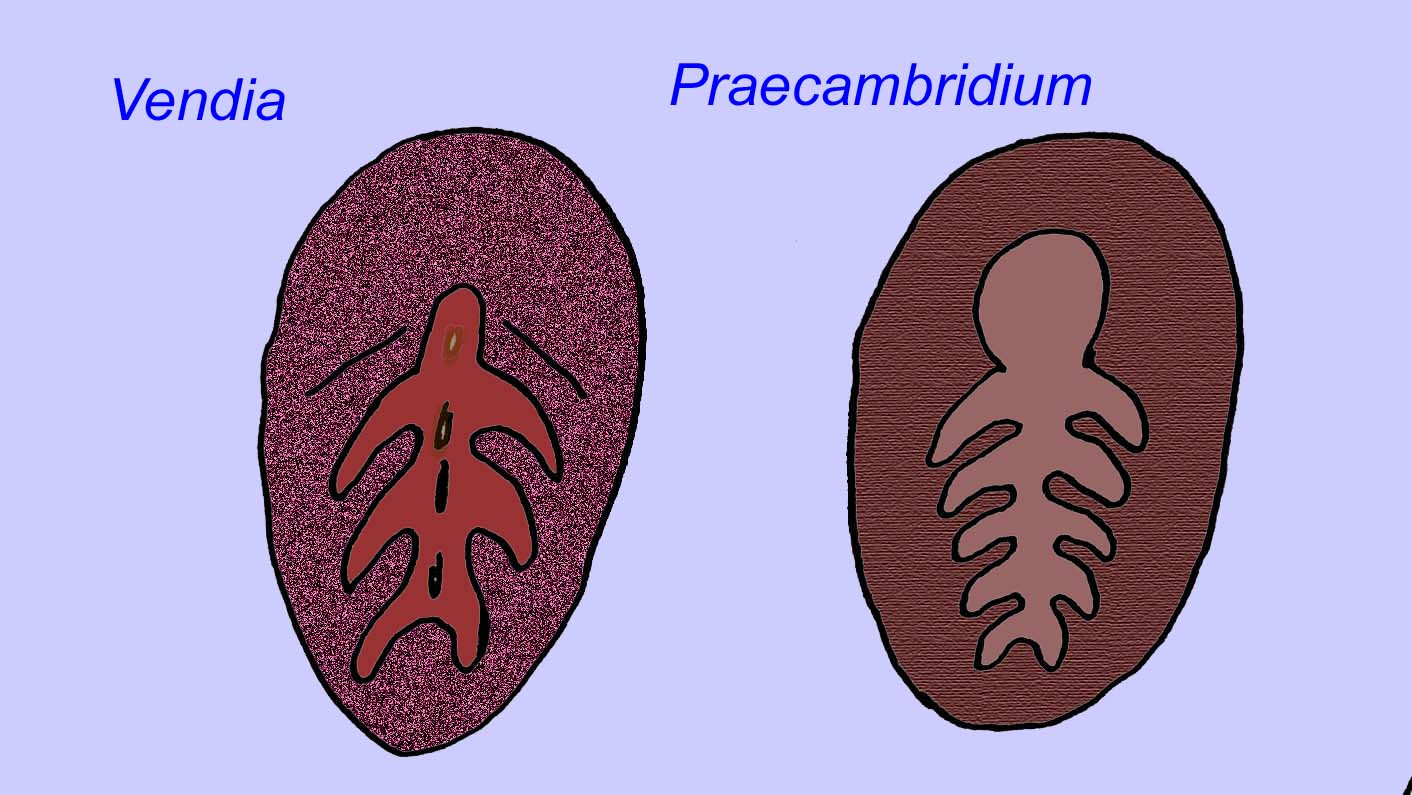 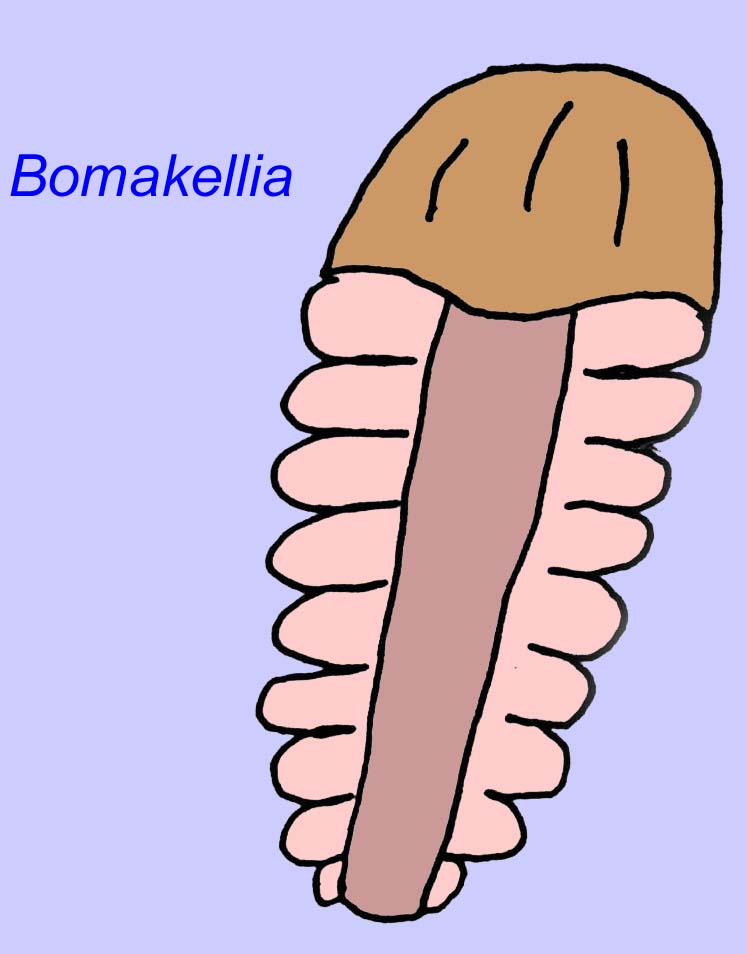 The Ediacaran fossil Ausia has been classified as a urochordate (Xiao, 2009).

Two species, Phylozoon, and Kimberella (see below), may be relatives of segmented worms (annelids) or mollusks. Kimberella has bilateral symmetry and a possible gut (Fedonkin, 1997). Kimberella seems to have been a mollusk which lived as rapid swimming marine predator. The holes bored into Cloudina shells have been attributed to Edicaran molluscan predators (McCall, 2006). Fossils of embryos from the late Precambrian formed polar bodies similar to many mollusks (Chen, 2006).

Other fossils may be related to arthropods, some of which (such as Bomakellia) have a structure which has been compared to the head-shield of trilobites (a common type of arthropod of the Paleozoic Era; McCall, 2006). 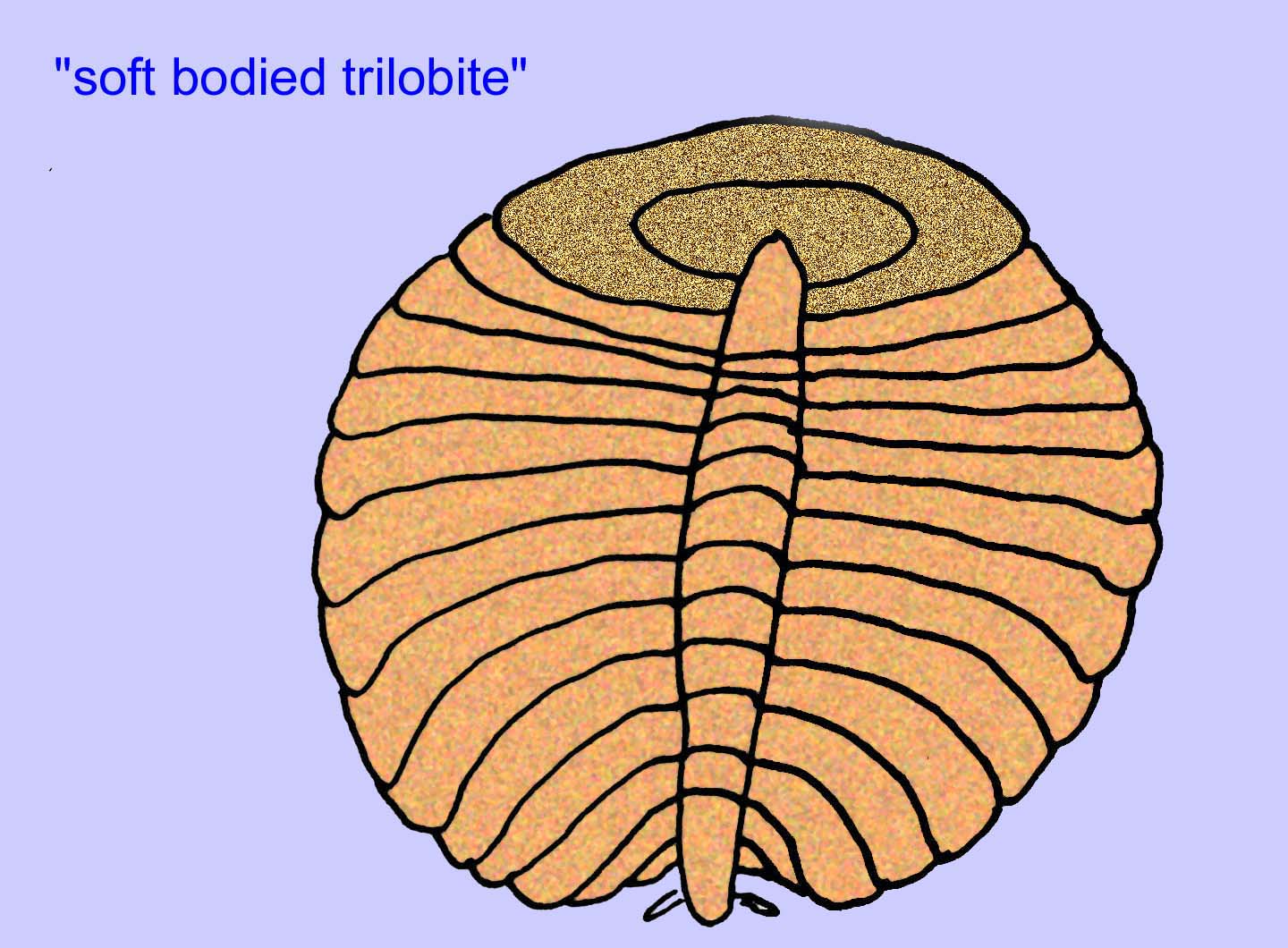 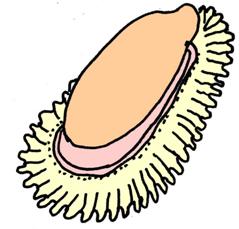 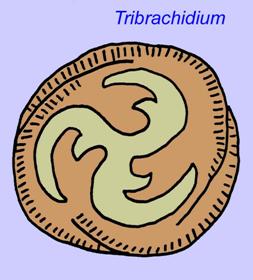 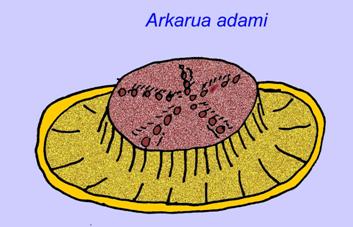