There are two groups of coelomate animals: protostomes and deuterostomes. Although protostomes compose the majority of animals in both fossil and modern communities, most of this course will be spent studying the deuterostomes, especially the vertebrates. The most primitive deuterostomes are the echinoderms and hemichordates. 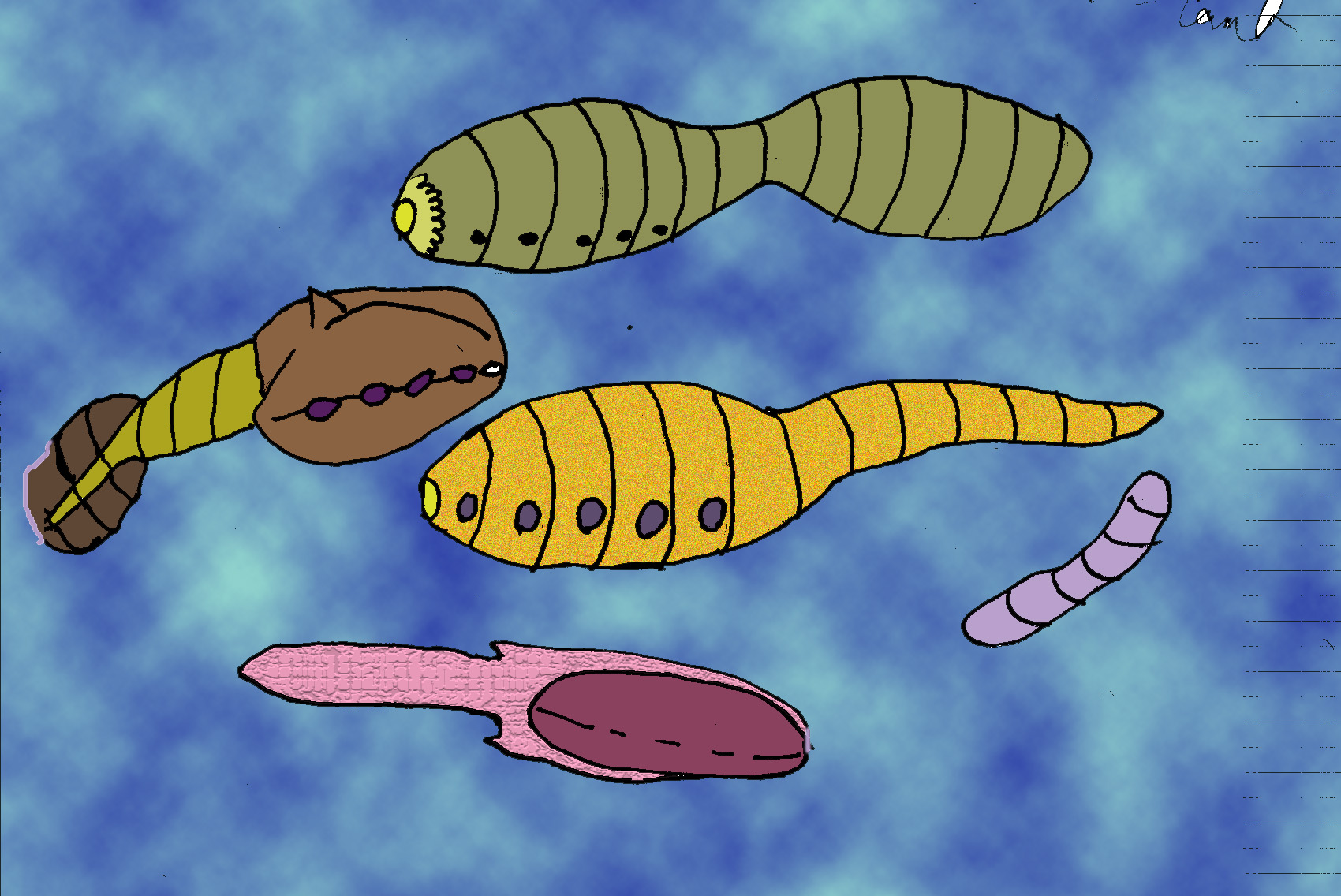 Vetulicolia was originally referred to as a “strange arthropod” but was reclassified as a deuterostome. This specimen and Pomatrum are the basis of a new phylum, Vetulicolia. They seem to be basal deuterostomes with gill slits. Vetulicolians possessed a mouth and a series of what have been interpreted as gill slits, suggesting that they were filter feeders.  The region where the front and back parts of their bodies join is constricted.  It was originally proposed as a phylum and some have included early chordates and wormlike animals it its group.  Some have been dated to immediately after the Precambrian-Cambrian transition (Shu, 2008).

Many of the hemichordates and primitive chordates are roughly worm-like in body form. The echinoderms reorganized this general body plan and as a result, their relationship to chordates is not evident in their external appearance. 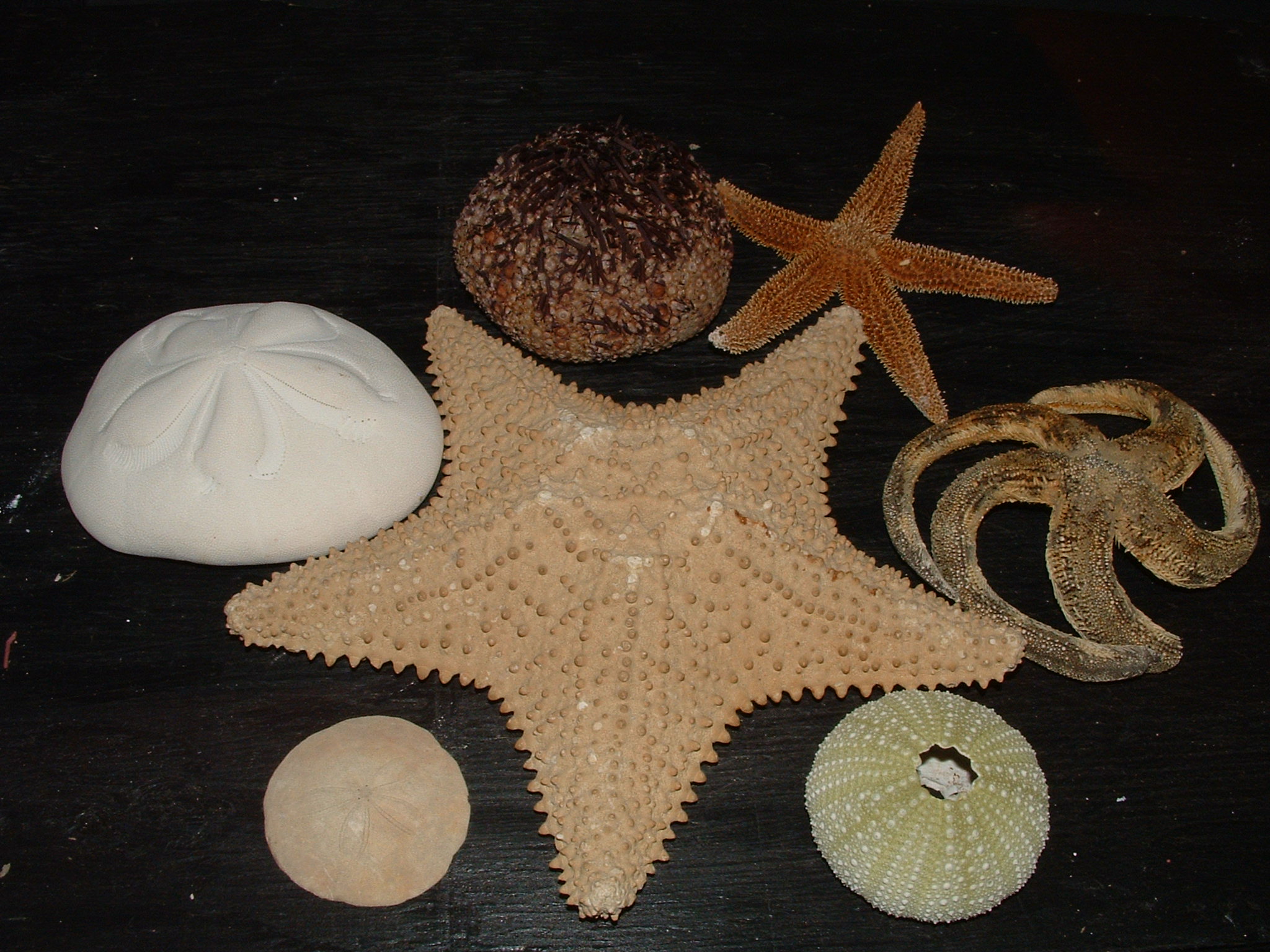 The earliest fossil Cambrian echinoderms are known from 520 million years ago. These early forms were primitive and predate the origin of the lineage which survives today (Bottjer, 2006). After arthropods and mollusks, echinoderms are the 3rd most commonly fossilized phylum. Echinoderms were apparently not abundant nor diverse in the Early Cambrian (Ivantsov, 2005). Over the course of the Cambrian, echinoderms shifted from feeding in substrates which were typical of Precambrian environments (with little bioturbation of microbial mats) to those which were more typical of environments of more recent eras (Dornbos, 2006). Some fossils of the Ediacaran fauna may be related to echinoderms. A diversity of echinoderm groups evolved in the Cambrian and Ordovician; many of which have become extinct. These groups include:

eocrinoids: stalked animals which evolved in the early Cambrian (and were the most diverse echinoderms of the Cambrian) and became extinct in the Siluran. Eocrinoids are known from the Early Cambrian (Zhao, 2007).

paracrinoids--stalked animals known from the Ordovician through the Silurian

blastoids--stalked animals known from the Ordovician through the Permian

cystoids--stalked animals known from the Ordovician through Devonian

helioplacoids-- known from the Cambrian

edrioasteroids--starfish-like animals known from the Cambrian to the Carboniferous

carpoids--known from the Cambrian to Carboniferous

Crinoids were most numerous and diverse of Paleozoic echinoderms. They appear in the Cambrian and survive until recent times. They made up 90% of the echinoderm diversity of late Paleozoic but Permian extinctions wiped out many groups.

brittle stars: first appear in the Ordovician and survive to recent times

starfish: first appear in the Ordovician and survive to recent times

sea cucumbers: first appear in the Cambrian and survive to recent times

sea urchins and sand dollars: first appear in the Ordovician and survive to recent times (Prothero, 1998)

Fossils known as calcichordates and carpoids are probably echinoderms and seem to possess a mix of both chordate (or hemichordate) and echinoderm features (Stach, 2000; (Jeffries, from Ahlberg, 2001).

Below are images and fossils of extinct echinoderms 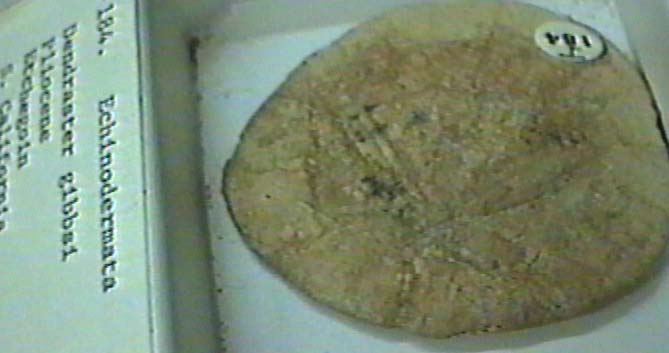 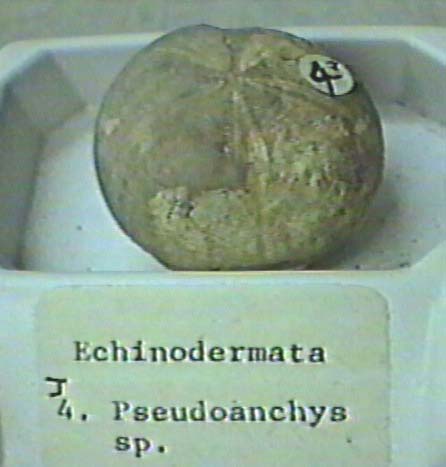 Fossils of discoidal soft-bodied animals are often difficult to classify. Excellent preservation of fine details of disc-shaped fossils from the Cambrian strata in China, Stellostomites eumorphus and Pararotadiscus guizhouensis, has provided support for their affinity with either the lophophorans (because of their intestine and other features) or echinoderms (because of their dendritic tentacles and other features). These fossils are similar to others found throughout the world from the Cambrian (Zhu, 2002). A Mid-Cambrian fossil Coleicarpus is a member of the echinoderm-like Paleozoic group Soluta which are known from the Cambrian to the Devonian. They possess a flexible tail and appendages on the head. Coleicarpus attached to the substrate as an adult, giving it characteristics of both chordates and echinoderms. It probably was a filter feeder, depending on water currents to bring food (Daley, 1996).

Hemichordates lack a chordate feature known as the notochord although they have a rod in the same position, which may be equivalent to the embryonic precursor of the notochord. They have a pharynx with multiple openings, a dorsal nerve cord and a ventral blood vessel. These are all very important characteristics of the chordates (a group which includes the vertebrates). Acorn worms and colonial pterobranchs still exist today. Graptolites were a group of hemichordates that appeared in Cambrian. Although most died out in the Paleozoic, recently modern representatives were identified (it had previously been thought that this group went extinct) (Prothero, 1998).

Yunnanozoon lividum (3 cm) is known from the Chengjiang fauna of China 530 mya. Although it was first classified as a chordate, some feel that a notochord is not present and it should be classified as a hemichordate based on its body structure (proboscis, collar, and a trunk composed of gill and digestive regions), pharynx, branchial arches, and gonads. It may have had segmented muscles homologous to chordates (Chen, 1995; Shu, 1996).

The following photos and drawings are of fossil hemichordates known as graptolites. 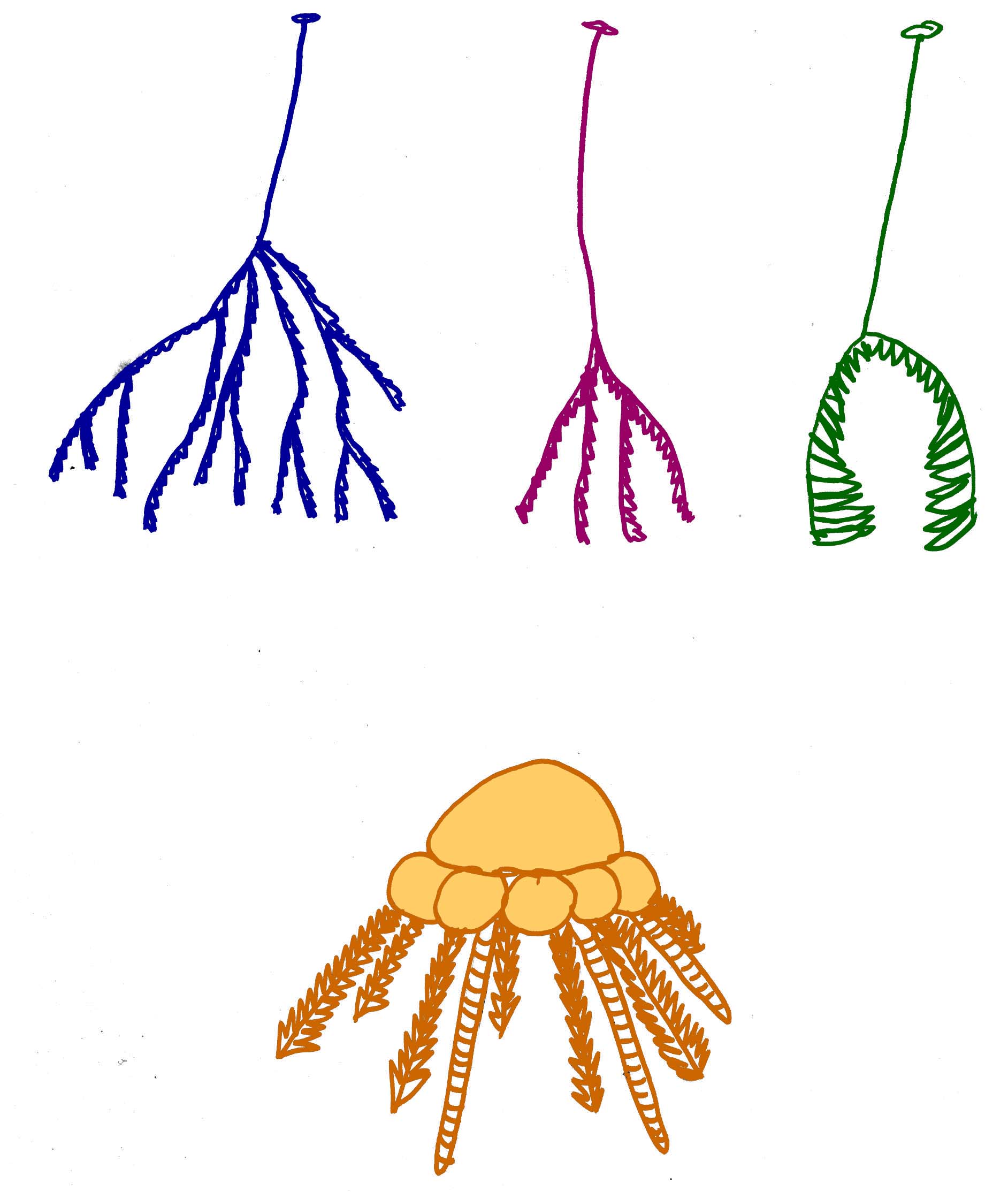 Shankouclava, an early tunicate, is known from the Early Cambrian of China (Chen, 2003). Other fossil urochordates are known from the Ordovician and another unclassified fossil may date from the Siluran (Long, 1995). The Ediacaran fossil Ausia has been classified as a urochordate (Xiao, 2009).

Tunicates are classified as urochordates, the most primitive living chordates. Even though their adults are seemingly unrelated to higher chordates, their larvae (pictured in the following images) possess a notochord. 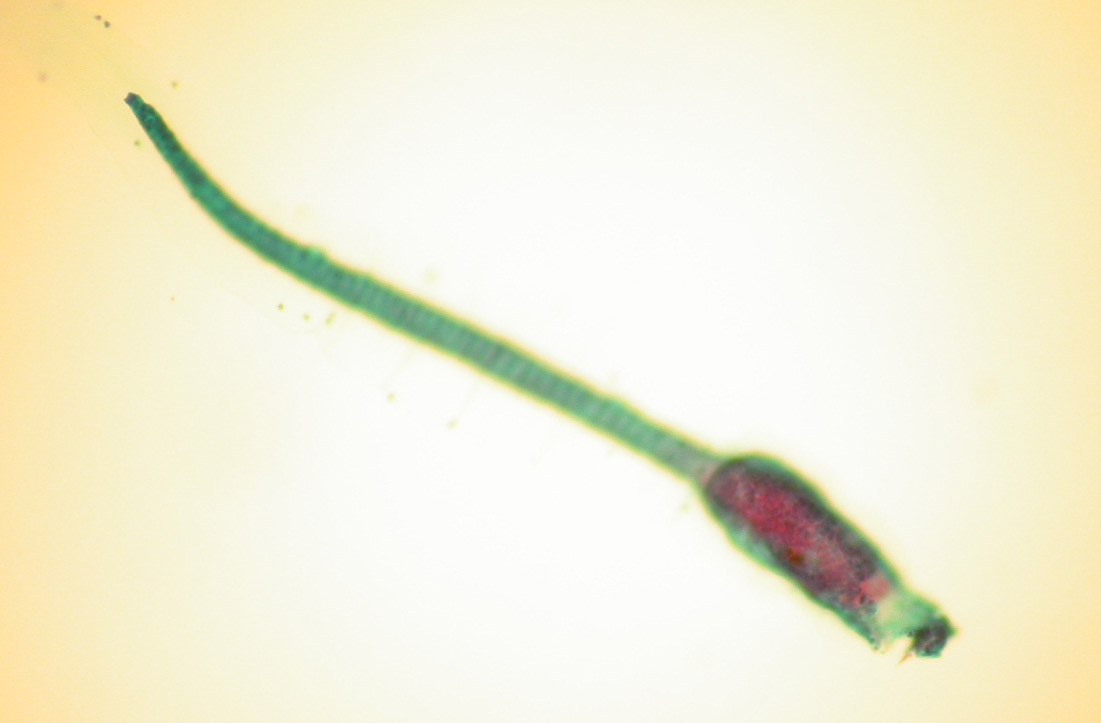 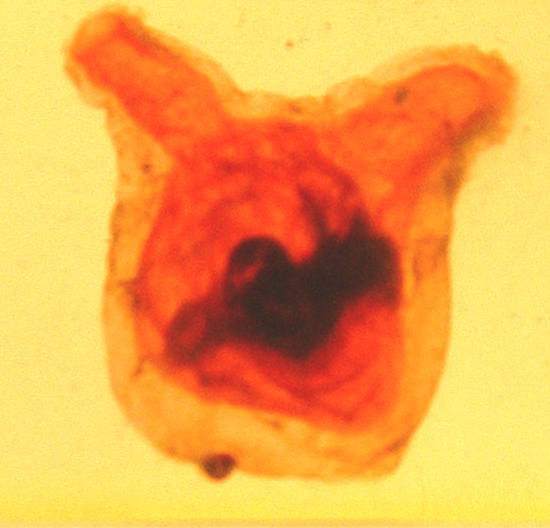