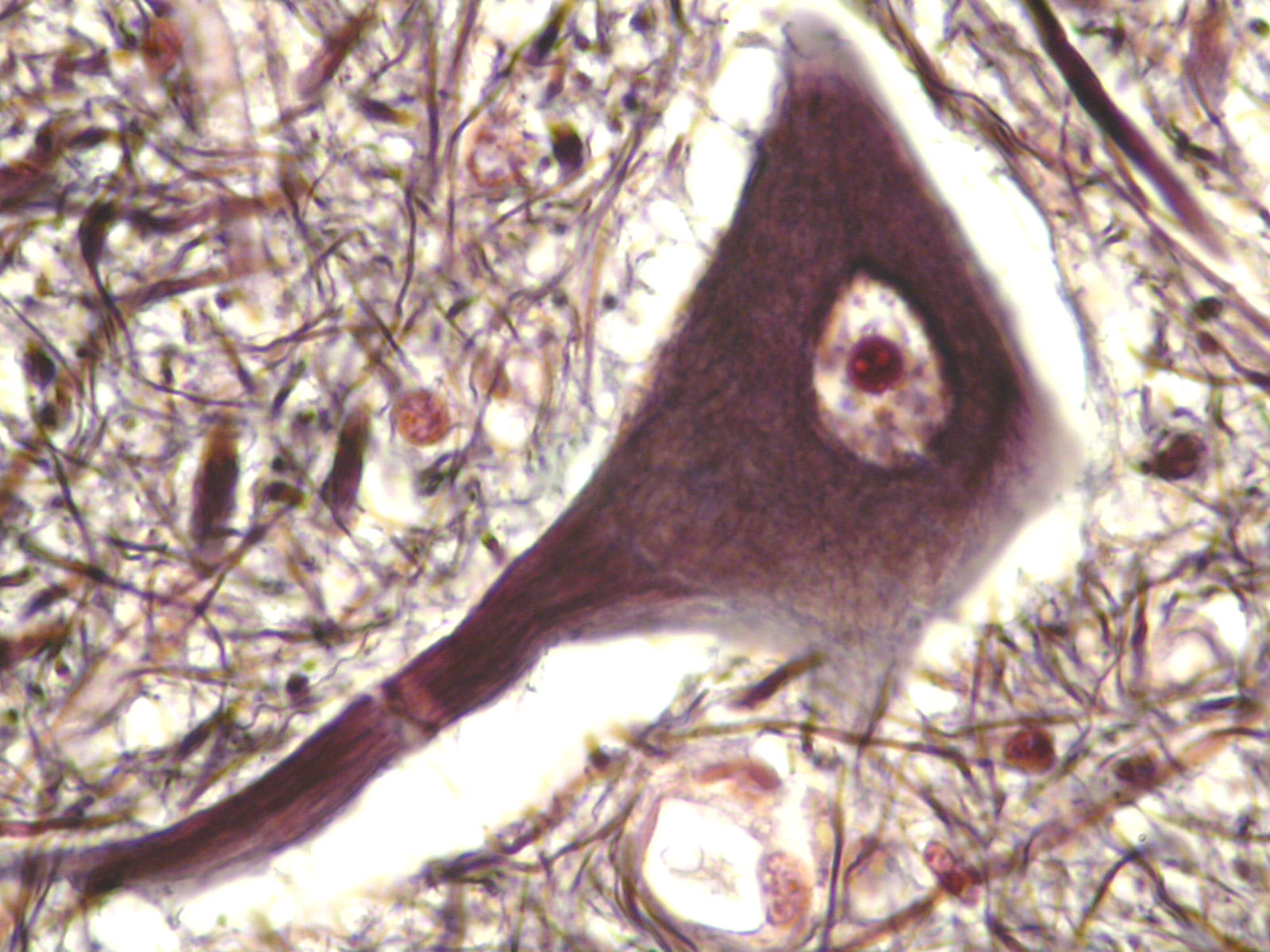 Eukaryotic cells are much more complex than prokaryotic cells. They are larger and possess membrane bound organelles, such as the nucleus, mitochondria, and chloroplasts. The human nerve cell depicted below is a eukaryotic cell.

Eukaryotic cells were common by 1.7 billion years ago (Kerr, 1995).Biological lipids characteristic of cyanobacteria and eukaryotes have been identified in rocks dating 2.7 billion years old. It is possible that cyanobacteria evolved long before oxygen levels in the atmosphere began to rise. If these molecules represent the remains of eukaryotic cell activity, then eukaryotes arose 500 million to a billion years prior to their earliest known fossil remains (Brocks, 1999; Brocks, 2003). Microscopic fossils can be difficult to interpret given that it is difficult to distinguish between prokaryotic and small, unicellular eukaryotic cells (Yoon, 2004). Eukaryotic cells are larger, much more complex & have internal membrane-bound organelles (such as nuclei, mitochondria, chloroplasts). Not only do modern eukaryotic cells compose these protists (mostly unicellular organisms) but are also the type of cell which make up fungi, plants, and animals.

There is a great deal of evidence that supports the theory that mitochondria and chloroplasts are actually the descendents of eubacteria that were engulfed by a proto-eukaryotic cell and survived as endosymbionts (discussed presently). It is possible that the eukaryotic nucleus also resulted from an endosymbiotic event. In such a model, an archaeal cell would have engulfed a eubacterial cell. The origin of the eukaryotic nucleus by endosymbiosis was first suggested in 1910 (Hartman, 2002). Although some feel that the eukaryotic cell formed when an archaeal cell engulfed a eubacterium, the major problem with this model is that no known modern bacteria possesses a flexible cytoskeleton which interacts with the cell membrane to permit phagocytosis. (It should be pointed out, however, that homologs of the proteins which compose the eukaryotic cytoskeleton are known in bacteria). The nucleus is surrounded by a double-membrane, just like all endosymbionts (Hartman, 1984; Hartman, 2002).

One model of the origin of the eukaryotic cell is that an RNA based organism (termed a kronocyte) engulfed a prokaryote which eventually became the nucleus. In this model, a phagocytic kronocyte engulfed an archaea and the plasma membrane of the archaea formed the nuclear membrane. The endosymbiotic event which produced the eukaryotic mitochondria would have occurred afterwards. The resulting cell would have possessed many nuclear genes having been derived from the archaeal chromosome, some resulting from the transfer of mitochondrial (eubacterial) genes to the nucleus, and some from the original kronocyte.

ENDOSYMBIOSIS AND THE ORIGIN OF MITOCHONDRIA AND CHLOROPLASTS

Not only are there a number of endosymbionts which have evolved recently and still retain most of their ancestral nature, there is also evidence of more ancient endosymbiotic events, including those which resulted the mitochondria and chloroplasts of eukaryotic cells. Mitochondria and chloroplasts are eukaryotic organelles which have a number of features which suggest they are derived from eubacterial ancestors. They are similar in size to bacteria and they possess their own chromosomes which are circular, like those of bacteria. (As a result, it is incorrect to say that human cells have 46 chromosomes: the mitochondrial chromosome composes a 47th and it may be present in many copies in any given cell.) Mitochondria and chloroplasts are also similar to bacteria in their ribosomes, cytochrome c, genetic code, translation initiation, translation initiation factors, and internal structure. Both mitochondria and chloroplasts reproduce by fission as do bacteria and cannot be synthesized by the genes in the nucleus. If they are removed from a cell, the cell cannot replace them (Gray, 1992; Margulis, 1996).

Both mitochondria and chloroplasts are sensitive to antibiotics which affect bacteria such as streptomycin, spectinomycin, neomycin, & chloramphenicol while are unaffected by agents such as cyclohexamide that affect the cytoplasm. Many of these antibiotics act on bacterial ribosomes. However, eukaryotic mitochondria possess their own genes which contribute to ribosomes. There are two rRNAs encoded by the mitochondrial genome: MTRNR1 (nucleotides 648-1601) and MTRNR2 (nucleotides 1671-32229). Not only are high doses of certain antibiotics potentially dangerous to all humans (because they inhibit mitochondria in addition to inhibiting bacteria) some people possess variations in these mitochondrial rRNA genes which make their mitochondria more bacteria-like and thus can cause serious reactions if they take an antibiotic (OMIM).

Microfossils (fossils of microscopic organisms) are abundant in many sediments. The major interest in microfossils (micropaleontology) is for stratigraphy, especially for identifying strata where oil might be found. Even after the decline in oil production, the majority of working paleontologists are still stratigraphic micropaleontologists. More paleontologists specialize in the microscopic foraminiferans than in the fossils of any other group of organisms. A number of different types of microorganisms can be present as fossils, especially those that make shells listed below.

Foraminiferans are amoeba-like microorganisms that have an internal shell, usually made of calcite or aragonite. There are hundreds in a typical liter of seawater, and often more than a million per square meter on sea floor (sand of many tropical beaches composed entirely of their shells). They are very important in aquatic food chains and feed on debris. The earliest are known from the early Cambrian, and became more complex throughout the Paleozoic.They are the most important type of index fossil of late Paleozoic for stratigraphy. There are over 6000 species can be correlated across the continents with zones that last only 2-3 million years. There is a mass extinction of foraminiferans at end of Permian. The following images are of modern foraminiferans (Prothero, 1998). 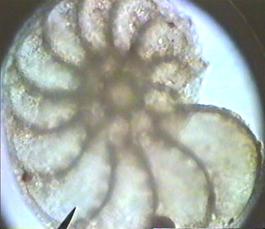 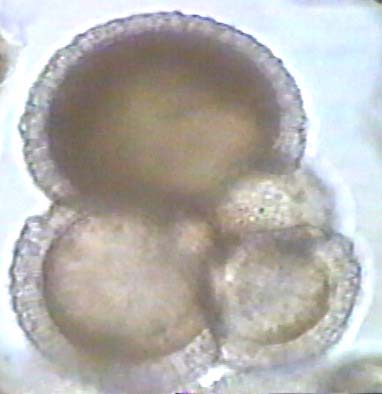 Radiolarans are also related to amoebas and make a skeleton of silica. They are half the size of foraminiferans and live in marine plankton. The earliest are known from the early Cambrian and they became more complex throughout the Paleozoic. There is a mass extinction of radiolarians at the end of the Permian. 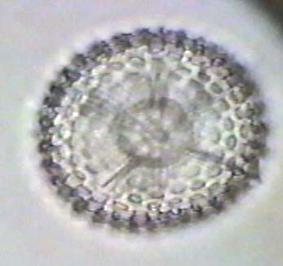 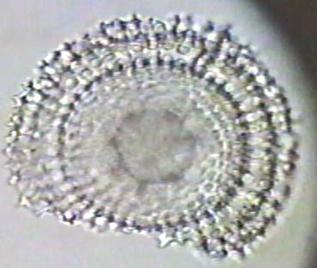 Diatoms are a unicellular, microscopic form of algae which also makes a shell of silicon and fossilizes well. The following images are of fossil radiolarins &  diatoms. 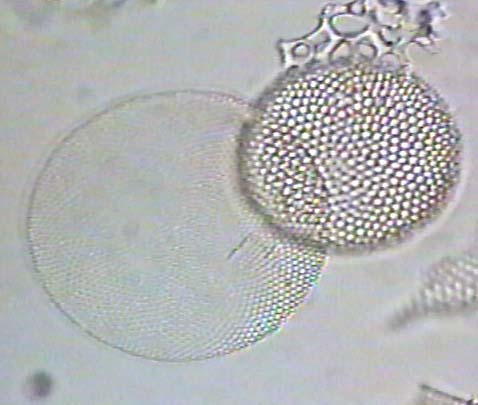 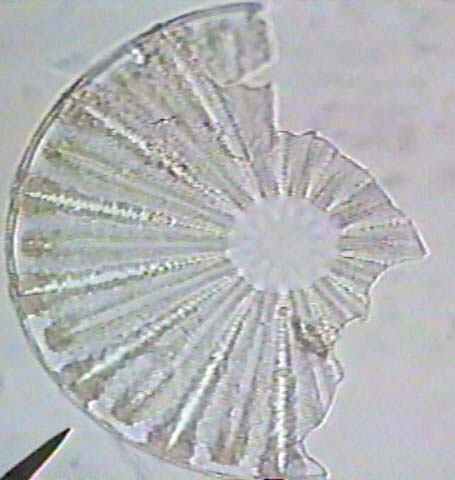 The following are images of fossil freshwater diatoms. 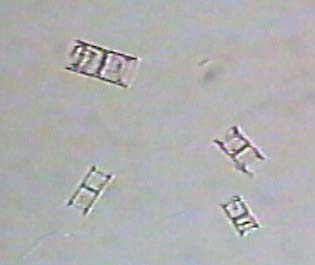 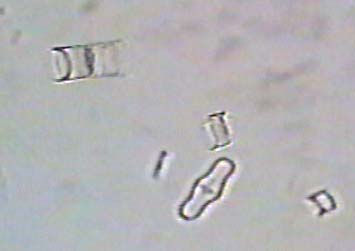 Acritarchs were a group of more than 100 species of phytoplankton (many of which were probably green algae). After the Precambrian glaciation of about 600 million years ago, acritarch diversity increased significantly. Acritarch diversification was followed by a diversification of the Ediacaran animals. Many of these acritarchs became extinct before the onset of the Cambrian (Moczydlowska, 2005; Willman, 2006). Diverse assemblages of acritarchs inhabited the open water and bottom environments in the Edicaran and Cambrian periods (Zang, 1992). Although most acritarchs are thought to represent unicellular algae, multicellular algae and perhaps other organisms (such as fungi) may also be included. As a result, acritarchs probably represent a polyphyletic group. Acritarch extinctions in the late Precambrian may have been cause by herbivory by Ediacrana animals (Huntley, 2006). Acritarch diversity increased through the Neoproterozoic to the Cambrian (Tiwari, 2009).

A giant modern amoeba is known to make tracks which might be interpreted as worm trails and Precambrian trace fossils may represent impressions by giant fossil protists (Matz, 2008). One group of single-celled protists, the choanozoa, appear to be the sister group of animals (Brooke, 2003)

Why sex? Asexual reproduction has many advantages: each individual can reproduce (the population grows much more quickly than sexual populations), immigrants to a new area can populate it instead of being celibate for life, and individuals can pass on their good genes to their offspring without the possibility of the mate providing a horrible set of genes. Sexual reproduction not only lacks in the above aspects, in higher organisms it also leads to enormous energy output and even life-threatening sacrifices.

The only advantage to sexual reproduction that compensates for all of these disadvantages is that it produces variability in offspring. Variable offspring are more likely to have at least some individuals that are resistant to new parasites or environmental changes. After the advent of sexual reproduction and the ability to produce such variable

Eukaryotic cells had evolved and they could reproduce sexually. Atmospheric oxygen levels increased, in part produced by changes in the processing of marine organic matter (Logan, 1995; Knoll, 1996).Finally, the climate stabilized.

In the late Proterozoic, the earth experienced a number of great changes. The landmasses, which had been united in a supercontinent known as Rodina, began to separate.  Although there are other hypotheses (such as a change in the inclination of the earth’s orbit so that what is now equatorial regions were polar and frozen), severe ice ages are the best explanation for unusual geological data of the Late Proterozoic Eon (Hoffman, 2002). Precambrian glacial deposits have been found on every continent except Antarctica. Separate glaciations seem to have occurred 850 million years ago (plus/minus 50 million years), 740 million years ago (plus/minus 20 million years), and 650 million years ago (20 million years (Fedonkin, 1990; Kerr, 1998; Muller, 2001). At its coldest, the temperature of the earth may have dropped to 50oC. Such frigid global temperatures would have frozen all landmasses and the oceans might have been covered with ice sheets. Life may have been restricted to hot springs and other areas of geothermal activity and to meltwater pools on the surface of the ice. Photosynthesis preceded the formation of “Snowball Earth” of 2.3 billion years ago. The release of oxygen into the atmosphere could have led to the conversion of the powerful greenhouse gas methane into the weaker greenhouse gas carbon dioxide and thus a cooling of the planet (Kopp, 2005).Carbon isotope data suggests that the biological activity in the oceans prior to this glaciation virtually ceased. These glaciations may have caused the extinctions of microscopic protist-like organisms referred to as acritarchs (Chuanming, 2001). Given some of the simple prokaryotic and acritarch fossils from the time of the glaciation, a “Slushball Earth” with open ocean available at least seasonally may be more likely than a “Snowball Earth.” ( Moczydłowska, 2008). Without evaporation from the oceans and the resultant rain, carbon dioxide from volcanic activity would have accumulated unchecked. Carbon dioxide levels would eventually greatly exceed modern concentrations (maybe by a thousand times) and this would lead to the warming of earth. This warming might have been quite extreme, perhaps to 50 degrees Celsius (Hoffman, 1998; Minnerop, 2000; Knoll, 1986).

At the end of the Precambrian, the Pacific edges of North America, South America, Australia, and Antarctica were formed. The western part of North America seems to have been joined to Antarctica at that time (Dalziel, 1985). Late Proterozoic glaciations and the subsequent diversification of animals may be linked to the breakup of the early supercontinent of Rodina (thought to have occurred around 750 million years ago). The southern supercontinent of Gondwana began to form around 500 million years ago (McCall, 2006).

By the end of the Proterozoic, the climate had stabilized, oxygen had accumulated in the atmosphere, and eukaryotic cells existed which were increasing their variability through sexual reproduction. What came of this? The animals.