EARLY OSTEICHTHYANS AS TRANSITIONAL FOSSILS
“Osteichthyan” is the name given to the group of bony fish and tetrapods.  The origins of the osteichthyans (and indeed, all the early gnathostomes) are unclear given the fragmentary nature of the fossils of the Ordovician and Early Siluran fossils found to date.

Early osteichthyans date from the Silurian and Devonian Periods and are considered transitional because they possess traits found in more primitive groups of fish (placoderms, cartilaginous fish, and acanthodians) that no later bony fish possess.  Guiya and Psarolepis resembled sharks, placoderms, and acanthodians in its pectoral girdle and median fin spine (Zhu, 2009; Zhu, 1999). At least four basal osteichthyans (Ligulalepis, Achoania, Psarolepis, and Styloichthys) possessed eyestalks which had previously only been known in sharks and placoderms (Zhu, 2001; Zhu, 2002).  The basal osteichthyan Lophosteus was similar to acanthodians (Qu, 2010).  Ligulalepis similar to placoderms in its eye muscles (Young, 2007).

In 2009, the Chinese fish Guiyu oneiros (meaning “dream ghost fish”) was discovered from Lower Siluran rocks 419 million years old, making it the oldest osteichthyan.  Since it can be classified as a sarcopterygian, it appears that the split in basal osteichthyans into the two groups of actinopterygians and sarcopterygians must have already occurred by this point.   Guiya resembles sharks, placoderms, and acanthodians in its pectoral girdle and median fin spine; it resembles sarcopterygians in its braincase; and it resembles actinopterygians in its scales (with a ganoine covering) and cheek region.  Eight of the nine known early sarcopterygians from the Late Siluran through Early Devonian are known from South Asia, indicating that this was an important region for the origin of this lineage (Zhu, 2009; Yu, 2010).  Galeaspids (jawless fish), placoderms, and sarcopterygians are known on China before anywhere else in the world (Zhao, 2010). 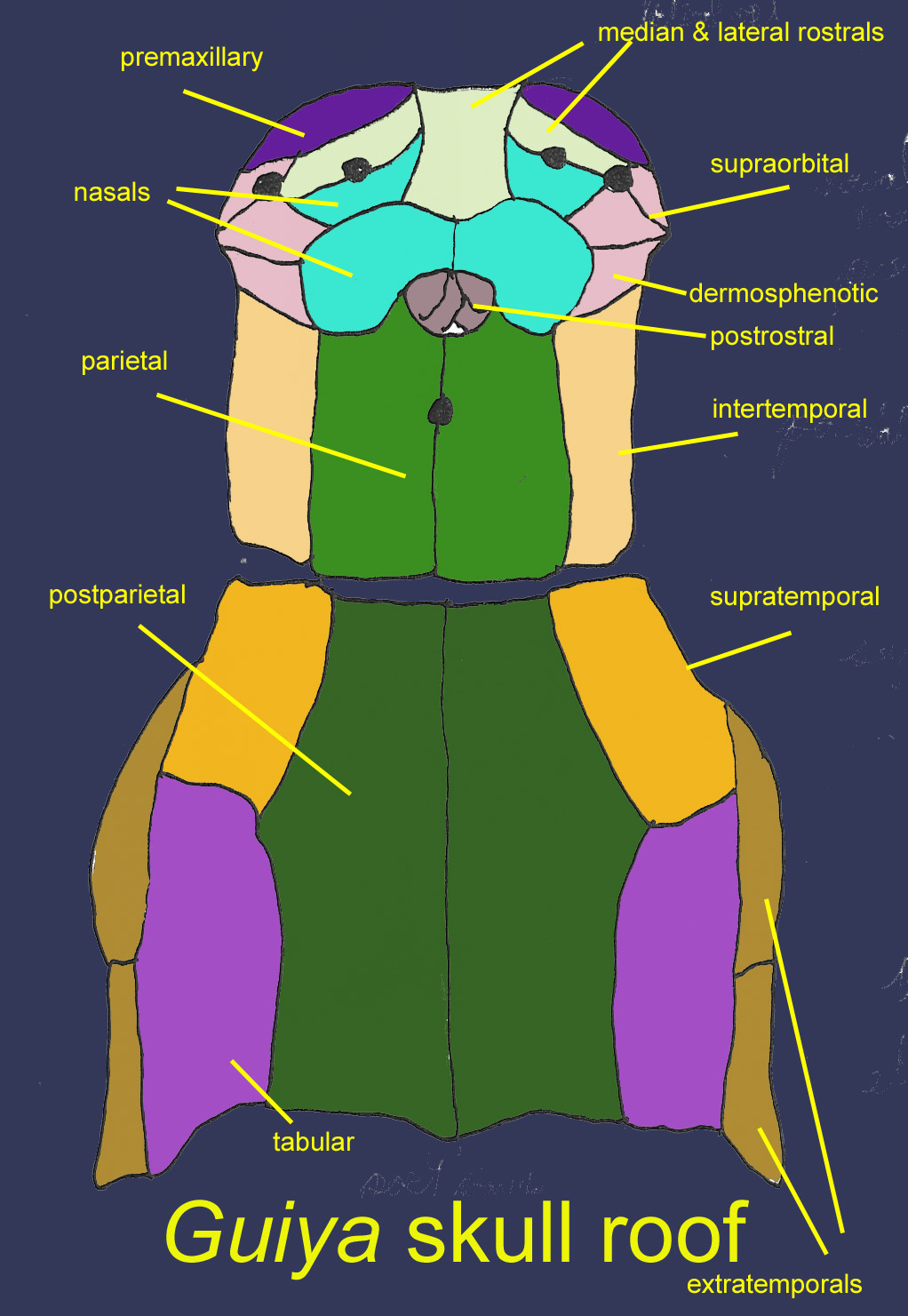 The top portion of Guiyu’s skull was dominated by pairs of parietal and postparietal bones with a joint between them.  Between the parietal bones was the pineal foramen for the “third eye”.  The anterior half of the skull roof also included toothed premaxillary bones and maxillary bones, 2 pairs of nasal bones, 1 median rostral, a pair of lateral rostral, pairs of supraorbital and dermosphenotic bones and a group of small postrostral bones.  The posterior portion of the skull roof also included pairs of supratemporal, tabular, extratemporal, and accessory extratemporal bones.  The single median rostral bone contacts the fused premaxillaries in Giuya but separates them and bears teeth in Psarolepis and Achoania.  Jugal, parasphenoid, ethmoid, vomer, and basisphenoid bones existed under the skull roof.  Guiya possessed a tooth-bearing homolog of the prerostral plate of placoderms which is not known in any other bony fish.  There are no lacrimal bones in the Guiya clade, suggesting that the lacrimal arose separately in actinopterygians and later sarchopterygians. (Qiao, 2010).

Dialipina has been classified as both the most basal osteichthyan and the most basal actinopterygian.  Its tail is triphycercal like many sarcopterygians and its pectoral girdle is comparable to the sarcopterygian Psarolepis but its shoulder, skull, fins, and ganoine scales link it with actinopterygians (Ahlberg, 2001, Zhu, 2001).  Ligulalepis possessed endochondral bone as do all later osteichthyans although this type of bone is absent in Dialipina and more primitive gnathostomes (Johanson, 2010).

Meemannia eos is a basal osteichthyan which has traits of both the actinopterygians (the skull) and the sarcopterygians (scales with a cosmine-like structure).  It is known from the Lower Devonian of China, about 405 million years ago.  It is considered as a sarcopterygian which possessed the most primitive form of cosmine scale known (Zhu, 2006)

The pectoral girdles of early osteichthyans shared features found in placoderms, acanthodians, and cartilaginous fish such as the prominent fin spines, the unpaired keeled bones (comparable to the median dorsal plate of placoderms).  Similarities also exist between the early actinopterygians and sarcopterygians in their pectoral girdles (Zhu, 2009; Zhu, 1999).

Palaeospondylus from the mid-Devonian is a primitive fish whose classification is currently under debate.  It lacks all bone and may represent a lineage more advanced than lampreys.  Some feel it represents a lineage of bony fish which subsequently lost its bone.  Other classifications of Palaeospondylus have included agnathan (given that there are no obvious jaws), unarmored placoderm, and larval lungfish (Johanson, 2010, Wikipedia).

The bony fish (Class Osteichthyes) can be subdivided into two groups: the ray finned fish (Actinopterygians) and lobe finned fishes (Sarcopterygians).  Each group is important for a different reason.  The ray-finned fish are the most successful vertebrates alive today, both in terms in the total number of species and the total number of individuals.  They compose more than 99% of both the modern number of species and the number of individuals of fish, dominating both freshwater and marine environments.  The lobe-finned fish have always been a minor group of fish but land vertebrates evolved from them.

One of the major differences between these two groups of bony fish is the type of fin.  In actinopterygians, the muscles that move the fins are located inside the body wall rather than being associated with the fin skeletal elements themselves and, in most, the fin must move as a unit.  In the lobe finned fish, the muscles that move the fins are attached to bony elements within the fin.  Vertebrate limbs evolved from sarcopterygian fins. 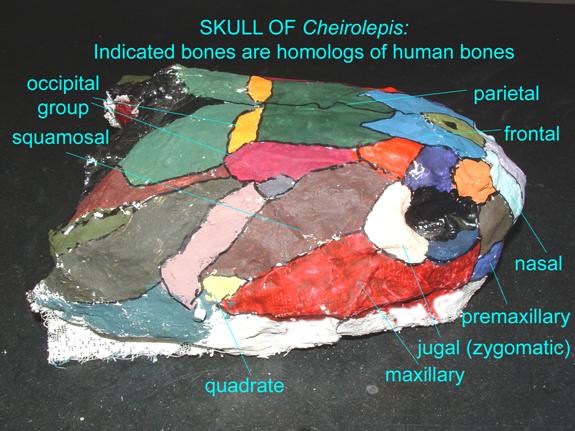 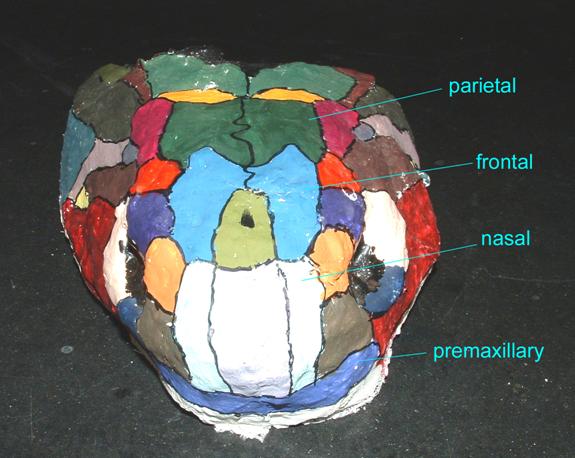 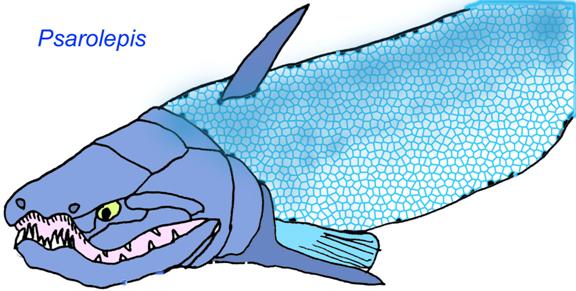 Androlepis was a primitive actinopterygian fish with spines and scales similar to acanthodians (Marss, ).  The fish Psarolepis is known from the Upper Silurian and Lower Devonian and is one of the earliest bony fish.  It possesses traits associated with primitive sarcopterygians (its skull and lower jaw) and primitive actinopterygians (its teeth on the median rostral bone and 5 coronoid bones in the lower jaw).  It also possessed a large pectoral spine in the front fin as in placoderms and acanthodians.  A large spine on its back is similar to that of sharks and acanthodians.  The broad size of bones in the pectoral girdle also resembles that of placoderms.  Psarolepis possessed a cleithrum with a large process similar to that of placoderms. (Min, from Ahlberg, 2001).  Psarolepis is either the most primitive known bony fish, predating the separation of the actinopterygian and sarcopterygian lineages or it is the most primitive sarcopterygian fish, dating from just after the split with actinopterygian lineages (Zhu, 1999). Cartilaginous fish (except chimeras), placoderms, and early bony fish possessed an eyestalk; modern bony fish lack this structure. In Psarolepis, the eyestalk has a structure similar to that of cartilaginous fish and placoderms (Maisey, 2005).

Scales of ray finned fish are known from the late Silurian and the first complete fossils from the early Devonian.  Actinopterygians were relatively uncommon in the Devonian. Dialipina, a fish measuring up to 12.5 cm, is the most primitive known actinopterygian.  It possesses parietal, postparietal, rostral bone, prorostral, and dermosphenotic bones in the skull, 2 dorsal fins, and triphycercal tail  (Schultze, from Ahlberg, 2001; Friedman, 2006). One fish, Leedischthys, could achieve lengths of 12 meters. Although virtually all modern ray-finned fish are classified in a group known as teleosts, they were the last group of actinopterygians to evolve. It appears that different lineages of actinopterygians adapted to freshwater environments separately. 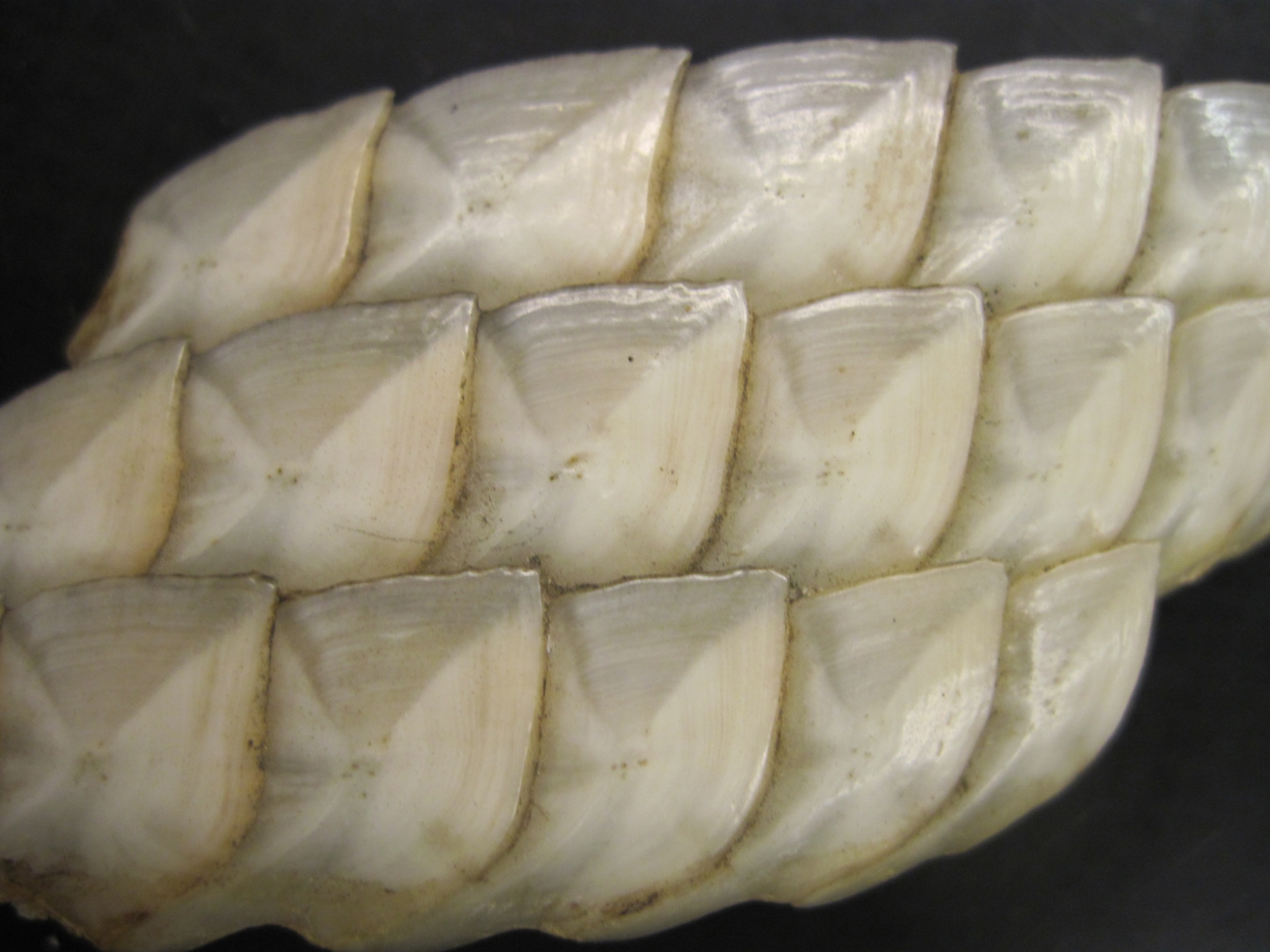 There are two main groups of actinopterygians: chondrosteans and neopterygians.  Chondrosteans are the most primitive actinopterygians.  Their internal skull was similar to that of primitive sharks and acanthodians and early species still had primitive sharklike (heterocercal) tail.  They were rare until late Paleozoic when they become the most common fish.  About 80 genera are known from that time. Most were small but a few could reach lengths of about a meter.  Most became extinct by the Triassic and virtually all of the rest became extinct by the Late Cretaceous.  There are only a few modern representatives of chondrosteans that still exist today such as sturgeons (the source of caviar) and gars ( a gar skull is pictured below) 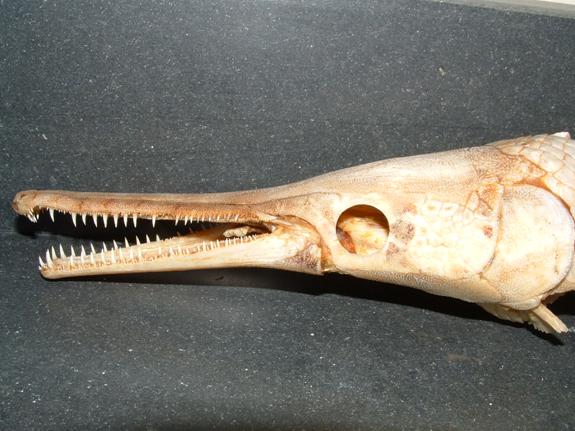 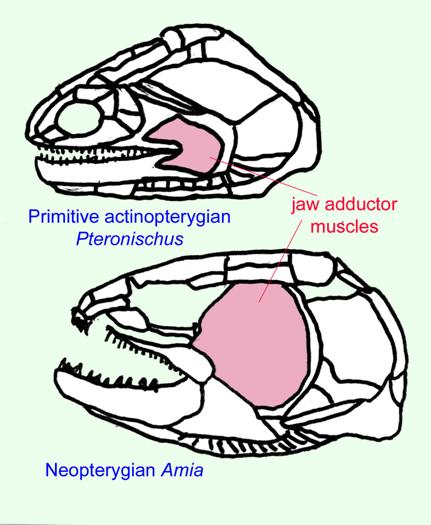 Neopterygians can be divided into two groups: the primitive neopterygians and the teleosts.  They differ from the chondrosteans in a number of characteristics such the separation of the upper jawbone (maxilla) from the cheekbones and the possession of a few new bones (such as the interopercular and supramaxilla) (Carroll, 1988). Primitive neopterygians (such as Parasemiontus and Prosanetes) evolved late in the Paleozoic, and most were extinct by the end of the Mesozoic (a few survived to the Eocene).  Only one genus, Amia, survives today (Carroll, 1988). 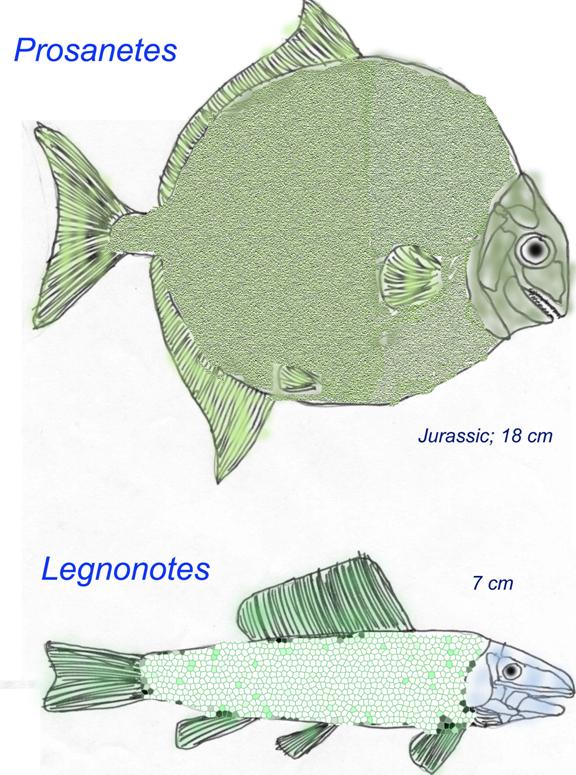 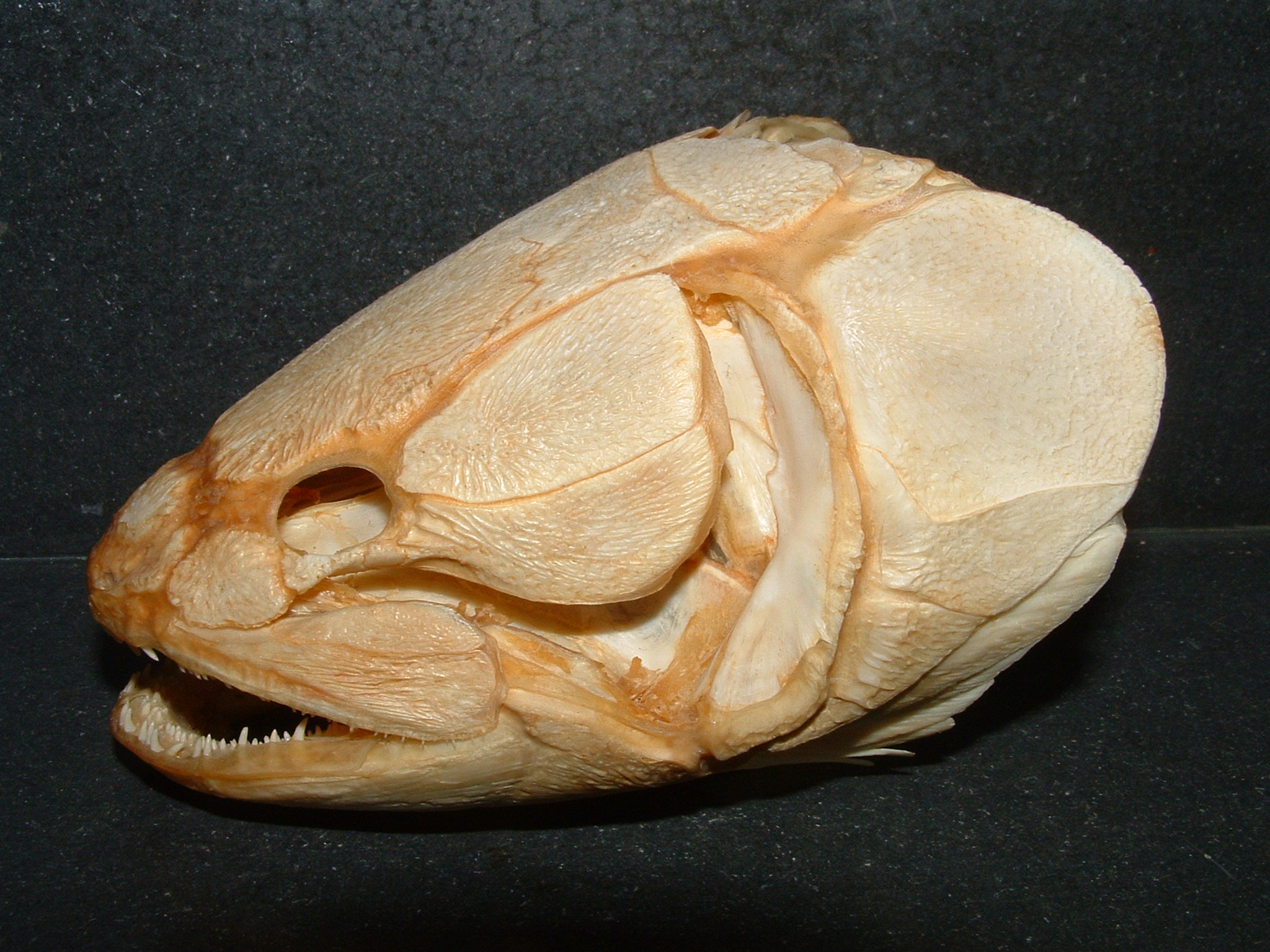 There are an estimated 27,000 species of actinopterygian alive today, which represents more than half the species of modern vertebrates. Teleosts compose more than 90% the fish in modern aquatic communities (Cavin, 2006).


Bony fish, amphibians, and reptiles often possess teeth on multiple skull bones, as is evident in the fish skull below.\ 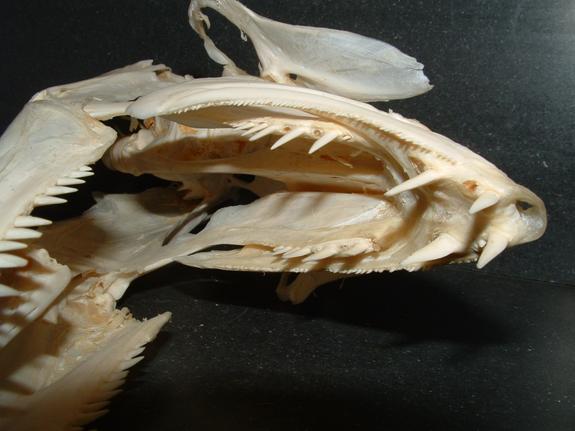